With the market at or near its all-time highs, it is more important than ever to hunt for bargains. One sector that looks attractive both on a historical level and relative to growth projections is the financial sector.

One company within that sector that offers a great value with relatively low risk is CBOE Holdings (NYSEMKT:CBOE), an operator of markets for trading options. Let's take a closer look at the company and why it's the best value of its peers that include well-known financial exchanges NASDAQ OMX (NASDAQ:NDAQ), NYSE Euronext (NYSE:NYX.DL), and CME Group (NASDAQ:CME).

A little about CBOE
CBOE -- which stands for Chicago Board Options Exchange -- operates several markets that specialize in the trading of options contracts on individual stocks, market indexes, and securitized baskets of like equities, such as exchange-traded funds (ETFs). The company also provides a marketplace for futures contracts and cash equities.

The company is the largest options exchange in the U.S. by contract volume, and has about a 30% market share of all options traded on U.S. exchanges. CBOE is a financially strong company, with no debt, and more than $225 million in cash. The company has a reputation for its proprietary products such as S&P 500 index options and CBOE Volatility Index (VIX) options and futures, and it is also known for its innovative trading technologies.

One of the biggest game changers for the options trading industry was the introduction of 24-hours-a-day trading, which CBOE has offered five days a week since February 1 of this year and should be a strong driver of revenue growth going forward. In fact, the company's revenue is expected to be about 18% higher than last year, in a large part because of the round-the-clock trading and CBOE's new London trading hub.

Why not pick another exchange?
Options trading to now is what discount brokerages were to the early 2000s. In other words, options are beginning to be understood and used by more investors than ever before, both as a hedging instrument and for their speculative value. As a result, it makes sense that over the foreseeable future, an exchange that makes its money from the trading of options would be better positioned to grow its revenue than one, which specializes in equities, like The NASDAQ OMX Group(NASDAQ:NDAQ) or NYSE Euronext(NYSE:NYX.DL).

While this makes perfect sense in principle, it only works as an investment if the stock's valuation, relative to its growth, looks better than its peers.

CME Group, for instance, trades for a very high valuation of 23.4 times this year's expected earnings.  CME absolutely is a great company, but after the 47% rise in share price so far in 2013, all of the "good stuff" seems to be priced into shares. The 13% projected forward earnings growth rate makes the valuation seem a little high, and there are better options out there.

NYSE Euronext has agreed to be acquired by IntercontinentalExchange (NYSE:ICE), so it would make more sense to look at that company's valuation. The company's share price has risen by more than 40% in 2013, and now trades for 24 times its anticipated 2013 earnings. With annual earnings growth projected to be around 15% on average over the next few years, it looks to be reasonably valued but not cheap.

Nasdaq has had a good year as well, with shares also up about 40%.  However, the company is looking much better than Intercontinental on a valuation basis, trading at just more than 14 times current year earnings. The consensus calls for 15% annual revenue growth, which sort of makes the valuation sound too good to be true. Bear in mind that there are some fundamental reasons for the "discount."

For instance, while Intercontinental has a positive net cash position (more cash than debt), Nasdaq has net debt of about $2.4 billion ($2.7 billion in debt versus about $300 million in cash and equivalents), which is significant for a company whose market cap is less than $6 billion.

This brings us to CBOE, which also has an attractive balance sheet with more cash than debt. At 26 times this year's expected earnings, it is the most "expensive" of the three. It also has a relatively modest 14% annual expected earnings growth rate. However, it could be the best value on a long-term basis because the options market is still in its infancy relative to the markets operated by the other companies.

This can be seen by comparing the companies' revenue growth over the past few years. It is apparent that CBOE is much more of a growth stock than either of the others. 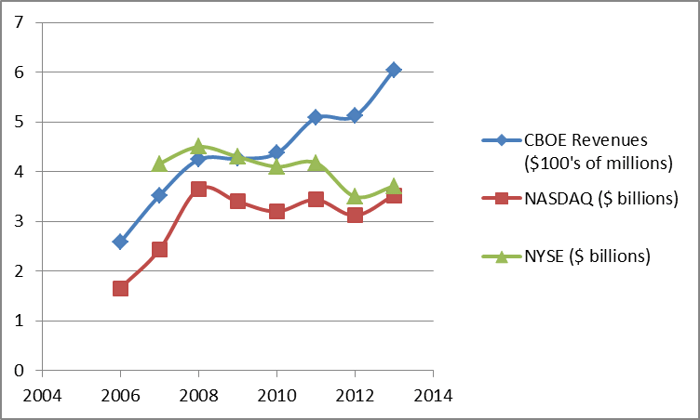 Final thoughts
So, while CBOE is the most "expensive" company here, it also has the most to gain over the long term. Nobody really knows the full potential of options trading, but we do know we haven't reached it yet. CBOE is the best way to play the fastest-growing part of the stock market for the next several years and beyond.