The current economic environment is being notoriously tough on retailers, and this makes it especially important to choose the right names when making investment decisions in the sector. TJX (NYSE:TJX) has a smart business model and a proven track record of success in both strong and weak economic environments. The company is gaining share versus the competition and it still offers plenty of room for growth over the coming years.

TJX is an off-price retailer of apparel and home fashions operating approximately 2,400 stores in the U.S. under its T.J.Maxx, Marshalls, HomeGoods, and Sierra Trading Post brands and more than 700 stores in Canada and Europe under the Winners, HomeSense, Marshalls, and T.K. Maxx brands.

The company has a leadership position in off-price retail, and it relies on a buying force of 800 people in 13 buying offices sourcing for products from more than 16,000 vendors in more than 60 countries. Its scale advantages, global presence and effective inventory management system mean that the company is uniquely positioned to manage large volume and disperse merchandise across different geographies to target specific markets.

The company provides department stores the opportunity to clear excess inventory at very favorable terms; TJX is willing to purchase less-than-full assortments of items, styles, and sizes, as well as quantities ranging from small to very large. The company pays promptly and usually doesn't ask for typical retail concessions like advertising, promotional, or return allowance.

This gives TJX significant bargaining power with suppliers, which the company translates into pricing discounts of between 20% and 60% versus traditional retail prices. The company has also developed a proprietary inventory management system that is singularly effective when it comes to matching store merchandise to local preferences and demographics.

Not many other retailers around the world can show that kind of resiliency through the ups and downs of the business cycle.

One of a kind
When compared to industry peers like Target (NYSE:TGT), Kohl's (NYSE:KSS), and J.C. Penney (OTC:JCPN.Q), TJX comes well ahead of the competition in terms of both revenue growth and profitability.

While J.C. Penney is going through a complex and risky turnaround, companies like Target and Kohl's have been doing relatively well during recent years due to their competitive prices in a challenging retail environment. But TJX has still managed to outgrow them by a wide margin. 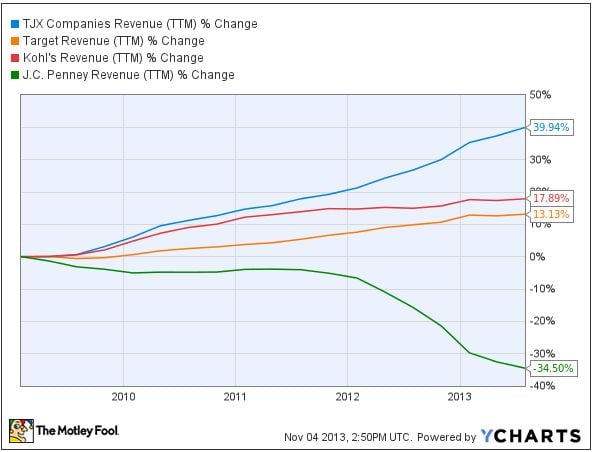 Also, the company is gaining market share while at the same time generating above-average profitability, so growth is not coming at the expense of profit margins or shareholders' returns. On the contrary, TJX has operating margins, net margins, return on assets, and return on equity materially above the competition.

Valuation and growth
When it comes to valuation, TJX trades at a considerable premium versus Target, Kohl's and J.C. Penney in terms of P/E, forward P/E and price-to-sales. However, the company clearly deserves a higher valuation due to its efficient business model, higher growth and superior profitability.

In such an aggressive and competitive business like retail, it may be a better idea to pay a premium for a high-quality company than trying to find bargains at the risk of positioning your portfolio in companies with deteriorating fundamentals.

In addition to that, TJX is still offering plenty of room for growth. Management believes the company will ultimately become a $40 billion business and, judging by its track record of success and efficiency over the last several years, I wouldn't bet against that prediction in the long term.

CEO Carol Meyrowitz has recently stated that the company has the potential to increase its store base by more than 50% in the company's current markets alone, and international expansion is offering plenty of room for growth over the coming years.

Europe could be the next growth phase for TJX; the company currently owns 400 stores in four European countries -- Ireland, Germany, and Poland -- and management has announced an acceleration of the company's growth plans in the Old Continent due to strong customer demand and the favorable real estate environment.

By the end of 2013 management expects TJX Europe to be worth about $3.5 billion, and significant growth opportunities should remain available beyond that level.

Bottom line
Retail is a tough industry, but TJX has an efficient business model and an enviable track record of growth and profitability. Even if the stock trades at a premium versus other companies in the industry, superior quality and long-term growth prospects justify that valuation.