The stakes were high for the announcement of third quarter results from industrial biotech company Solazyme (NASDAQ:TVIA). What updates would be given on the progress of the first two commercial facilities with partners Bunge (NYSE:BG) and Archer Daniels Midland (NYSE:ADM) in Moema, Brazil and Clinton, Iowa, respectively? Was the company on pace to hit its revenue guidance for 2013? What could investors expect in 2014? The results are in and, unfortunately, they aren't quite living up to Wall Street's expectations. 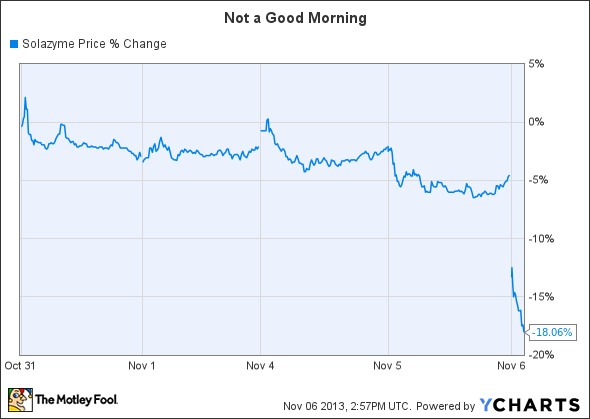 It wasn't exactly the way the company needed to start the first commercial quarterly update in a string that will span the next few years. Shares were getting walloped in after-hours trading and continued their pullback this morning, but it wasn't all bad news. Some of the delays even alleviate risks associated with quality control measures for its disruptive renewable oils platform. Is the drop an overreaction? And most importantly, what do investors need to know?

Financials
I'll point investors to the press release for full financial details, but here are the numbers that you should be focusing on:

Additionally, the company retired $41 million in debt in the third quarter by converting debt notes. The move boosted outstanding share count by about 5.5 million (to 68 million total outstanding shares), but saved approximately $11.7 million in interest payments over the life of the debt.

Solazyme continues to make steady progress with product revenue -- derived entirely from Algenist -- while maintaining a sustainable cash burn. Remember, the real leap in revenue will come from commercial operations at Moema and Clinton in the next few years. For now investors can be more than pleased with the numbers reported above.

Positive developments
We'll begin with the good news. In Brazil, Solazyme had its first microalgae strain approved by CTNBio -- a bioproducts regulatory agency for the country -- which is necessary to begin commercial operations. The strain will be used to produce oils for the recent supply agreement inked with longtime partner Unilever. Meanwhile, the company has begun manufacturing food ingredients at its demonstration scale facility in Peoria, Ill. and has fielded product sample requests from over 160 companies.

Sticking to product developments, Solazyme also announced the launch of a second skincare product line called EverDeep. The patented anti-aging cosmetic products will complement the Algenist line, target a new demographic, and feature a new ingredient discovered by the company named Algasome. It will take time to ramp sales to levels seen by Algenist, which fetched $4.8 million in the latest quarter, so investors shouldn't expect much in the short term. Instead, consider EverDeep a long term value creator for Solazyme's platform.

Manufacturing delays
The bad news begins with manufacturing -- the most important cog for Solazyme's future. Management stated that although commissioning was under way at Moema, commercial products won't be available until the first quarter. The one quarter delay is due to last-minute equipment upgrades installed at the biorefinery. Delays are never good, but the upgrades include additional automation and a more thorough cleaning system that will save time and eliminate contamination risks when switching between industrial and consumable oil profiles. No one wants textile lubricants in their ice cream!

There are ramifications for the ramp-up schedule and revenue expectations. The company no longer expects to achieve cash flow positive operations in 2014. That milestone would have occurred in late 2014 under previous guidance, anyway, but will now occur sometime in 2015.

At the end of the day, this was absolutely the right move and would have been necessary eventually. Think about it: why interrupt production six or twelve months from now to install these upgrades when engineering could do it today before Moema is even operating? Solazyme may have destroyed the models of Wall Street analysts today, but it saved potential disputes with customers and headaches with production tomorrow. This is just another reminder of the solid management team in place.

Lowered guidance
The real kick in the stomach occurred when Solazyme lowered its 2013 guidance. Take a look at how internal expectations were slashed across the board:

Product revenue expectations were lowered due to weaker than expected demand for Algenist products in Europe. Meanwhile, guidance for JDA and commercial revenue were slashed for two reasons. First, a major JDA that was previously expected to occur in the fourth quarter fell through. Investors would have never known about the JDA had management not included it in guidance earlier this year, so while it is a setback I wouldn't go too crazy thinking about it. Second, the company has decided not to pursue opportunities to sell fuel products that would have yielded revenue in the fourth quarter. Management reiterated that it is committed to fuel products, however. The near-term opportunities simply didn't make sense.

Couple the lower guidance with the dilution that increased share count by 8.7%, and it's no wonder shares are getting sent lower this morning. I wouldn't say this is an overreaction just yet.

How to think about manufacturing
Management made a point to remind investors and analysts that commercial ramp-up will not be linear, perhaps spurred by my recent article in which I called out Wall Street analysts for their lofty expectations. I made my model linear for simplicity, but was sure to remind readers that would not be the case:

The biggest weakness in this model is not knowing where to begin production. I arbitrarily chose to start at half of the maximum and set ramp-up to occur linearly -- with the same production gains occurring each month until nameplate is reached. In reality, ramp-up is an ongoing and unpredictable process that progresses as equipment is fine-tuned.

Solazyme is still expecting ramp-up to occur over a period of 12-18 months. However, the company will focus on the consistency and reliability of its platform in the first half of 2014 before ramping production considerably in the second half. Remember that this was always the plan and remains in-line with other industrial biotech facilities operating worldwide today. This means product revenue will be highly aggregated in the second half of 2014 and even more so in early 2015. Consider how early production will be accompanied by lower selling prices and margins, which gradually improve with production. There were no material updates to the company's manufacturing plans; the company simply wanted to eliminate any confusion with investor and analyst expectations. I'll discuss this in more detail in a dedicated article within the next week.

Two out of three ain't bad
Despite my recent call for management to answer three important questions about current and future operations, only two questions were sufficiently answered. Management stated the Solazyme Bunge Renewable Oils joint venture, or SBR, will not be consolidated this year, which played a role in lowered 2013 guidance. Consolidation will occur in 2014 once a set of predetermined operating procedures are met. Will that occur in the first half of 2014 or later in production? Investors still don't know.

For my second question, I'll assume that operations at Moema will not be interrupted by the sugarcane inter-harvest period in early 2014 due to the production delay. Fair enough.

The only question that was not answered concerned the ongoing lawsuit with Roquette -- the former joint venture partner for the company's nutritional products. In fact, the word "Roquette" was not mentioned once on the conference call. Perhaps it isn't a big deal after all, but I would still keep an eye out for this story since I can't fathom how a lawsuit isn't important for investors.

Foolish bottom line
Due to the unpredictability of Solazyme's prospects, perhaps it's best for investors looking to begin or add to a position to buy steady chucks of shares over a long period of time. That will smooth out entry points and take the guesswork out of your investment.  I would also caution investors against putting too much faith into writers and analysts that remain unapologetically bullish about the company, since more delays and setbacks are still a possibility. The recent quarter wasn't all bad news, but it did remind investors that delays and setbacks are inevitable. That being said, there is room for plenty of optimism in the company's long term outlook -- I just don't think investors need to worry about missing the opportunity to tap into the growth. Pullbacks like today are stark reminders of that.