Although they are household names, a recent survey showed the market opportunity that still exists for companies we all likely know and know well.

According to Inman News, a survey showed most real estate brokers had a relatively positive opinion about the three principal online real estate sites of Zillow (NASDAQ:ZG), Trulia (NYSE: TRLA), and Move's (NASDAQ: MOVE) Realtor.com and while they have a positive opinion of the sites, the opinions about each varied greatly.

The survey
The survey was conducted by Imprev, a real estate marketing service, which solicited the opinions of 260 brokers and franchise executives, of whom nearly 70% of the respondents oversaw brokerages with more than 100 agents.

Surprisingly, the story declared that "the bottom line was that brokers still see traditional methods of drumming up business like open houses, yard signs, walk-in business and getting in touch with past clients as a better value than national portals."

However, of the three listing services, Zillow caused the biggest amount of concern for the brokers, with more than 45% of brokers believing Zillow could have a negative or somewhat negative impact to their business, as shown in the chart below: 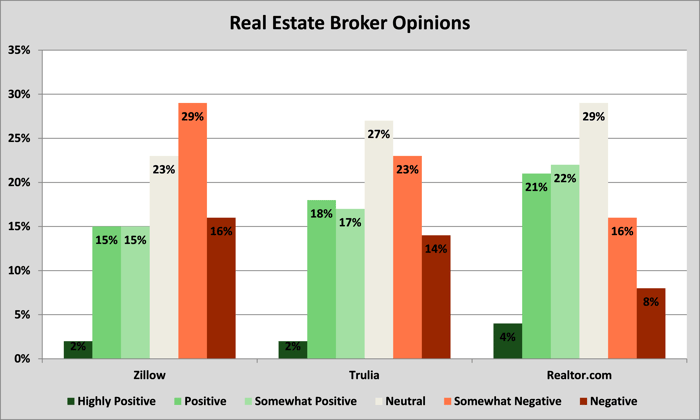 The study also found that only 3% of the brokers depended on the portals for more than half of their leads, and eight out of 10 brokers said these services accounted for less than 20% of their new business. In fact, the story added "brokers were much more likely to rely on their own websites, referrals and past clients for leads," and 67% of respondents that those three sources accounted for more than half of the leads generated.

The brokers also did not consider Zillow, Trulia, and Realtor.com as providing "exceptional value," with only 2% feeling that way. However 63% felt the traditional avenues such as open houses, yard signs and walk-ins provided exceptional value. As it relates to the specific services, realtor.com had the highest amount of brokers that considered it to provide reasonable value at 41%, while Trulia and Zillow were nearly even at 32% and 31%, respectively.

What it means
Although the services like Zillow, Trulia, and Realtor.com are all likely household names at this point, stories like this demonstrate how much potential room for growth still exists for these companies in the real estate industry. The fact that there is still so much business generated outside of the services shows that the growth runway is still immense for these market disruptors.

Consider that in a recent conversation with The Motley Fool, Zillow CEO Spencer Rascoff noted that real estate agents pay between $6 billion to $10 billion in advertising, and Zillow only has around 3% of that market, demonstrating the immense potential that exists for the company. Yet it is certainly capitalizing on that potential, as evidenced by their 67% increase in revenue year over year and a 75% increase in traffic to the website.

Although it certainly doesn't seem like it, the web-based realty industry is still in its infancy, and there is still ample growth ahead for the companies at the top. Considering that Zillow generated the greatest amount of fear in the eyes of the brokers, it likely means that it still remains in the top position to disrupt the real estate industry and become the market leader.