Investors love stocks that consistently beat the Street without getting ahead of their fundamentals and risking a meltdown. The best stocks offer sustainable market-beating gains, with robust and improving financial metrics that support strong price growth. Does Motorola Solutions (NYSE:MSI) fit the bill? Let's take a look at what its recent results tell us about its potential for future gains.

What we're looking for
The graphs you're about to see tell Motorola's story, and we'll be grading the quality of that story in several ways:

What the numbers tell you
Now, let's take a look at Motorola's key statistics: 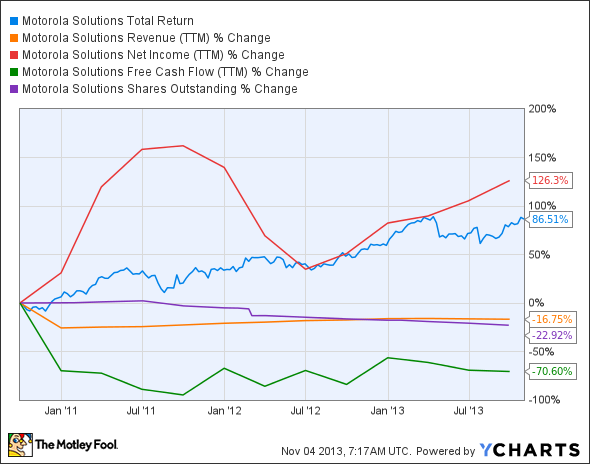 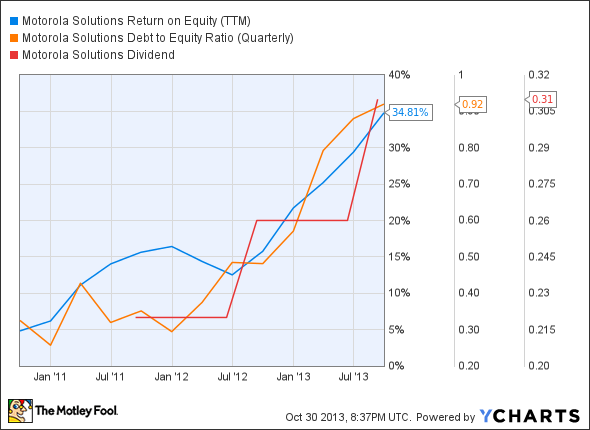 How we got here and where we're going
We first looked at Motorola last year, and it's earned six out of nine possible passing grades in its second assessment, the same number it earned earlier. Free cash flow has fallen since last year, but the company's dividend payouts have increased at a greater rate. These trends might indicate the loss of a passing grade or two next year if the company remains committed to dividend payouts despite declining free cash flow. Can Motorola improve its flagging revenue and turn around a weakened free cash flow position? Let's dig a little deeper to see what Motorola might be up to for the coming year.

Over the past few quarters, Motorola has been struggling to push its revenue higher due to weakness in its government business, thanks in no small part to the U.S. sequester -- the American government now accounts for about two-thirds of its overall revenues. My Foolish colleague Rich Smith points out that Motorola recently secured some smaller government contracts, despite unpleasant fiscal conditions in the U.S. The Department of Defense awarded the company a $16.9 million contract to offer land mobile radio support services in Kuwait.

However, this is not enough to move the needle -- Motorola needs some billion-dollar contracts, or at least something in the nine figures. The problem is worse for Motorola than for fellow tech contractor Harris (NYSE:LHX), which seems to be picking up more government money to supply radios than its peer, in addition to its other telecommunications work. Motorola is almost entirely dependent on its radio sales today, and if Harris is outperforming it, there may not be much reason to expect growth ahead.

Fool contributor John Divine notes that Motorola's enterprise solutions segment has also been quite slow to launch new products, which led to a substantial reduction in its full-year revenue forecast. According to Reuters, the release of Motorola's Windows 8-based enterprise handhelds has been delayed until next year, which has weighed on the company's enterprise segment. The launch of these new products should enable Motorola to win some of the deals that were deferred due to macroeconomic uncertainties this year, and that might finally improve its weak revenue position. Motorola's RhoElements application framework is also expected to drive growth in enterprise-based applications, and its acquisition of Psion will help it to expand globally and strengthen its mobile computing portfolio.

Motorola could also benefit from the increasing adoption of LTE mobile networks for public safety in the domestic and overseas markets. Last year, the government approved a payroll tax bill that allows the Federal Communications Commission to auction off TV spectrum for wireless services. The FCC later reallocated the D block spectrum for public safety purposes, which is right up Motorola's radio-focused alley, provided it isn't undermined by Harris or other contractors.

Putting the pieces together
Today, Motorola has some of the qualities that make up a great stock, but no stock is truly perfect. Digging deeper can help you uncover the answers you need to make a great buy -- or to stay away from a stock that's going nowhere.