Investors love stocks that consistently beat the Street without getting ahead of their fundamentals and risking a meltdown. The best stocks offer sustainable market-beating gains, with robust and improving financial metrics that support strong price growth. Does Sirius XM (NASDAQ:SIRI) fit the bill? Let's take a look at what its recent results tell us about its potential for future gains.

What we're looking for
The graphs below tell Sirius XM's story, and we'll be grading the quality of that tale in several ways:

What the numbers tell you
Now, let's take a look at Sirius XM's key statistics: 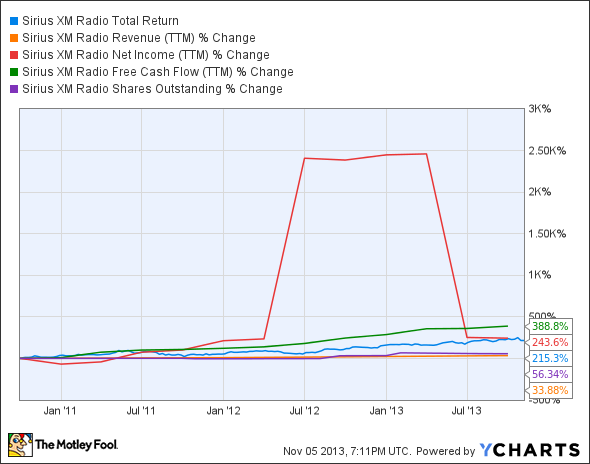 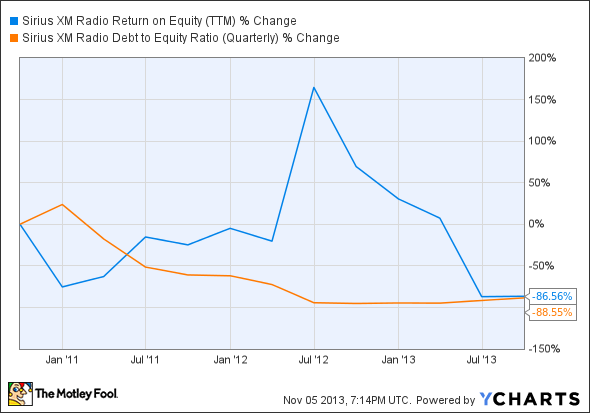 How we got here and where we're going
We looked at Sirius XM last year, and it has once again earned six out of seven possible passing grades, the same as it did last year. That's still quite impressive, since few companies can manage to grow so briskly for years at a stretch without something falling by the wayside. Promising revenue growth, improving profit margins, and declining debt-to-equity levels all contributed to Sirius XM's good showing today. How might Sirius XM attack its one weakness -- a declining return-on-equity level -- to gain that rare perfect score next year? Let's dig a little deeper to find out.

Sirius XM is poised to benefit from a long-awaited rebound in the U.S. automobile market, as it expects to soon push the number of both its active and its dormant receivers beyond 50 million. But the company is also diversifying into promising new arenas, as it's acquired Agero's connected vehicle services business for $530 million in cash, which will enable it to strengthen its market position in telematics services. The deal could pose a threat to General Motors' OnStar, since that service alone now costs $19.95, which is more than Sirius XM's satellite subscription despite the fact that a number of drivers can get similar services on their smartphones. But tying telematics to satellite radio could bring in a number of on-the-fence customers who are either behind the smartphone curve or who prefer the premium service OnStar-type offerings are supposed to provide.

Longtime Fool contributor Rick Munarriz notes that Sirius XM has also expanded its existing business relationship with automaker Honda, which will run through 2020. Honda's American subsidiary has agreed to install Sirius XM's radio receivers in its entire lineup, from the premium Acura badge to the compact Honda Fit and hybrid Insight. Sirius XM has also been trying to bolster its position in Latin America, as it's recently launched a Sirius XM Espanol satellite package for just $5.99 per month. The company also announced a huge $2 billion stock repurchase program, which will include $500 million of common stock held by majority stakeholder Liberty Media, which is expected to close by April 2014. That's a big turnaround from the onetime cash-bleeding company near bankruptcy.

But Fool contributor Dan Newman notes that Apple's iTunes Radio streaming platform, which has brought in more than 20 million iOS 7 users since its release, could present a major threat to both Sirius XM and Pandora -- at least if Apple ever decides to go all-in with content acquisition. That seems unlikely, based on Apple's history, so this may become a net benefit for Sirius XM if it muscles an in-car competitor out of the way. At the moment, Apple's new service is primarily a threat to straight-up streamers.

Fool contributor Adrian Campos points out that Sirius XM's ability to acquire premium content while offering reasonable prices allows it to lure more listeners than might be otherwise drawn to Internet radio competitors. But Sirius XM has recently announced an increase in its core monthly subscription to $14.99 from January onward, which points to a strengthening of its pricing power despite such competition. In its latest quarter, the company's net subscriber pool increased by 513,000 users to 25.6 million, and CEO Jim Meyer believes that customers will not cancel their subscriptions due to a price increase, as they perceive substantial value in these premium offerings.

Putting the pieces together
Today, Sirius XM has many of the qualities that make up a great stock, but no stock is truly perfect. Digging deeper can help you uncover the answers you need to make a great buy -- or to stay away from a stock that's going nowhere.