The cultural DNA that makes Costco (NASDAQ:COST) such a dominant player in the United States can be found in every aspect of its Latin American counterpart, PriceSmart (NASDAQ:PSMT). Costco once owned PriceSmart, where co-founder Sol Price's philosophy of passing along great deals to customers while providing a top-rate work environment is the spitting image of what Costco co-founder Jim Sinegal accomplished at his company.

That's why, back in June 2011, I put a significant portion of my retirement savings into purchasing PriceSmart shares. As you'll see below, it's been a great investment that I have no intention of selling -- but at this point, it appears to be too pricey to encourage fellow Fools to buy additional shares.

One of the things I love best about PriceSmart is that management refuses to rush expansion plans. Currently, the company has only 31 warehouse stores largely spread across tiny Caribbean and Latin American countries. Instead of going on a building blitz throughout South America -- where investors see the most potential for growth -- PriceSmart has elected to follow a slow, steady, and methodical approach.

The company moved into Colombia two years ago, its first foray into a continent that is ripe for membership/club-type warehouses. Wal-Mart (NYSE:WMT) has a strong presence in Brazil, but not outside of that single country. That leaves a large population and a number of growing economies up for grabs.

Since the opening of the first warehouse store in Barranquilla, Colombia, PriceSmart has added two locations in Cali. All three appear to be performing exceptionally well.

One look at the company's growth in both membership and revenue shows why my initial investment in PriceSmart is up 140%. 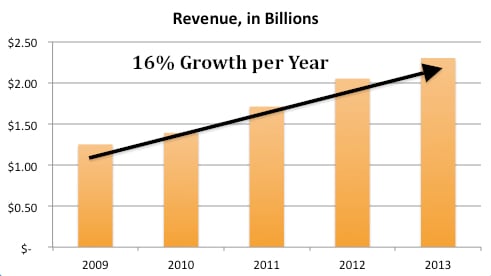 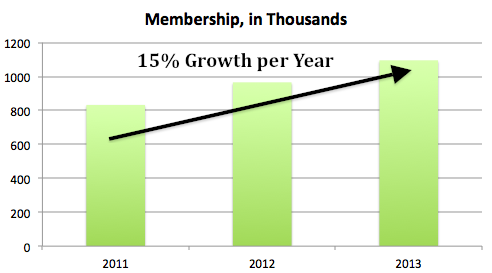 An expensive stock
Because this is a quality company with experienced management carrying out a solid business plan, I do not intend to sell my shares at any point in the near future. At the same time, however, it would be a mistake to tell other Fools that this is a "screaming buy" at these prices.

Take a look at the difference between how PriceSmart was valued when I bought shares and where it is today.

What does this tell us? For starters, improved optimism has accounted for a large part of the stock's increase. It's not that the company doesn't deserve that optimism; it most certainly does. But whether it deserves this level of optimism is another question.

Over the past month, PriceSmart shares are up more than 20%. Though the company is showing impressive same-store sales growth, this is nothing new. The biggest reason for the bump in optimism likely comes from the fact that management talked about testing the market in Bogota, Colombia, with an online delivery system and tentative plans to build a warehouse in the country's capital.

While that's certainly exciting, I think investors would simply be better served by looking elsewhere until PriceSmart enters a more attractive buying range.