Last December, when Call of Duty: Black Ops II hit $1 billion in sales in 15 days, he proclaimed, "Since Call of Duty was launched, cumulative franchise revenues from players around the world are greater than current worldwide box office receipts to date for the top-10 grossing films of 2012 combined."

Kotick also noted that life-to-date sales of the Call of Duty franchise had, at the time, topped worldwide theatrical box office receipts of both the Harry Potter and Star Wars franchises. 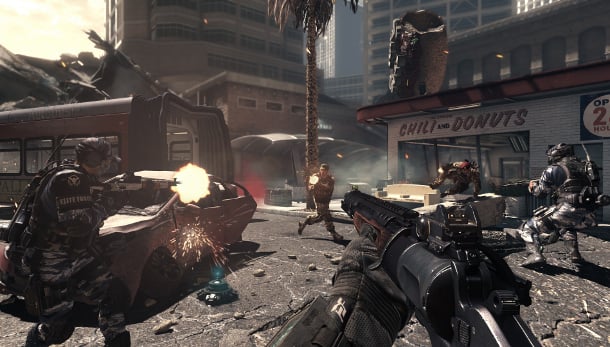 Whether you love or hate him, it seems that Kotick is indeed onto something -- sales of Call of Duty: Ghosts recently hit the $1 billion milestone in a single day -- easily topping Black Ops II's previous franchise record as well as the three days it took for Take-Two's GTA V to hit the $1 billion mark.

Just to be clear, however -- that stunning $1 billion in a day figure only reflects sales to retailers, and not necessarily to consumers -- whereas its previous figure for Black Ops II included sales to both retailers and consumers.

The rule of diminishing returns hasn't applied ... yet

Yet what's even more incredible is that unlike the movie industry, which often faces diminishing returns with franchise sequels, the Call of Duty franchise hasn't slowed down yet. Sales actually accelerated at a breakneck pace since Call of Duty 3 (2006), the last World War II themed game in the series.

The first installment of the game set in modern times, Call of Duty 4: Modern Warfare (2007), sold approximately 15.7 million units worldwide -- a 120% increase from the total of Call of Duty 3 units sold. However, this was only the start of a steep upward climb for the franchise, as seen below.

Looking at that chart, it's hard not to admire how Activision releases a new Call of Duty like clockwork every November to cash in on the holiday season. However, it appears that sales could be peaking -- the 26 million unit threshold appears to be a tough barrier to crack.

The Cult of CoD is a self-sustaining beast

What arguably keeps Call of Duty sales churning from year to year is its self-sustaining, cult-like appeal. On the surface, Call of Duty isn't a terribly innovative first person shooter (FPS), and it's not a favorite of critics, either.

Simply take a look at how Ghosts fails to stack up to some comparable FPS titles, based on average scores at Metacritic, which aggregates review scores from major sites across the Internet.

By comparison, the highest rated Call of Duty ever was the first Modern Warfare game, which earned a score of 92. Therefore, if critical reception to the newer Call of Duty titles has cooled, why are sales still soaring?

That can be explained by some simple comparisons to two other companies -- Apple (NASDAQ:AAPL) and Facebook (NASDAQ:FB). Just like Apple's fans will inevitably camp out in front of stores every time a new iPhone is released, Call of Duty fans can be expected to line up to claim the game the moment it hits store shelves.

Lining up for the latest Call of Duty game has become a tradition for many gamers. Source: Standard.co.uk

Just like Facebook, many people don't play Call of Duty because it's the best FPS shooter on the market -- they simply play it because that's where all there friends are. Therefore, Call of Duty shares that self-sustaining social quality with Facebook -- it's a snowball that progressively gets larger and larger, until it is impossible to stop. And just like Facebook, it's created a fair number of stereotypical personality archetypes, which were humorously analyzed in this recent article on Game Informer.

That's where blockbuster multiplayer games like Call of Duty shine against Hollywood films -- beyond going to the movies with friends and chatting about them, there's no real self-sustaining social aspect of films. In addition, films also rarely attract huge cult followings that prompt fans to camp out in line for tickets -- with Star Wars and Harry Potter being rare exceptions.

That's precisely why Activision's Call of Duty hasn't been dragged down by the rule of diminishing returns, even after 10 main releases and notably stagnant innovation -- it's a self-sustaining beast.

Will we ever see the end of Call of Duty?

For better or worse, Activision's Call of Duty strategy has shaped much of today's market for triple-A games, in which new releases for expensive core franchises are expected on an annual basis. For a game like Call of Duty, which relies more on its multiplayer mode than its single player one, annual updates are a viable strategy.

However, other companies that create more story-driven games, such as Electronic Arts' (NASDAQ:EA) Bioware studio, could end up sacrificing quality to rush a release into the holiday season. Two of Bioware's recent installments to its core franchises, Dragon Age 2 and Mass Effect 3, were both harshly criticized for being rushed and incomplete in comparison to their predecessors. To keep up with the pace of game releases set by Activision, Ubisoft added more and more studios to its Assassin's Creed team to release new installments of the franchise annually.

For now, it's doubtful that we will see the end of the Call of Duty franchise anytime soon, even if sales of Ghosts start to peak at around 26 million units. Activision will keep this cash cow, which generated $8 billion in life-to-date revenues at the end of fiscal 2012, alive for as long as possible.