Whiting Petroleum and Caobt Oil & Gas have shown that cost per well isn't the only way to look at how we evaluate performance anymore.

We all know that oil and gas are commodities. Thanks to the boom in oil and gas production here in the U.S., these commodities are much cheaper than in other places around the world. For oil and gas investors, though, cheap prices mean exploration and production companies need to keep their operating costs low. One metric that has been scrutinized by energy investors and analysts to measure this is well completion costs. Today, though, both Whiting Petroleum (WLL) and Cabot Oil & Gas (CTRA 1.74%) are proving that this metric is not as effective as it once was. Let's take a look at what Whiting and Cabot have discovered and how it changes the way we should evaluate these companies.

The game has changed
You could say that the revolution in shale drilling took off when Mitchell Energy spudded the first shale well in the Barnett Shale, but several years later, I would argue that the revolution is still taking place. Many companies across the U.S. are still finding new ways to cut costs on wells and make their operations more efficient. Even some of the fastest-growing companies in shale drilling like Kodiak Oil & Gas (NYSE: KOG) and Halcon Resources (HK) are actually sacrificing some production growth to test ways to get more from each suite of wells they are drilling on a pad.

One way that we have gauged the performance of shale drillers has been how much it costs to drill and complete a well. Over the past year, there have been some fantastic results on this end. Kodiak has been able to reduce its well costs by more than 10% over the past year, and Halcon has dropped well costs by more than $1 million in its El Halcon play.

These results are all well and good, but Whiting has stumbled upon something during some of its most recent well completion tests. By changing to a cemented liner, a fracking technique known as plug and perf, and using more proppants such as sand and ceramics, it was able to get much better-performing wells. Whiting estimates that using this well completion technique, it was able to achieve initial production rates that were 75% higher than a well drilled on abutting acreage using the more tried method of using what was called a sliding sleeve.

How is this possible? The new method of plug and perf does a better job of breaking down the shale formation and the cemented liner allows for cleaner flows out of the well. 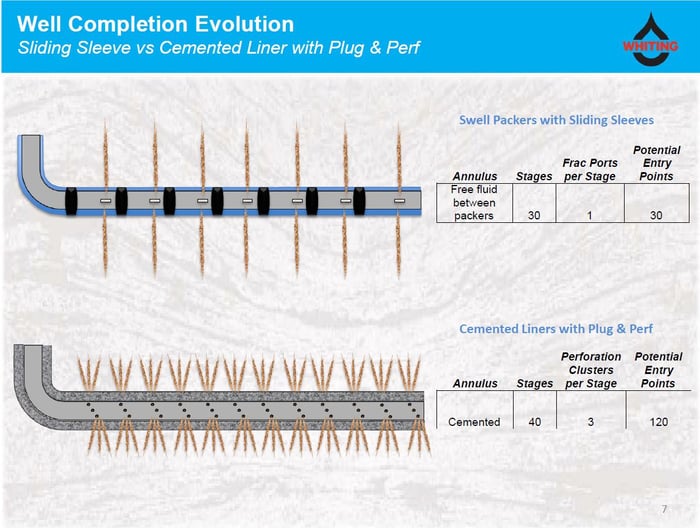 Now, your first thought is probably "Sure, the initial production is higher, but it probably means that the well will not last as long." Not so fast. According to Whiting CEO James Volker, the decline rate for these new wells is actually behaving the same as wells using other completion methods. The one catch with all of these new techniques is that they are more expensive to do.

On the other side, you have Cabot, which is looking at increasing the amount of fracture stages it will do per well. In the Marcellus, Cabot is expecting costs per well to increase its per-well budget by $250,000-$500,000 to do more fracturing stages and longer drilling lengths. So far, these costs have been well worth it because the company is drilling wells with the highest estimated ultimate recovery rates (EURs) among its peers in the region.

New conditions require new analysis
These new techniques that Whiting and Cabot are experimenting with are already finding their way to other drillers as well. Both Halcon and Kodiak have said recently they are looking to move to more plug and perf style wells in the Bakken that include higher levels of proppants and longer drilling lengths. As more and more companies start to use these techniques, we won't see them dropping well costs. But we should expect their well production to drastically increase.

So as investors who want to determine how these companies are doing, we need to change the way we are evaluating them. Instead of looking at a cost number and compare it to its peers in the region, we should look at the EUR per dollar spent on the well. This will give us a much better picture of the efficiency we can expect. Let's use a well example from Whiting to show this. Using its new drilling techniques, the company estimates that it will be able to get EURs in the 500,000-600,000-barrels-of-oil range per well versus 400,000 from its former wells in the Bakken. Today, the company is spending $7 million-$8.5 million per well. Let's say, for argument's sake, these new techniques were to cost an additional $500,000 per well. This is what it looks like for Whiting:

So even if these new methods were to cause a hefty jump in costs per well, the company would still have a better rate of return on those dollars spent.