When you think of generic drug manufacturers, you're probably thinking of major players such as Teva Pharmaceutical, Actavis, Mylan, and Novartis subsidiary Sandoz.

However, there is another up and comer that shouldn't be ignored -- Hospira (NYSE: HSP), a maker of specialty injectable drugs and medical devices. Hospira holds an impressive portfolio of biosimilars -- generic versions of top-selling biologic drugs -- which will help boost its top line. 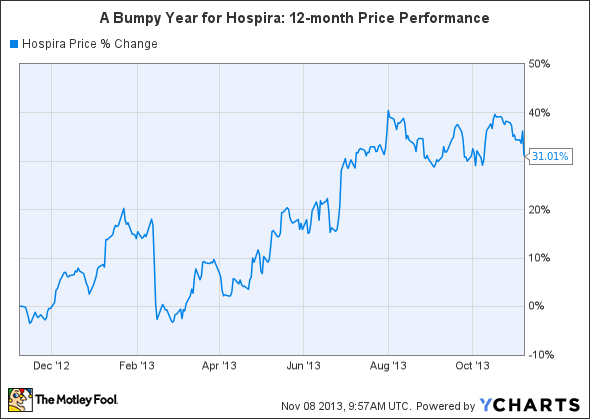 Let's take a closer look at how Hospira has fared in the past, and how newer products might unlock the company's true potential.

Hospira's revenue comes from three segments -- specialty injectable pharmaceuticals, medical management (medical devices and software), and other pharmaceuticals. 80% of its total revenue is generated in the America's, with the remainder split between the EMEA (Europe, Middle East, Africa) and APAC (Asia Pacific) regions.

Strength in specialty injectable pharmaceuticals
The good news is that the SIP segment, its largest business, posted top line growth -- primarily due to strong sales of Precedex, a sedative that is used in intensive care units. Precedex is different from many other sedatives in that it can sedate a patient without causing respiratory depression.

Sales of Precedex were strong in Japan and Korea, and were boosted in the U.S. by the introduction of new premix versions. During its conference call, Hospira noted that its conversion rate from the original to premix versions jumped from 20% to 40% sequentially.

Another top seller was the chemotherapy drug paclitaxel, which sold particularly well in China during the third quarter.

Weakness in medical equipment
Sales of its medical management devices and software, on the other hand, were disappointing. Hospira attributed the double-digit decline in medical devices to an FDA ban earlier this year which kept the company from importing several top medical devices, including its Symbiq infusion pumps, into the U.S. The FDA has questioned the quality of the products manufactured at Hospira's Costa Rica plant -- a problem the company is still working to resolve.

After the FDA ban, Hospira signed a deal with Q Core Medical to distribute the Sapphire system, a new infusion pump intended to replace its older GemStar line, which was banned by the FDA. Hospira intends to launch Sapphire in the U.S. in late 2013.

Although Baxter hasn't been hit by a regulatory setback on par with Hospira's, it received an FDA warning letter in regards to its SIGMA Spectrum Infusion Pump in April, which adversely affected U.S. sales during the quarter.

The road to the future is paved with biosimilars
Although Hospira's third-quarter earnings paint a mixed picture, you should consider the company's future in biosimilars when gauging the its true value.

Retacrit is a biosimilar version of Johnson & Johnson's (NYSE:JNJ) Procrit/Eprex, a treatment for anemia. Last quarter, J&J reported that global sales of Procrit/Eprex fell 4.2% year over year to $342 million, with a 13% drop in international markets -- possibly attributed to Retacrit's strength.

Nivestim is a biosimilar version of Amgen's (NASDAQ:AMGN) Neupogen, a treatment for neutropenia, or the lack of white blood cells. In 2012, Neupogen generated $1.2 billion in revenue for Amgen, accounting for 7% of its top line. Although global sales of Neuopgen remained flat year over year, sales in international markets fell 16% -- which could be due to rising sales of Hospira's Nivestim and Teva's generic Neupogen, which was approved last August.

Generic Remicade could become Hospira's crown jewel
However, one biosimilar product could become Hospira's crown jewel -- Inflectra, a generic version of the blockbuster drug Remicade from Johnson & Johnson and Merck (NYSE:MRK). Remicade, one of the world's top-selling drugs, is a biologic treatment for rheumatoid arthritis and other inflammatory conditions, which generated sales of $6.1 billion for J&J and $2.1 billion for Merck in fiscal 2012.

Inflectra, which was co-developed with South Korean company Celltrion, was approved by the European Commission in September -- casting a shadow over the future of Remicade, which is a key source of revenue for J&J and Merck. During a conference call, Hospira CEO F. Michael Ball stated that the company intends to launch Inflectra through distributors in Eastern Europe in late 2013 and early 2014, then move into the larger markets in 2015, as more of Remicade's patents expire.

Remicade generated approximately $2 billion in sales in Europe in 2012 -- which points to huge market potential for Hospira, which reported $4.1 billion in revenue last year.

The Foolish bottom line
Many investors are focused on Hospira's Costa Rican troubles, which are a dead weight on its top line. I agree -- it's tough to construct a bullish thesis for Hospira as long as the issue remains unresolved.

However, I believe you should pay close attention to the potential of Hospira's biosimilars, which will come at the expense of larger players like J&J, Merck, and Amgen. Soon, these products could seriously boost sales in the SIP segment, and unlock the company's true potential.