Sam Mattera
(TMFMattera)
Author Bio
Sam has a love of all things finance. He writes about tech stocks and consumer goods.
Stock market crashes may seem like random occurrences -- unfortunate yet unforeseeable events. While crashes are bound to happen, if investors hold on for the the long haul their portfolios should eventually bounce back. The Dow Jones Industrial Average (DJINDICES:^DJI) shed almost 8,000 points from 2007 to 2009, but those who had the patience to ride out the crash are ahead today.
But what if you could see the crashes coming in advance? What if you could step aside before it's too late?
Mark Spitznagel, president and CIO of Universa Investments -- a fund with about $6 billion in assets -- thinks it's possible. In his recent book, The Dao of Capital: Austrian Investing in a Distorted World, Spitznagel argues that crashes are entirely foreseeable events and that if investors understand the market forces at work, they can cash out before the crash and save themselves a lot of pain.
The one indicator to watch
Spitznagel is a big fan of "Tobin's q," a ratio that compares the market value of companies to their replacement cost. A low q suggests that it's cheaper to buy a company than it is to buy the company's assets; a high q indicates the exact opposite.
Historically, high q values have corresponded to market tops. Indeed, Tobin's q peaked in 1999, just before the bursting of the tech bubble. The opposite is also true: The early 1980s saw some of the lowest q values on record, and if investors had bought into the market back then, they would have enjoyed great returns through the 1980s and 1990s. 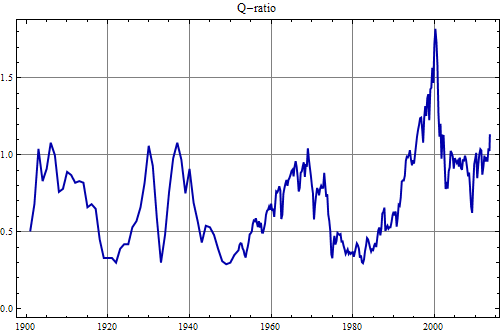 Spitznagel is a big believer in Austrian economics, a controversial school of thought that stands opposed to most conventional economic theory. (Ironically, James Tobin, the economist behind the q ratio, was a champion of Keynesian economics.) But Spitznagel told me recently that Tobin failed to understand the importance of his ratio. A high q ratio suggests stocks have become detached from the underlying economy.
"You'd think if there were a true elation about where the economy is going -- which the move in stocks seems to suggest -- then there'd also be this general investment in the rest of the economy," Spitznagel said. "But there's no such thing. To the contrary. Corporations are sitting on more cash than ever; they're not investing it."
Hoarding cash
That's certainly the case. Despite record-low interest rates, companies -- including Apple (NASDAQ:AAPL) -- have hoarded cash, leaving billions of dollars on their balance sheets instead of reinvesting it in their businesses. Some corporations have put their cash to work with dividends and share repurchase programs -- what activist investor Carl Icahn is pressuring Apple to do -- but as Spitznagel told me, this isn't leading to sustainable economic growth.
Doing what Icahn wants (borrowing against Apple's balance sheet to buy back stock) would likely drive Apple shares higher in the near term, but it wouldn't create growth. Paying shareholders may be great for Icahn, but Apple would serve the broader economy better by using that money to build factories or otherwise invest in its own business.
Is another crash coming?
What drives the q ratio? Spitznagel argues that the Federal Reserve is responsible. When the Fed maintains excessively loose monetary policy, the q ratio is driven higher as a credit-induced boom grips the market.
As one might expect in light of the Fed's recent policy decisions, the q ratio is again hovering near historic highs -- around 1.08, on par with where it was in 2007 -- prompting Spitznagel to call for a crash. He sees a 40% correction coming for the S&P 500 (SNPINDEX:^GSPC), and though he has no definitive timetable, he expects it sooner rather than later.

"There's all kinds of levers the Fed can pull," Spitznagel said. "And when they pull them, the market will go up. But at this point, it's pushing on a string. This is a bad economy, and the market is going to crash."

While doomsday predictions are a dime a dozen, Spitznagel may be worth paying attention to. He profited from corrections in 2000 and 2008, more than doubling his funds. In the meantime, however, he steadily loses money -- his hedge fund is said to be down about 2% this year. Nonetheless, he maintains that by buying stocks when the q ratio is near historic lows and then swapping them for Treasuries when the ratio is near its highs, investors can outperform the S&P 500.
A macro strategy for the long term
Of course, there's an obvious limitation to the strategy: It doesn't lend itself to stock picking or swing trading. In fact, if you had been following the q ratio for decades, you would have sold all your stocks in the mid-1990s and would still be sitting in Treasuries today.
Although the broader market has experienced waves of boom and bust, some companies have managed to create real value. A  company like Amazon.com, for example, is up more than 500% since 1999; even if shares were to get cut in half next year, it still would have been a great investment for a long-term stock-picker. If you had based your investment decisions strictly on Tobin's q, you'd be sitting in Treasuries, missing the boat on those incredible (though admittedly rare) opportunities.
Index investors may benefit the most from following Tobin's q, using it as a tool to identify periods of extreme exuberance or undervaluation. Of course, that's assuming they have the patience; few may be willing to wait for an Armageddon that might never come.
This article represents the opinion of the writer, who may disagree with the “official” recommendation position of a Motley Fool premium advisory service. We’re motley! Questioning an investing thesis -- even one of our own -- helps us all think critically about investing and make decisions that help us become smarter, happier, and richer.