Did you think the smartphone revolution was slowing down? Think again. According to the world's largest maker of telecommunications networks, Ericsson (NASDAQ:ERIC), smartphone traffic will increase by 10 times over the next five years as global smartphone subscriptions rise faster than previously thought, tripling to 5.6 billion units by 2019. They'll end up representing 60% of all cell phones in use, Ericsson said today. 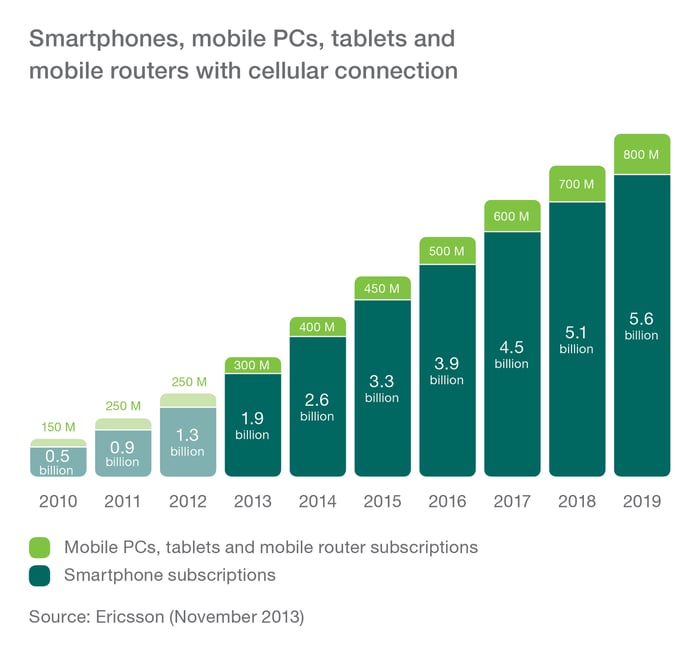 Since smartphones currently represent 55% of cell phones in existence, it's not a major shift on that front, the real eyebrow raiser will be in subscriptions, as they only account for 25% to 30% of total mobile subscriptions at the moment.

Total mobile subscriptions are predicted to reach 9.3 billion by 2019.

According to a Reuters report, the market researchers at Strategy Analytics said more than 250 million smartphones shipped in the third quarter, up 45% from the year-ago period, with Samsung manufacturing 35.2% of them and Apple another 13.4%.

With the proliferation of smartphones still in high gear, the amount of traffic they generate is also set to explode, growing by 10 times between 2013 and 2019, and reaching 10 exabytes -- that's 10 billion gigabytes. The largest component of the growth will be in video, which itself is growing at an annual 55% clip, according to Ericsson, and will come to represent more than half of all mobile data traffic. Social networking and web services will account for another 10% each in the amount of traffic generated in 2019, Ericsson estimates.

The telecom network maker also notes that almost two-thirds of the world's population will be covered by 4G/LTE networks with 90% covered by WCDMA/HSPA networks in a bid to support the smartphone user experience.

The company says this exponential growth will be "driven by uptake in China and other emerging markets as lower-priced smartphone models become available."