The company also noted that in this particular trial one patient death occurred due to acute pancreatitis. Enrollment of the study, which was temporarily suspended, has since resumed with monitoring of pancreatic enzymes, as well as an exclusion criterion for prior history of pancreatitis. 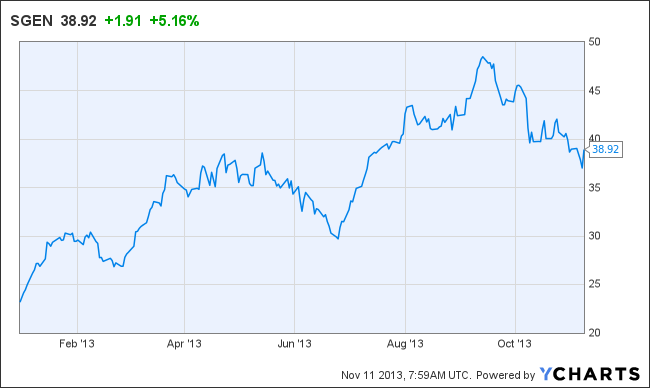 News drove shares lower, and the stock is currently down 20% from their peak for the year. I believe this is a nice opportunity for those interested in long-term value to check out Seattle Genetics, as long-term potential for this company looks bright.

Adcetris' stellar launch
Seattle Genetics launched Adcetris in the U.S. in August 2011, and the product had a stellar first year with North American revenue reaching $138 million in 2012, its first full year on the market.

Adcetris costs approximately $4,500 per vial, and three vials are used in each treatment cycle. Since Adcetris patients complete eight cycles of therapy on average, total therapy cost is approximately $108,000 per patient. Based on these figures, we can assume that there are approximately 1,300 patients being treated with Adcetris annually in the U.S., a 60% market penetration of the potential number of patients available for Adcetris' currently approved indication.

Partnerships and collaborations
Seattle Genetics collaborates with Takeda to develop and commercialize Adcetris outside of the U.S. and Canada. Adcetris was granted conditional approval in the European Union in 2012 for patients with relapsed Hodgkin lymphoma.

Seattle Genetics is also collaborating on 22 different antibody-drug conjugate therapeutics in various stages of testing with 12 pharmaceutical companies including nine with Roche, two with AbbVie (NYSE:ABBV), two with Agensys, and one with Pfizer (NYSE:PFE). To date, these collaborations have generated approximately $300 million for Seattle Genetics and have the potential to generate more than $3.5 billion in milestone payments plus royalties.

In June, Seattle Genetics entered into a collaboration with Bayer to create cancer drugs that home in on tumors and then deliver a toxic dose to their cells. The collaboration will generate upfront and option exercise fees of up to $20 million. Seattle Genetics is also eligible to receive up to approximately $500 million in potential milestone payments, as well as royalties on worldwide net sales of any resulting products under the multi-target collaboration.

Competition
There are currently no FDA-approved therapies for the treatment of relapsed Hodgkin lymphoma other than Adcetris. However, Celgene's (NASDAQ:CELG) Istodax and Spectrum Pharmaceuticals' (NASDAQ:SPPI) Folotyn are both approved for relapsed or refractory peripheral T-cell lymphoma. There are also multiple investigational agents that are currently being studied, including Pfizer's crizotinib and Millennium's alistertib, which, if successful, may compete with Adcetris in the future.

R&D pipeline
Adcetris is currently undergoing nine clinical trials -- four in phase 3, four in phase 2, and one in phase 1. Seattle Genetics also has six other antibody-drug conjugate therapeutics in early stages of testing, including the drug SGN-CD33A targeting CD33, a protein that is expressed on most acute myeloid leukemia (AML) cells. The company has also submitted SGN-LIV1A, its breast cancer drug candidate, for an investigational new drug application to the FDA, and a phase 1 trial is expected to begin before the end of the year.

Recent financials
Seattle Genetics recently ended the third quarter in a strong financial position with nearly $374 million in cash and investments, up from $338 million at the end of the second quarter. The increase reflects cash inflows from Adcetris sales, royalty revenues, and collaboration activities.

Adcetris sales were $106 million year-to-date and the product is on track to achieve more than $140 million for the year. Collaboration revenues were $84 million year-to-date, and its partner Takeda continues to obtain reimbursement approvals and to launch Adcetris throughout the world.

Foolish takeaway
Seattle Genetics has positioned itself strongly with its collaboration deals and with its own pipeline of drugs in various stages of testing and the company's antibody-drug conjugate technology program continues to grow.

Despite recent side effect data concerning Adcetris, the drug is currently the leader in its therapeutic niche with very little competition and, according to  management, is positioned to reach peak sales of $1 billion in the U.S. alone.

The whole U.S. biotech sector might be experiencing a bubble these days; however, Seattle is nicely positioned for long-term growth and the current breather offers a nice entry point for long-term biotech value investors.