Climate change is a hot-button topic for many in the U.S., with many still doubting both the science and whether human activity is part of the reason behind it. However, the scientific community at large is pretty well convinced that both of these things are indeed happening, and most international organizations and countries are accepting the reality. But even if you're not a believer in climate change, there's really only one thing that matters when it comes to understanding why solar companies like SunPower (NASDAQ:SPWR), First Solar (NASDAQ:FSLR), and GT Advanced Technologies (NASDAQ: GTAT) could be tremendous long-term investments: 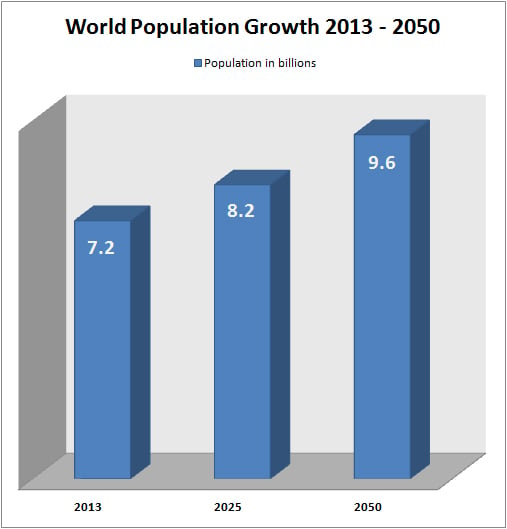 Let's take a closer look at how population growth -- and the demand for more cheap energy -- will fuel solar's growth over the next two decades. Renewable energy of all kinds will play a larger role in how the future is powered. While solar's piece of the energy pie -- even in 2035 -- is projected to be relatively small compared to the whole, it's more about the growth from current levels that matters. According to the IEA, solar only accounted for about 67 Gigawatts in 2011, which was less than a third of even wind. However, solar has grown at a nearly 50% annual rate of growth over the past five years, compared to 25% for wind. The key? Both are important, but solar has more room to run, especially for investors.

Best of breed technology
This is what SunPower is counting on to set it apart, with industry-leading efficiency levels. Its E20 series panels are rated at better than 20% energy conversion, as compared to closer to 15% for most competitors' panels. This technological advantage was cited in a recently awarded contract to construct an 86 Mwp solar plant in South Africa, in a project that is being largely driven by Total SA (NYSE:TOT), which owns 66% of SunPower. Philippe Boisseau, President, Marketing & Services and New Energies, said, "This project proves we can deliver, with our affiliate SunPower, the best technology at a competitive price" according to the press release.

Africa, along with China and India, is one of the biggest opportunities for solar. While having a foreign energy company in Total the majority owner of SunPower adds an additional level of oversight for investors (you'll want to know how Total's management performs,) so far its partnership with SunPower has been critical to the company's success.

Getting costs in line
First Solar claims to have been the first solar manufacturer to break the $1/watt barrier, but the company hasn't been as competitive in more recent times. However, the latest quarterly earnings point toward a big step forward in this regards. CEO Jim Hughes, from the Q3 earnings call:

We have had the largest quarterly decline in our cost per watt since 2007, falling $0.08 to $0.59 on average in Q3 and in line with our competitor's report cost per watt. Excluding freight, recycling and warranty charges, our core figure is now oil $0.50; $0.49 to be exact, the lowest in the industry. These results are an impressive validation at the in technology and cost roadmaps that we provided during our Analyst Day in April, and upon which we will continue to execute.

And while the $2 earnings per share the company reported was largely driven by the sale of one massive project in Canada, driving down manufacturing costs will bring more profit to the bottom line, even as the company can be more competitive in the market.

Stepping out of the sun
GT Advanced Technologies big sapphire deal with Apple has been well-documented, and mister market's 20% pop the day of the announcement. However, it's worth noting that the company still has to perform to earn the market's uptick; based on the earnings and press release, this uptick isn't going to happen in the next quarter, which could lead to a lot of continued volatility in the share price. The company's trailing 12-month revenue is $784 million, with the vast majority of sales from polysilicon and photovoltaic segments of the business, and with sapphire accounting for less than 11% of sales so far in 2013. Guidance for 2014 is for revenue of $600 to $800 million, with 80% of sales to be sapphire. This is a massive shift in business for the company.

Final thoughts
Population growth -- specifically the expansion of developing nations and the growth of the middle class in these nations -- will only put further pressure on energy companies to source cheap, dependable energy sources, and solar will see strong growth as a result for decades to come. First Solar and SunPower are well-positioned market leaders, and worth taking a hard look at; SunPower's partnership with Total, so far, looks to be advantageous to both companies; however an investment in SunPower means trust that Total's management will both continue to run Total well, and also not interfere with SunPower.

GT Advanced Technology is a different story, though still a play on the continued growth of the global middle class. If the company can leverage the Apple deal while also adding other partners, then this move could be a real boon.