Netflix (NASDAQ:NFLX) just introduced a unified user interface for a wide range of viewing experiences. The redesigned interface is the payoff for nearly two years of design work, and will make it easier to move from one device to another. Over the next few weeks, you'll receive the exact same Netflix user experience whether you're watching via a Microsoft (NASDAQ:MSFT) Xbox 360, a Sony (NYSE:SNE) PlayStation 3 or 4, a low-cost Roku box, or a variety of smart TV sets and Blu-ray players.

This is a step toward the tightly unified design philosophy of Apple, where knowing your way around an iPhone also makes you feel at home on an iPad or the iPod Touch. By contrast, the Android mobile platform often catches flak for being fragmented. A Samsung-made Android tablet probably won't look and feel the same as an LG one; tablets and smartphones get wildly different user interfaces; and even the same handset can feel different when the network operator adds its own tweaks.

Apple doesn't play those games, and now Netflix is moving in the same direction. From the digital media veteran's perspective, it couldn't really matter what hardware you're using to watch your movies or TV shows. They should all give you that smooth Netflix feel and nothing else.

But you'll notice a few important and popular boxes missing from the lineup above. If Sony supports two generations of PlayStations, where's the Xbox One? And what happened to Nintendo (OTC:NTDOY)?

Netfix isn't just leaving these platforms high and dry for no reason. There are technical reasons for all of these omissions.

So there you have it. The original Wii simply can't handle the new Netflix design, while the company just doesn't want to waste the unique benefits of the Wii U and Xbox One consoles.

So it's not a perfect across-the-board unification play, but then Apple didn't roll out the latest version of its iOS platform to older gear like the iPhone 3GS and fourth-generation iPod Touch. Obsolescence happens, folks. On the other end of the spectrum, Netflix doesn't design its own hardware but aims to work with anything you might connect to your big-screen TV. In that situation, it's simply good business to support advanced features from forward-thinking hardware providers.

Netflix has quadrupled its R&D budget over the last five years to support tripling revenues and pave the road toward further gains. And Netflix shareholders aren't exactly complaining about the results. 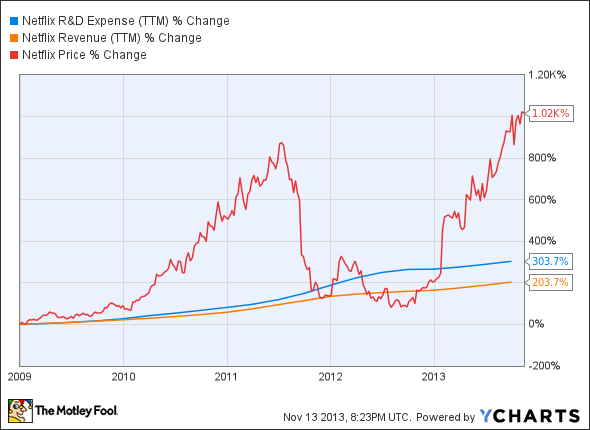