Novartis (NYSE:NVS) today announced positive clinical trial results for its vaccine for the H7N9 avian flu, marking the first major step made by a large pharmaceutical company in treating the virus. There have been 135 confirmed H7N9 cases of and 45 deaths since the virus was identified in March.

The Centers for Disease Control and Prevention currently recommends two drugs for the treatment of H7N9 -- Tamiflu, developed by Gilead Sciences (NASDAQ:GILD) and marketed by Roche (OTC:RHHBY), and Relenza, created by Biota Pharmaceuticals (NASDAQ: BOTA) and marketed by GlaxoSmithKline (NYSE:GSK).

Orally administered Tamiflu is widely recommended as the first treatment. Relenza, which is inhaled or administered intravenously, is recommended for patients who have trouble tolerating oral Tamiflu due to gastrointestinal problems. However, the overall efficacy of Tamiflu and Relenza in the treatment of H7N9 is still unknown, since both treatments are designed to treat a wide variety of flu strains, rather than a single one.

Novartis makes impressive progress
According to Novartis' interim report, the H7N9 vaccine protected 85% of tested patients who received two doses of the vaccine combined with MF59, Novartis' own immunologic adjuvant. Adjuvants are added to flu vaccines to stimulate the body's immune system response and help the vaccine take effect. The difference that MF59 made was impressive -- without the adjuvant, Novartis' H7N9 vaccine only protected 6% of patients after two doses.

Novartis' H7N9 vaccine was manufactured through full-scale cell-culture technology, which uses a mammalian cell line -- a much faster production method than the traditional method of growing flu virus strains in chicken eggs.

After sharing the initial vaccine trial results with the Chinese Centers for Disease Control and Prevention, Novartis started clinical trials on the vaccine in August and began large-scale production in American and German production facilities in October.

Both Sanofi and Novartis have been working with the National Institutes of Health in the United States to develop an effective H7N9 vaccine.

Novartis' vaccines unit notably posted the strongest performance in the second quarter of the year, due to robust demand for seasonal influenza treatments and bulk shipments of pediatric vaccines.

However, Novartis' vaccines business, which includes its diagnostic tools and services, is considerably smaller than its rivals. By comparison, GlaxoSmithKline reported $1.6 billion in revenue from its vaccines unit, which accounted for 15% of its top line.

Yet Novartis' recent progress with the H7N9 vaccine and the proven efficacy of the MF59 adjuvant could substantially increase the weight of the vaccines segment. Moreover, Novartis recently slimmed down the unit, divesting the blood transfusion diagnostics part of the business to Grifols for $1.7 billion.

In addition to these recent developments, Novartis has also considered selling the entire vaccines unit along with the veterinary division of its consumer health business, according to a recent Bloomberg report.

The Foolish takeaway
The positive news regarding Novartis' H7N9 vaccine probably won't be enough of a catalyst to cause shares to rally. However, Novartis has already performed fairly well over the past 12 months and stayed ahead of the overall market. 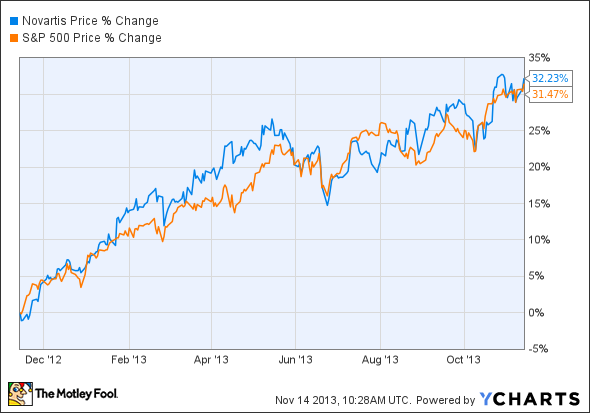 Investors should now pay closer attention to the company's often-overlooked vaccines unit -- will it grow bigger to rival larger competitors like GSK and Roche, get broken up and divested further, or sold altogether to generate cash that can be invested in higher-growth businesses, such as generics and consumer health?