It's been almost a month since Goldman Sachs (NYSE:GS) issued its most recent quarterly report, so let's take a look to see how the market has digested the information and what it means for investors. The numbers were mixed, and the initial reaction by the market was negative, but investors seem to have shrugged off the bad and embraced the good.

So, why is Goldman still so appealing after a so-so quarter? How does it stack up to peers such as Morgan Stanley (NYSE:MS), or to larger, more diversified financial institutions such as JPMorgan Chase (NYSE:JPM)?

A little deeper into the report...
For the third quarter, Goldman Sachs reported earnings of $2.88 per share, which came in far better than the analysts' consensus of $2.46. However, revenue missed by a considerable amount, coming in at $6.72 billion versus an expectation of $7.35 billion.

CEO Lloyd Blankfein attributed poor revenue to what he called "slow client activity." In other words, the U.S. budget issues and other issues created uncertainty, so clients kept to the sidelines, resulting in lower commissions, fees, etc. for Goldman. Not to mention the summer season is a slow time in general for investment activity.

One of the more interesting effects of the slower activity is how the company's variable employee compensation structure reduced expenses. While revenue was 20% less than it was for the same quarter last year, total compensation fell by 35%, saving the company $1.29 billion, even more than the amount of the revenue miss. In other words, Goldman paid so much less to its employees that its profits were greater than expected on less revenue, which singlehandedly explains the quarter's results.

Shares are cheap: both historically and relative to peers
As of the quarterly report, Goldman's tangible book value was around $144 per share, and its current price values the company at just 1.14 times TBV. While this is not quite as cheap as the discount to tangible book seen in a company like Citigroup, it's still remarkably cheap for Goldman and the sector as a whole. Here is Goldman's average share price to TBV ratio over the past decade: 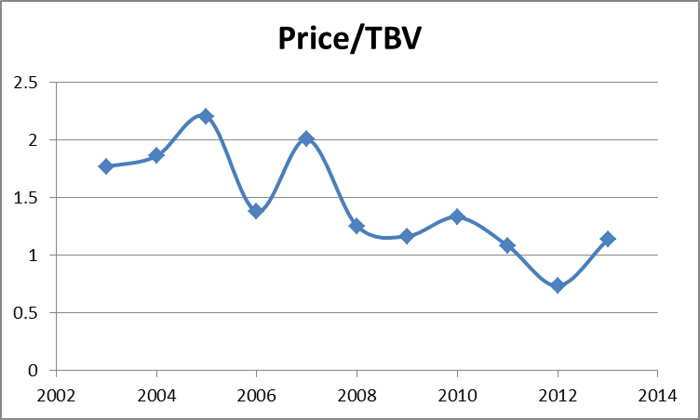 So, while not the cheapest it has ever been, Goldman is trading at a very low valuation relative to its historical level. Now let's see how this compares to its peers.

The closest competitor to Goldman, both in terms of size and business model, is Morgan Stanley, which trades at the exact same price/TBV as Goldman right now. So, it seems the investment banking sector is trading at a discount relative to its historical levels. While ratios above 2 are unlikely in the near future, I feel a price/TBV of 1.5 is completely reasonable for these companies, especially if the economy and returns both continue to improve.

As far as other financial institutions go, JPMorgan Chase is arguably the best blend of investment-oriented banking with traditional banking activities. However, the company trades for a much higher valuation of 1.40 times tangible book, which is much closer to its historical average.

In fact, JPMorgan actually has a higher share price today than it did at any point before the financial crisis, an extreme rarity in the financial sector. While I believe JPMorgan is a very well-run and healthy financial institution, its price appears to no longer be in the basement.

Looking ahead
While the investment banking sector seems to be on sale, Goldman is the one I would be willing to bet on over the long run. It has a reputation for employing the best talent on Wall Street, and the company's track record backs it up. Even in the worst years of the financial crisis, Goldman never had a losing year, a claim that Morgan Stanley cannot make. To borrow a quote from Warren Buffett, an investment in Goldman is a "bet on brains."

Goldman Sachs: The Smartest Guys on the Street Are on Sale @themotleyfool #stocks $GS $MS $JPM Next Article
Current