It's a fun game to predict where gas prices will go. Why? Because there are absolutely no consequence if you are wrong. The renaissance in oil and gas production has left price prognosticators with the easy excuse of "well, I didn't expect ___ to develop so quickly". So rather than stand on a soap box and tell you why gas prices will go below $3, let's try a different approach. For gasoline prices to actually go down, there are certain drivers in the market that will make it possible. To determine how it is possible to get to $3.00 gasoline, let's answer 4 questions that should give us a better understanding of the situation. 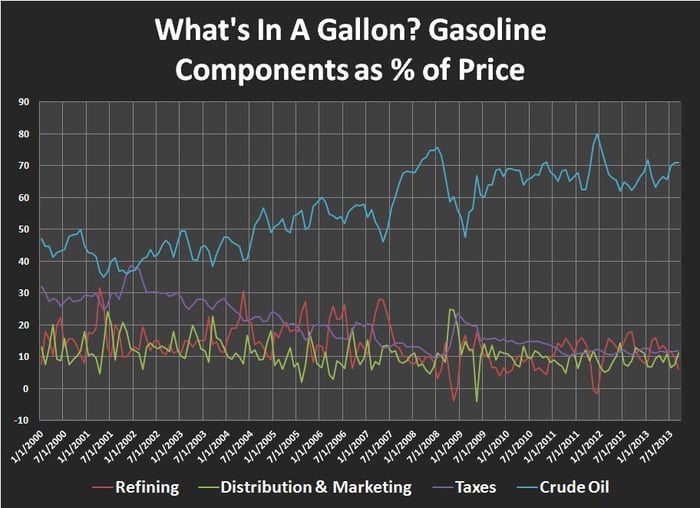 Over the past 13 years, there have 7 months where the average price of gasoline was $3.00 (plus or minus $0.10). During those times, the average breakdown of gas prices looked like the graphic on the right. So bringing this all together, it would mean that the average price of a barrel of crude would need to be at about $86 per barrel for $3.00 gasoline, an 18% drop from the average price refiners are paying for crude today.

2) How does oil get to that level?
There are so many things that can cause oil and gas prices to fluctuate. Sometimes, those fluctuations have absolutely nothing to do with supply and demand. Overall, though, there is one major trend that we can assume. OPEC member nations have made a stated goal that they want foreign oil prices to remain at $100 per barrel, and they will be willing to cut overall production to maintain that price range. Is is possible? That is a question way above my pay grade, but according to Michael Levi at the Council on Foreign Relations it's likely over the next couple of years.

So let's assume that foreign oil prices will stay at $100, that means the overall price cuts would have to come from our domestic production. Based on the type of crude we produce here in the US and the crude quality that US refiners are built to process, our capacity to refine domestic oil maxes out at 8.2 million barrels per day. This means our refiners can run at just over 50% domestic crude. If our refining capacity is running half $100 import crude and half domestic crude, then domestic prices need to be at $72 per barrel, which is 24% lower than today's domestic prices.

3) Can the difference between domestic and foreign crudes get that big?
It hasn't reached that big of a difference, but the possibility for domestic crude oil to be well below foreign prices is very possible when there are bottlenecks in the system. Back in July of last year, domestic crude traded at a $22 discount to foreign prices, and Canadian oil sands crude has been as much as $40 less than American crude prices. These big differences in prices happened because there wasn't adequate takeaway capacity.

While the US's ability to move oil via pipe and rail has been able to remove most of the clogs between the well and the refiner, there is one possible way that we could see another major bottleneck that could cause domestic oil prices to drop. There is essentially a ban on US crude oil exports (with some exceptions for Canada). So if US domestic production of light crude were to exceed our refiners ability to process that crude type, then the system could get clogged and prices could drop.

4) Could producers still make money at that low of a price?
That question depends on where you are drilling for oil. Based on Bank of America/Merrill Lynch's 2013 Energy Outlook, there are some oil producing regions in the US that could sustain $76 a barrel oil, and others that can't. 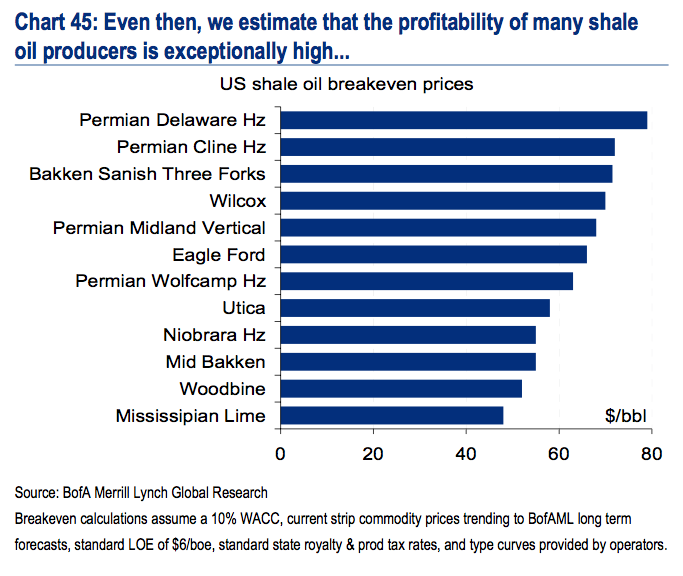 Combined, the Permian, Eagle Ford and Bakken shale plays represent almost 3.4 million barrels per day of production, and executives at ambitious drilling companies like Contiental Resources (NYSE:CLR), and EOG Resources (NYSE:EOG) predict that these three shale plays could reach as much as 6 million barrels per day combined. Unfortunately, these regions do have some of the higher break-even costs, and that would put a lot of strain on production. While many companies would be able to produce at a break-even level if we were to see prices go as low as $74 per barrel, it would severely hamper the overall growth of shale drilling across the entire country. Many of the younger, faster growing companies like Kodiak Oil & Gas (NYSE: KOG) and Halcon Resources (NYSE:HK), which have both taken on sizable debt positions to find huge expansion plans, could find them behind the eight ball in terms of financial stability if this situation were to play out.

What a Fool Believes
Could this scenario happen? Potentially. The inability of the US to export crude outside of Canada could be a major price changing event that could not only result in you or I getting cheaper gasoline, but also putting the financial future of many emerging energy companies at risk. Is this scenario definitely going to happen? I don't have the insider political knowledge to know whether the ban on exports will be lifted, so I can't say with any certainty that it will happen or not. If gas were to make its way to $3 a gallon, though, this is probably the most likely way it would happen.

What Would it Take to Lower Gas Prices? @themotleyfool #stocks $CLR $EOG $HK Next Article
Current