Continental's new mega-pads will put a complete end to the practice of flaring natural gas from its new Bakken wells.

The Bakken formation has been one of the success stories so far in the American shale revolution. This part of the country has gone from a very minor player in the U.S. energy landscape to a major production center that averages 1 million barrels per day. Despite the great success there, one issue has perplexed Bakken drillers for quite some time: how to prevent gas flaring in an economical way. It appears, though, that Continental Resources (CLR 2.12%) may have just found the best solution. Let's see how Continental has changed its drilling tactics to prevent flaring and how it could change the Bakken.

The birth of the mega-pad

The Bakken formation is first and foremost an oil-producing region. Wells from Continental and other Bakken drillers have so far been yielding a mix of 85% oil or greater from each well. Since these wells produce so little natural gas, it hasn't been economical to lay pipeline to take that natural gas away from the wellhead, so most companies had been flaring off that gas. However, there are so many wells in the region now that flaring is becoming a major concern not just for the ecological impact, but also for the loss of potential revenue. In fact, gas flaring is so prevalent in the region that it can be seen from space.

In response to this, the top drillers in the space have made pledges to cut flaring. Hess (HES 2.49%) has pledged to reduce it by 50%, and both Continental and Whiting Petroleum (WLL) have said they are shooting for zero flaring. The most effective way to do this would be, of course, to install natural gas pipelines to each pad, but, again, the amount of gas coming from a well or two makes it a very uneconomical decision. If you could install a gathering pipe for several wells, then you have a chance at making it happen.

This is exactly what Continental plans to do.

Another reason the Bakken is a unique formation is that it is what the industry calls a stacked play, meaning there are several oil-yielding formations stacked on top of each other. The lower sections, known as the Three Forks, have been left mostly untouched by most drilling operations aside from some test wells, but drillers have de-risked this formation and are now looking to incorporate it into the normal drilling program. With four layers of oil plays on top of each other, Continental is looking to drill all of these regions from a single pad. At a recent test, the company was able to generate returns on a 14 well pad, and the company plans to revisit some of its older producing regions to drill as many as 30 well pads. 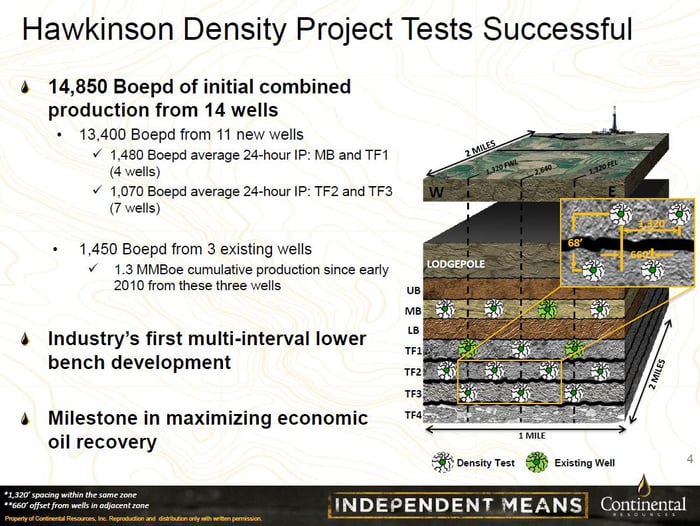 There are lots of advantages to these megapads. There is less down time between wells because so many wells are being drilled at a single location, which in turn drives down overall well costs. More importantly, though, it makes installing natural gas pipeline much more economical because there are so many producing wells in a single spot. On the most recent conference call, Continental's management said it plans to have an oil and gas pipeline laid to the site of each of its mega-pad projects before production begins, which will remove the need to flare gas. In the words of Chief Operating Officer Rick Bott, the company is "maximizing the value of every molecule that came out of there."

Other companies catching on
At more than 30 wells per pad, Continental has by far the most ambitious plans to build mega-pads, but other players are getting in on the action as well. Both Hess and Whiting have plans to build 12 and 17 well pads over the next 12 months, respectively. Also, some of the smaller players like Kodiak Oil & Gas (NYSE: KOG) expect to start planing 12 well pads. As these companies build out larger pads, it will enable them to put both oil and natural gas gathering pipe to each well, which will in turn reduce the total amount of gas flaring that occurs in this region.

One key element required for this to happen, though, is that the drilling location has to be a stacked play. So far, only Continental has been able to de-risk three layers of the Three Forks formation, and it is currently in the process of testing the fourth layer. To date, Whiting and Kodiak have yet to be as aggressive in pursuing the Three Forks formation. But Kodiak management stated it was encouraged by Continental's results in the lower layers of the Three Forks, and it was planning on pursuing a drilling program in 2014 to test these layers on its acreage close to where Continental has had success.

What a Fool believes
Of all the ways that have been considered to reduce gas flaring at the wellhead in the Bakken, companies moving to mega-pads with dedicated gas lines was probably the best way for all parties involved. It is, in all likelihood, the only method that will get the industry to the goal of zero flaring, but it does so in a way that increases a company's return on the well. It could also pressure other oil and gas drillers to do it as well, which could potentially prevent strict governmental regulations that many have called for. Put all these things together, and it adds to the already-compelling case that Bakken producers have presented over the past couple years.

Fool contributor Tyler Crowe has no position in any stocks mentioned. You can follow him at Fool.com under the handle TMFDirtyBird, on Google +, or on Twitter @TylerCroweFool.