If history is a useful guide, the housing recovery should lead into a pickup in commercial construction. With this in mind, well-known companies like building materials specialist CRH (NYSE:CRH) or water heater manufacturer AO Smith (NYSE:AOS) should be obvious beneficiaries.

Why commercial construction will be strong in 2014

This chart compares U.S. new housing starts to how many months' supply of new houses the U.S. has. The lines should mirror each other, because if the housing market is seeing strengthening demand, then the months supply of housing available (blue line) should be falling. Consequently, home builders should be induced to build new housing (orange line) so that line should be going up. With around five months supply at present, history suggests that housing starts should be a lot higher going forward. 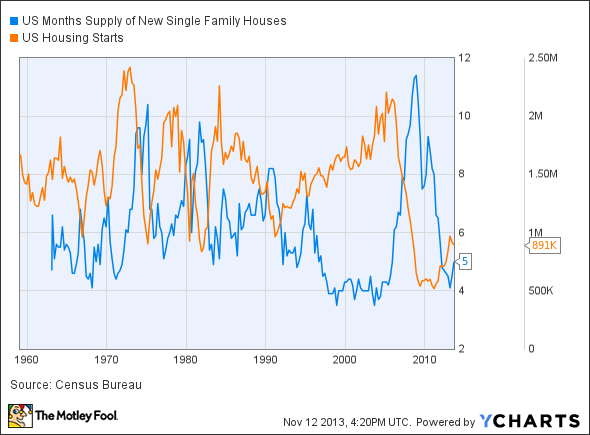 And while residential housing is recovering, commercial construction appears to be finally kicking in. For example, here is the Architectural Billings Index, or ABI, from the American Institute of Architects. It's the most closely followed construction index. Fortunately, its indicating that commercial activity has finally picked up after a weather-affected spring. 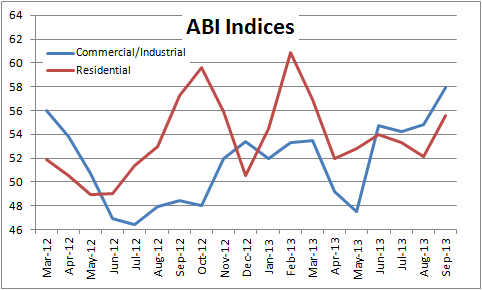 The following chart represents the net percentage of domestic banks that are reporting increased demand for loans. 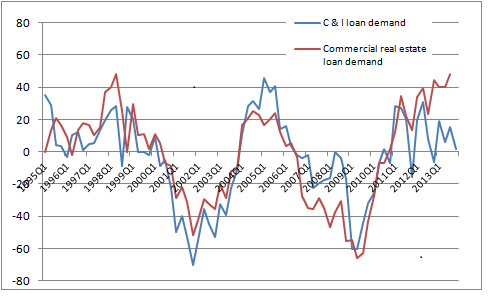 Note that commercial real estate demand has been strong, and outweighed Commercial and Industrial, or C & I, loans this year. This is unusual, and it could be a negative sign. But it could also owe to the strong state of U.S. corporate balance sheets, plus some reticence to invest thanks to political uncertainties.

Which stocks to look at, and what they are saying
CRH is one of the world's leading building-materials companies, and its recent results perfectly matched the ABI data above. Its first-half U.S. sales were down 1%, mainly due to poor construction weather, but it recorded a 4% like-for-like increase in the third quarter, and it's expecting "a continuation of an improving trend in the U.S.". In an added plus,  it even discussed some stabilization in Europe.

While CRH is focused on building frameworks, Armstrong World Industries (NYSE:AWI) is a leading flooring and ceiling company. In its third quarter, Armstrong saw its wood flooring rise 20.9% on the back of increased new residential construction. Meanwhile, its ceilings business (which is more affected by commercial office construction and represented 46% of sales in the quarter) saw sales up only 2.9%. If the commercial market improves next year then it's reasonable to expect better conditions for Armstrong.

AO Smith's water heating solutions are seeing strong demand. Its sales were up 16% in the third quarter, causing it to raise its full-year guidance for a third time this year. Moreover, its commercial unit sales surprised on the upside. From its recent conference call:

we've continually raised our estimates on commercial, and we just have much more difficulty kind of estimating that. I think last quarter, we set 154,000 units compared to last year's 147,000. And now, because of a very strong third quarter in commercial, we're going back to the drawing board and we've raised it to 157,000 units.

Heating, ventilation and air conditioning, or HVAC, is another vital component of any commercial building, and Foolish investors might be interested to look at stocks like Lennox International (NYSE:LII) or Regal Beloit. Lennox recently reported 13% constant currency growth in its residential business, and 8% in its commercial. Moreover, on its conference call, its management spoke of an "acceleration in in our commercial business in the third quarter".

Lighting is another area that Foolish investors should look toward. Stocks like LED play Cree or North America's leading lighting company, Acuity Brands (NYSE:AYI)  look set to benefit from the secular move toward LED lighting, as well as a pickup in commercial building. Acuity has been doing very well this year; largely from the residential market. But its true strength is in the commercial and industrial sector. Analysts already have it on nearly 10% revenue growth to Aug. 2014, but those estimates could easily be taken higher if my thesis right.

The bottom line
In conclusion, anecdotal evidence from companies exposed to the sector as well as industry data are suggesting that commercial construction is likely to improve in 2014. Of the stocks discussed above, Armstrong World Industries looks the best value. 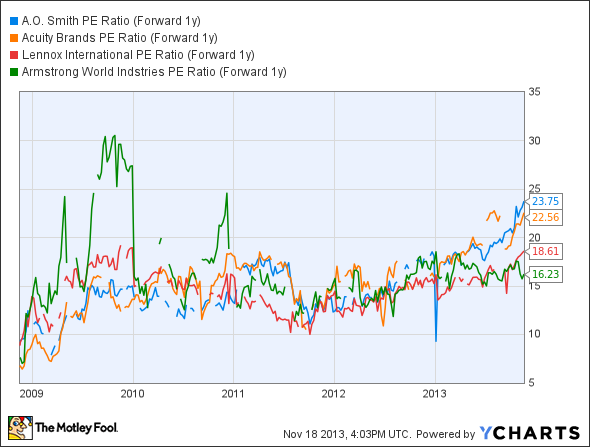 Its also the stock with the strongest gearing toward the commercial construction sector. Its wood flooring margins will suffer with if lumber costs go up, so keep an eye on that. However, should end demand pick up as expected -especially with its commercial ceilings- then the stock has good upside in 2014.

Other growth stock ideas from The Motley Fool