In a bid to keep EPS growing, Dillard's (NYSE:DDS) has aggressively bought back its stock over the last few years. Since 2007, it has shrunk its share count from nearly 80 million to just 45.2 million as of last quarter. These buybacks have magnified Dillard's rebounding earnings since the Great Recession. The results have been fantastic for shareholders. 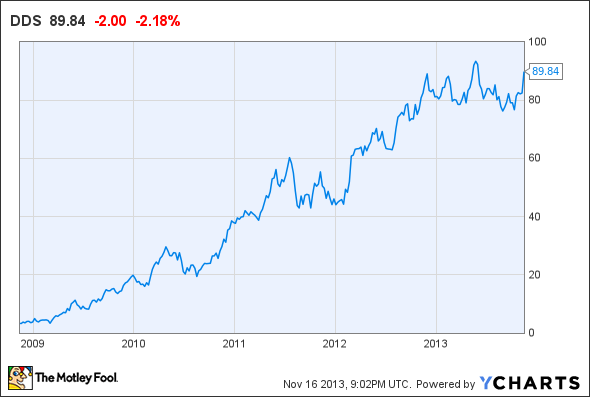 However, Dillard's is becoming a share-buyback junkie. Having been so successful with share repurchases in the past, the company seems unable to take its foot off the gas pedal. For years, Dillard's has cut capital spending to the bone in order to buy back more stock. Now, it's also tapping its revolving credit line to do so -- despite deteriorating business fundamentals. This is a dangerous strategy that could easily backfire.

Sales growth slows
During 2012, Dillard's was able to generate strong earnings growth organically -- by growing comparable-store sales by 4% for the full year while boosting gross margin and keeping expenses in line.

However, Dillard's sales gains last year may have had more to do with J.C. Penney's (OTC:JCPN.Q) terrible performance than the things Dillard's did right. There is significant overlap between the two chains' store bases, meaning that Dillard's was well positioned to capture a portion of the billions of dollars in sales lost by J.C. Penney.

Regardless of the explanation, sales growth has come to a screeching halt this year. Year to date, revenue is up fractionally, and comparable-store sales have increased by just 1% each quarter. Moreover, weak sales growth is starting to have a ripple effect on margins.

In the retail industry, it's almost never a good thing for inventory to rise much faster than sales; the typical result is big clearance markdowns that hurt gross margin. (This has been a key factor exacerbating J.C. Penney's big losses recently.) Sure enough, in the third quarter, gross margin broke out of its long uptrend, falling 40 basis points year over year.

Dillard's decision to "honor Thanksgiving" adds to the company's inventory risk. While every other mid-price department store chain is opening at 8 p.m. on Thanksgiving -- including Macy's, Kohl's, and J.C. Penney -- Dillard's will open for Black Friday at 8 a.m.

I admire management's courage, but there is a big risk that many shoppers will go out on Thursday night anyway, and Dillard's will just miss out on sales. It would be especially tough to recover from a weak Black Friday this year, due to the compressed holiday shopping season.

Risky business
The fundamentals of Dillard's business are thus shaky at best, compared to the recent past. In this context, it is particularly disturbing that management decided to buy back $187 million of stock last quarter without having the cash on hand to do so. The company borrowed $170 million on its credit line, which it intends to repay after the holiday season.

Dillard's generated about $300 million in operating cash flow in the fourth quarter last year. So even if sales come in below target yet again this quarter, Dillard's should still be able to generate enough cash to pay back the loan. However, not only would Dillard's take an immediate earnings hit (if sales disappoint), but the share buyback machine would have to slow down because the company's cash flow will be soaked up by the loan repayment.

Higher capital spending is also likely to constrain share buybacks next year. One reason Dillard's has generated so much cash recently is that it has not opened a new store since 2010. However, the company has three new stores planned for next fall, and the necessary capital spending will lead to lower free cash flow.

Foolish bottom line
Dillard's has had a great run over the last five years, but its luck appears to be running out. Sales growth is tapering off, and inventories are uncomfortably high entering the holiday season. Meanwhile, the company is pouring ever more money into share buybacks to keep EPS growing rapidly, even buying back shares on short-term credit. Unless sales growth accelerates during the holiday shopping season, Dillard's shareholders could be in for a lot of pain in the next year.