The eye-popping booms of the biotech industry attract many investors, while the demoralizing busts scare plenty more away. It can be a daunting task to identify a biotech company with the potential to successfully commercialize a revolutionary treatment and return incredible growth to your portfolio. Rather than roll the dice on a company's development value and prospects, however, you could simply identify formidable competitive advantages and long-term trends propelling companies into the future. Let's take a brief look at why Amgen (NASDAQ:AMGN), Ligand Pharmaceuticals (NASDAQ:LGND), Protalix (NYSEMKT:PLX), and Repligen (NASDAQ:RGEN) make up the simplest biotech growth portfolio ever. 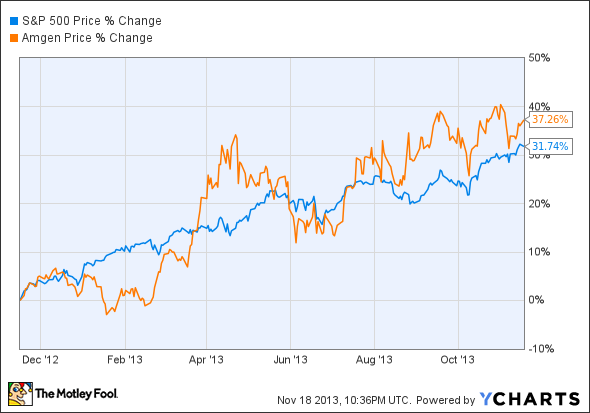 The product portfolio of this biotech pioneer receives a lot of criticism from Wall Street analysts, who claim growth will be impeded by generic competition on the horizon. A market cap of $90 billion also tends to scare growth investors away, but I think they'll be missing out on a great long-term opportunity. The recent acquisition of Onyx gives Amgen the promising multiple myeloma drug Kyprolis, which could reach peak annual sales of more than $2 billion. Meanwhile, a focus on developing novel immunotherapies, such as T-VEC for late-stage melanoma, will create enormous long-term value for investors. And why stop at novel therapies? Management seeks to generate several billion dollars in sales each year by marketing generic biologic drugs, or biosimilars, by the end of the decade.

While time is ticking away for some important blockbuster drugs, Amgen has one of the most robust pipelines for novel and biosimilar drugs in the industry, an enormous and growing biomanufacturing base, and an incredible focus on creating innovative production processes, and it wields several of the most promising new therapies. It's also the only true biotech company that pays a dividend, albeit a small one. Simply put, Amgen offers biotech investors a steady growth opportunity for the long haul. 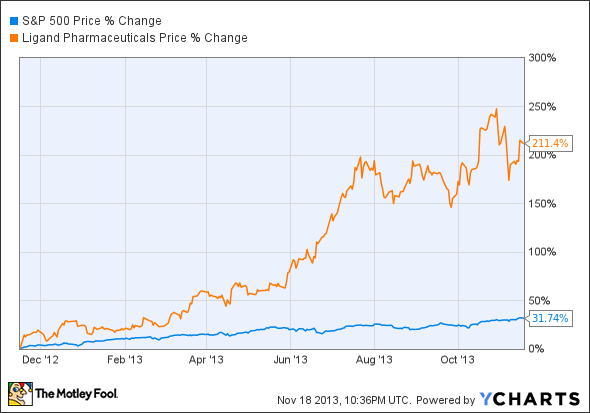 I recently highlighted the attractiveness of Ligand's business model for investors looking to own a biotech company that were wary of the risks of clinical development. The company acquires assets (molecular compounds and development platforms), licenses them to large pharmaceutical companies for development, and collects milestone payments and royalties along the way. That saves a ton of expenses that would otherwise go to research and development and overhead.

Ligand still faces developmental risks when compounds it licenses fail in clinical trials. However, its partners are the ones on the hook for the tens or hundreds of millions of dollars associated with development. The company loses out only on potential royalties. There is some spectacular growth potential for Ligand, with more than 80 compounds in its portfolio and 90% of those in clinical development, although I think it's a bit overvalued at its current valuation of $1 billion. Of course, I said that in my last article, and shares have responded by increasing 22% in just two months. 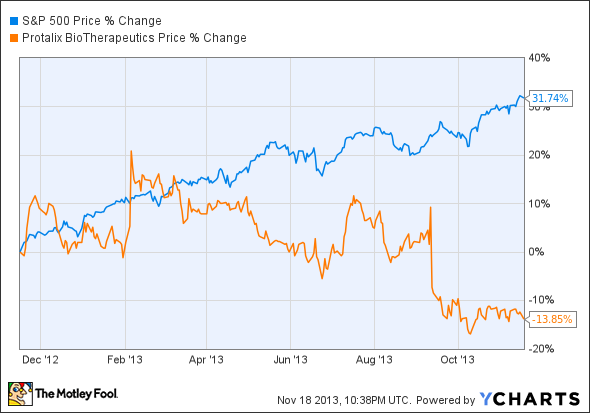 At first glance you may not think Protalix deserves to be called a growth company. Its only approved product -- enzyme replacement therapy, or ERT, Elelyso -- was the third to market. Sales won't blow anyone away, either. But the real value lies in the novelty of Procellex, a plant cell-based manufacturing platform, that can produce a wide range of biologic drugs much cheaper than standard mammalian cell lines.

Protalix is developing novel biologics for autoimmune diseases, bioterrorism antidotes, and oral ERTs, as well as several biosimilars. While the oral ERT PRX-112 could revolutionize treatment options for Gaucher disease, I still think the pipeline pales in comparison to the general opportunity Procellex presents in biomanufacturing. The platform alone should help attract potential partners for developing current and future molecules or serve as a beacon for companies looking to add a competitive edge in manufacturing. 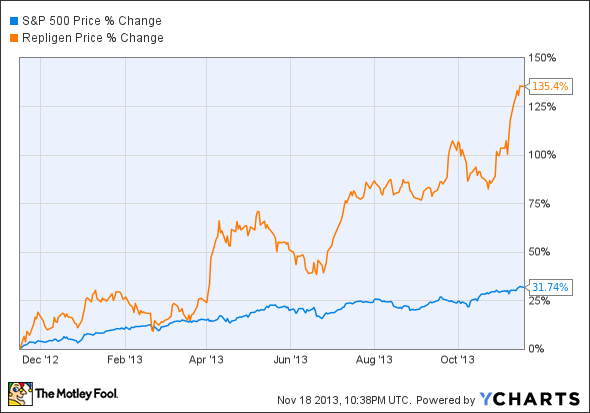 Ligand can tap into the growth of the biotech industry while skirting developmental risks, but Repligen can do the same while skirting both developmental and regulatory risks. That's because the bioprocessing company doesn't develop therapeutics; rather, it's focused on providing consumable products to biotech companies manufacturing drugs. Piggybacking on the success and growth of the biotech industry will allow the company to grow product sales by 10% to 15% annually while achieving 55% gross margin.

Repligen offers products that increase the productivity of microorganisms used to create monoclonal antibodies via fermentation, which increases the amount of drug produced. The company is also the world's largest manufacturer of an important product used in the purification of biologic drugs and has long-term supply deals in place with GE Healthcare and Merck Millipore. In addition, Repligen offers disposable chromatography columns (the vessels in which purification is conducted).

Considering that sales of monoclonal antibodies have grown from $41 billion in 2009 to $62 billion last year and that more than 350 such compounds are in development today, it's pretty clear that Repligen is poised for growth for years to come.

Foolish bottom line
Investing in biotech doesn't have to be difficult -- it's only difficult because investors make it complicated. Simplify the research process by finding long-term trends and value creators, and then find the companies exploiting them. You can forget about waking up anytime soon to an overnight multibagger with any of these four companies, but you can rest assured that they'll provide steady growth and have a better chance to avoid disastrous blow-ups. It's the simplest biotech growth portfolio ever -- until I find more companies that fit the criterion of simplicity.