Please ensure Javascript is enabled for purposes of website accessibility
Log In Help Join The Motley Fool
Free Article Join Over 1 Million Premium Members And Get More In-Depth Stock Guidance and Research
By Maxx Chatsko - Sep 22, 2013 at 10:00AM

Does disruptive potential trump poor finances for this developmental-stage company?

One of the best things about being a biotech investor, in my mind, is hunt for companies that are flying under the radar. Protalix Biotherapeutics (PLX -0.41%) certainly excels in the "disruptive potential" category and sports a sub-$500 million market cap. The developmental-stage company has had a volatile trip through the market and is far from owning an enviable financial position. 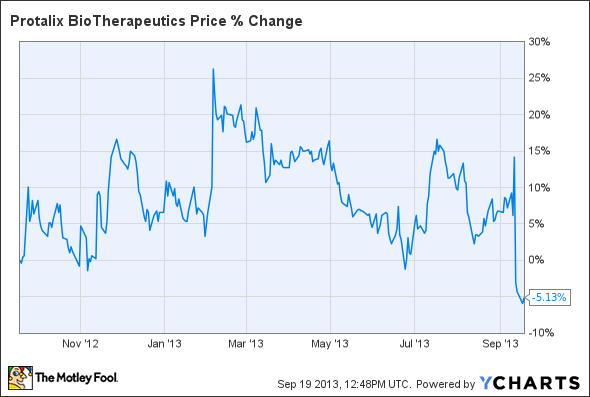 However, it could have one major competitive advantage compared with other up-and-coming biotechs: its novel platform for manufacturing biologic drugs called ProCellEx. Biomanufacturing capabilities may never grab the headlines quite like a new drug blazing the trails of clinical trials, but without them, the biotech industry would cease to exist. Does that alone justify an investment?

It starts from the ground up
Traditionally, when companies speak of their technology platforms for which their operations are built upon, they do so regarding drug discovery capabilities. Some companies may specialize in producing drugs targeting a specific molecular pathway, while others may offer a suite of drugs with varying mechanisms of action targeting a specific disease. Protalix has taken a ground-up approach that begins with drug manufacturing capabilities.

ProCellEx is a revolutionary cell culture system that can produce any number of recombinant proteins (enzymes, cytokines, hormones, and monoclonal antibodies). What the heck does that mean? Biologic drugs are produced using cell culture -- the process of growing living cells under highly controlled conditions -- in hosts ranging from human cells to those of zebrafish. Each has its advantages, but believe it or not, Chinese hamster ovary, or CHO, cells are the most widely used cell line in the industry. Take a look at some of the world's best-selling drugs that have been produced using CHO cells:

The importance of manufacturing is heightened in the biologic industry, where each drug and process must gain marketing approval. You can bet that none of the drugs in that table would have become market leaders if not for a robust manufacturing process. Consider Amgen. The company brings in more than $17 billion in annual sales and routinely notches a profit margin above 25%. To ensure that continues to improve for the long haul, Amgen invests heavily in its biomanufacturing capabilities, including more than $1.2 billion in facilities in Puerto Rico and Singapore. It starts from the ground up.

The ProCellEx advantage
Protalix produces biologic drugs from carrot and tobacco cell lines in a novel bioprocess that uses flexible plastic containers as bioreactors instead of large, expensive stainless-steel vessels. Why go through so much trouble to reinvent a process that works fine with CHO cells? Non-plant processes are difficult to increase in scale. Additional volume must be accompanied by additional capacity in filters, piping, and sterilization -- all of which includes costly and timely regulatory reviews to ensure product safety. By contrast, the modularity of ProCellEx allows for easier additions in an all-of-the-above fashion.

The platform also allows Protalix to break into patent-protected markets -- a new manufacturing process equals novelty -- such as anti-TNF proteins. I fear it may be late to the party, but the market can usually make room for safe and effective therapies. Additional advantages over CHO lines include drastically reduced capital and manufacturing costs, minimal loss of biological activity of proteins, and elimination of post-production modifications of proteins.

These advantages have not gone unnoticed. Pfizer partnered with Protalix and was a driving force in gaining approval for Elelyso -- the company's first product -- for type 1 Gaucher disease. The two were squeezed out of European approval thanks to an orphan drug from Shire but should eventually ramp global sales to $200 million or more. Despite the setback, Pfizer remains committed to Elelyso and its manufacturing process.

Not sold yet?
Protalix isn't the first company to see the value in creating novel approaches to biomanufacturing. Alnylam Pharmaceuticals (ALNY 1.94%) is building a portfolio of intellectual property, through its subsidiary Anylam Biotherapeutics, aimed at disrupting the biologics supply chain. By applying its RNAi technology (silencing genes) to CHO cells, Alnylam can increase the efficiency of biomanufacturing processes throughout the industry by as much as 64%.

The company is still in the early stages of developing the technology, so it should come as no surprise that the majority of its market value is derived from its pipeline. Nonetheless, with the global biologics industry expected to worth more than $170 billion in 2017, the market will begin to fairly account for game-changing technologies from Protalix and Alnylam. It's only a matter of time.

Foolish bottom line
While I don't believe anyone should invest on the prospects of a buyout or science alone, there is enough value in Protalix's platform to justify an investment at current prices. The biggest concern I have lies in the immaturity of the company's pipeline. Current funding should get investors through another couple of years of development, but bringing in additional strategic partners would certainly be a boost to investor morale. Nonetheless, making room in your portfolio today for an innovative manufacturing platform should pay dividends for you tomorrow.

Fool contributor Maxx Chatsko has no position in any stocks mentioned. Check out his personal portfolio or his CAPS page, or follow him on Twitter, @BlacknGoldFool, to keep up with his writing on energy, bioprocessing, and biotechnology.

The Motley Fool recommends Alnylam Pharmaceuticals. Try any of our Foolish newsletter services free for 30 days. We Fools don't all hold the same opinions, but we all believe that considering a diverse range of insights makes us better investors. The Motley Fool has a disclosure policy.

The Simplest Biotech Growth Portfolio Ever

Is This Orphan Drugmaker in Trouble?

Can Protalix Revolutionize This Orphan Disease?

How Far Can $69 Million Take Protalix?