Ford's smaller vehicles have been popular in Europe. Photo of the 2014 Focus courtesy of Ford.

Thanks to Ford's (NYSE:F) recent focus on designing smaller and more fuel-efficient vehicles that can be sold overseas, the company is on track to break even in Europe by 2015 – or perhaps even turn a profit. While the region is still far behind the automotive rebound seen here in the United States, any progress is amazing progress. Ford investors have heard more good news out of its operations in Europe: October brought the company its ninth-consecutive month of improved retail market share, and fifth-consecutive month of increased sales volume. Here are some of the key details and one reason for Ford's shrinking losses. 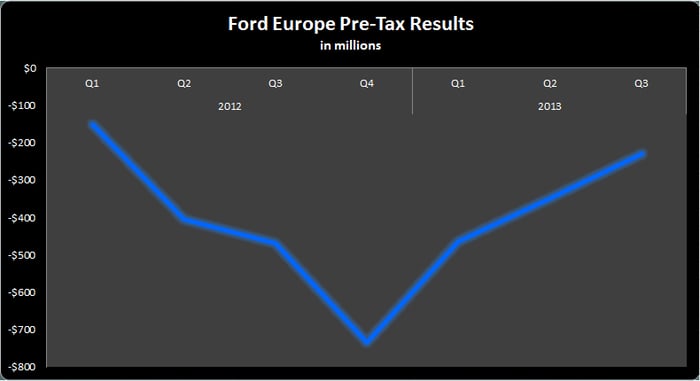 How Ford got here
As you can see, Ford has made much progress narrowing its losses in Europe. In its recent third-quarter report, Ford's management improved its guidance for losses in Europe, saying it now expects losses to be less than last year's $1.7 billion.

Ford previously closed two factories in the U.K. and reduced its European manufacturing capacity by 18%. Ford's substantial reduction in workforce and capacity in the region will likely save the company as much as $500 million annually. There will certainly be more losses in the region; however, if October was any indication, Ford looks like it will continue its trek toward profitability in Europe operations in 2015.

Ford's increase in market share wouldn't be as valuable if the company is simply inflating its sales to rental companies – typically less profitable sales that hinder vehicle resale values.

Fortunately for investors, that isn't the case. Ford's sales to retail and fleet customers increased 500 basis points to 75% of sales, which is two percentage points better than the industry average. Further, that means that Ford's sales to rental companies and dealer self-registrations declined 500 basis points to 25% of sales – a healthy, and profitable, change in its sales mix. This has definitely helped Ford improve its profitability in Europe while the region is still struggling.

Ford solidified its position as the second-best-selling vehicle brand in Europe's traditional 19 markets and extended its lead in the U.K. Ford's year-to-date sales in the former market hit 915,000 vehicles, for a market share of 7.9%. Ford's sales in the latter region are up 9.3% for 330,800 vehicles year to date.

The road ahead
Speaking of the improving retail and fleet sales, rather than rental, Roelant de Waard, vice president, marketing, sales, and service, Ford of Europe, in a press release said, "I am confident we'll see that trend continuing as we accelerate our vehicle introductions with at least 25 new or refreshed vehicles within five years as we go into 2014 and beyond."

As Ford continues to match consumer demand with production capacity, as well as improve its sales mix, look for losses to reverse into profits as soon as 2015. Ford's progress could also be boosted by new vehicle launches including the 2015 Mustang which will finally gallop onto the global stage and could be a hit with overseas consumers. Ultimately Ford is continuing to make excellent progress in a region that has marred its stock price with billions in losses, and that looks like it will end sooner rather than later – great news for patient investors.