However, the bears point out that Inovio hasn't produced a single marketed product since being founded 30 years ago. 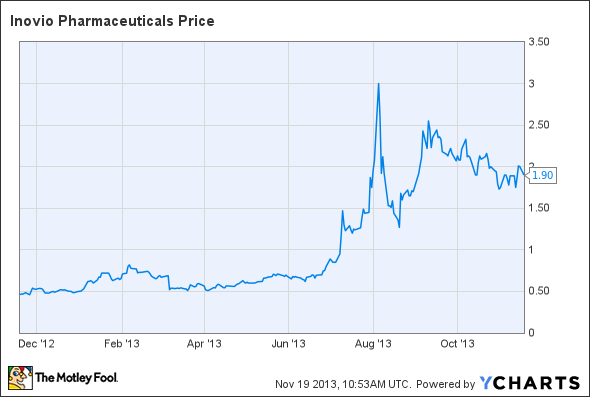 Yet the bulls have been winning: the stock is up nearly 300% over the past twelve months. But it has been a very volatile ride. Let's take a closer look at Inovio, and examine three catalysts which could stabilize this stock and boost it to new heights.

A closer look at Inovio's business
The core of Inovio's business is next-generation DNA-based vaccines which could treat serious diseases such as cancer, influenza, HIV, hepatitis C, and malaria, among others. The vaccines are delivered into the patient's body via its proprietary electroporation delivery technology, which uses brief electrical pulses to boost cellular intake.

Inovio does not expect to generate any revenue for several years, and relies on license fees, milestone revenues, collaborative agreements, grants, and government contracts to cover its research and development costs. The company finished its last quarter with $46.2 million in cash and no debt.

There are two kinds of vaccines -- preventative and therapeutic ones. Preventative vaccines are administered to healthy people to prevent disease from developing, whereas therapeutic vaccines are given to patients who already have been diagnosed with a disease to strengthen their body's defenses.

Although Inovio has yet to create a preventative cancer vaccine that will keep healthy people from getting cancer, it is working on three therapeutic cancer vaccines for five indications.

This points to the first catalyst that investors should look forward to -- its treatment for cervical cancer.

The first major catalyst Inovio investors should look forward to is the upcoming trial data for VGX-3100 in the prevention of cervical cancer, which is expected to be released by mid-2014.

If successfully approved, VGX-3100 will compete directly against the two currently approved vaccines for cervical cancer, Merck's Gardasil and GlaxoSmithKline's (NYSE:GSK) Cervarix, which also protect patients against HPV types 16 and 18. Let's see how VGX-3100 compares to these two treatments.

However, this is hardly a saturated market, and there is plenty of room for a third HPV vaccine, like VGX-3100, to be approved.

The long-term catalyst: The Roche factor
Although most investors are paying attention to Inovio's progress in HPV, it's also important to discuss its therapeutic prostate and breast cancer vaccines.

In September, Roche made an upfront payment of $10 million to Inovio, along with future milestone payments up to $412.5 million, in exchange for an exclusive license for two vaccines -- INO-5150 for prostate cancer and INO-1800 for hepatitis B. Inovio is also entitled to double-digit tiered royalties on future product sales.

Through the partnership, Roche gains a potential foothold in the prostate cancer market, currently dominated by three major treatments -- Johnson & Johnson's Zytiga, Medivation/Astellas' Xtandi, and Dendreon's Provenge -- which are all approved for metastatic castration-resistant cases.

Roche's support was initially seen as a major vote of confidence for Inovio, but the euphoria has since worn off, and shares have fallen 25% since the deal was announced. In addition, Roche is spreading its bets out -- it also signed a $1 billion deal with German company Immatics recently to access its portfolio of development-stage gastric, lung, and prostate cancer treatments.

Nonetheless, any good news from either INO-5150 or INO-1800 will indicate that Inovio is on the right track to receiving more milestone payments from Roche and future market approvals. However, both treatments are in pre-clinical trials, which means that these should be considered long-term catalysts.

The wild card catalyst: Acquisition possibilities abound
The last major catalyst investors should be aware of is Inovio's potential as an acquisition target. With a tiny market cap of $360 million and a clean balance sheet, Inovio looks like an ideal takeover target for Merck and Roche, its primary collaborators.

Much of Inovio's senior management, including CEO Dr. J. Joseph Kim, come from Merck. Since 2004, Merck has held a license agreement with Inovio for worldwide, non-exclusive rights to its electroporation technology for the delivery of vaccines. In addition, Merck has been undergoing a major R&D restructuring effort after a series of major pipeline failures.

Furthermore, Merck's new R&D chief, Roger Perlmutter has declared his intentions to expand the company's oncology portfolio. Merck's best hopes in oncology include its skin cancer treatment MK-3475 and the ovarian cancer drug MK-1775, which is being co-developed with AstraZeneca. With $18.2 billion in cash and equivalents, Inovio would be a compelling investment for Merck as it would instantly add several more promising cancer treatments to its pipeline.

Similar cases can be made for Roche, which could also boost its longer-term oncology pipeline, or GSK, which could benefit from adding another cervical cancer treatment to its portfolio.

The Foolish takeaway
In addition to these three catalysts, investors should not ignore the progress Inovio has made in other areas, suchas its malaria, H7N9, hepatitis C, and HIV vaccines.

In closing, Inovio is not an investment for the faint-hearted or impatient investor. In the near term, there will likely be lots of volatility, since the closest catalyst for the stock is still months away. However, it's definitely a fascinating company that biotech investors should keep their eyes on.