Several types of businesses have been adversely affected by advances in technology, but one that has had a particularly rough time over the past few years have been bookstores. E-readers and the ability to purchase books cheaper online have left little room in the market for brick-and-mortar booksellers. For example, in the four years since I have lived in my current town, the number of bookstores has dropped from five to one.

One of the last surviving bookstore chains, Barnes & Noble (NYSE:BKS) has certainly faced headwinds, but has done much better than its competitors like Books-A-Million and the now-defunct Borders. So far, the company's efforts to embrace and take advantage of new technologies have kept it afloat, but how long will the Nook e-reader and its partnership with Microsoft (NASDAQ:MSFT) keep it going?

The Nook, Microsoft involvement, and the future of Barnes and Noble
For a while there, it looked like Barnes & Noble's retail business and Nook business would be separated into two entities. However, Chairman Leonard Riggio has since dropped his plan to buy the company's 675 bookstores. The company's discussions with Microsoft about selling the Nook Media segment also came to a halt around the same time.

Despite these "negative" developments, Microsoft is reportedly considering increasing its involvement in the company. Microsoft paid $300 million in 2012 for a 17.6% stake in Nook, which would value the Nook business alone at $1.7 billion (bear in mind that B&N's entire market cap is just about $943 million right now).

Is there still a place for physical bookstores in today's marketplace?
The short answer to this question is "sort of." It is certainly true that book sales have suffered as a result of e-readers, but the fact remains that sales in Barnes and Noble stores make up the majority of the company's revenue (64%). When we account for retail sales at B&N's college bookstores, a total of 89% of Barnes & Noble's sales still occur in physical stores, with just 11% coming from sales of e-books.

While this does underplay the success of e-readers (Kindle's market share is about 55% and Apple's iBookstore holds about 20%, leaving just a quarter of the market for Nook), book sales haven't suffered quite as much as you might think. In fact, Barnes & Noble's revenue since the Nook launched in 2009 is quite impressive when you consider how little of the sales come from electronic books. 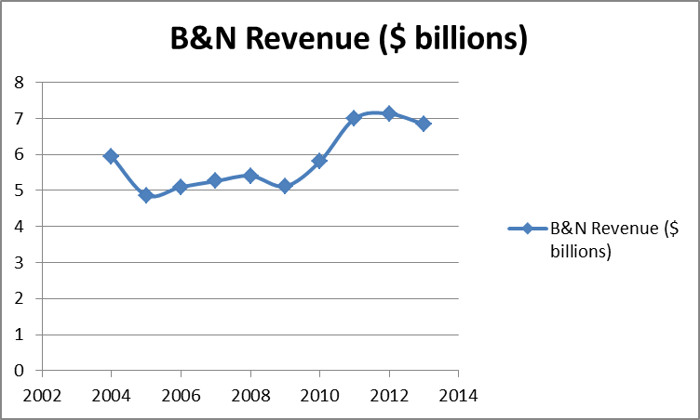 Books-A-Million is the only surviving major bookstore chain that has not really integrated e-reading into its business model, and while it has not had the revenue pop from e-books (which can be seen in B&N's chart from 2009 to 2011), sales have not suffered much. The only real problem is the lack of growth, as Books-A-Million's sales have been extremely flat for the past decade, hovering right around $500 million annually.

When will the company stop losing money?
What the revenue data of these two companies tells me is that there is indeed a place for physical bookstores in the market, but the extent of it has yet to be determined. What will ultimately happen with the bookstores could be similar to what happened with Best Buy (NYSE:BBY) over the past couple of years.

Barnes & Noble is expecting to close 10 to 15 underperforming stores within the next year, and as far as efficiency goes, there are tons of possibilities. Stores-within-a-store have been successful for other companies, and I wouldn't be surprised to see Barnes & Noble explore this route.

So, while this process is playing out, the company isn't expected to be very profitable. In fact, B&N is expected to lose more than $1.00 per share for the next three years before it becomes profitable again.

Buy, sell, or hold?
While Barnes & Noble is certainly not a safe, stable investment, I feel it still offers a lot of value over the long term to shareholders. The company has a leading position in the college bookstore market, and I still think Nook Media has potential, especially with Microsoft in its corner. The bottom line is that as a speculative investment, Barnes & Noble makes a lot of sense at the current, low share price.

Do Bookstores Have a Future Worth Betting On? @themotleyfool #stocks $BKS $MSFT $BBY Next Article
Current