Is it because the company is growing production faster than rivals? Nope, Exxon lags behind its peers. Is it because the stock is "cheap"? Wrong again Bob. Exxon is actually more expensive than many of its nearest comparables.

On the surface, Buffett's purchase of Exxon is a little puzzling.

When people think of big oil, they often conjure up images of massive oil rigs and giant refineries. But perhaps the more appropriate analogy is a giant hamster running on a wheel. In spite of spending $162 billion over the past five years, Exxon's oil production is flat. The company is working ferociously just to stand in place.

And the situation isn't expected to get any better. According to Exxon's own guidance the company's production is expected to grow 14% by 2017, which is only about 2% to 3% annually.

This might be acceptable if Exxon was "cheap." But on most conventional valuation metrics-such as EV/EBITDAX, yield, price to earnings, or price to book, Exxon actually looks a little rich.

So what does the Oracle see in Exxon?
While I'm sure Mr. Buffett does a detailed analysis on every one of his investments, his thesis could probably be summed up by this one chart. 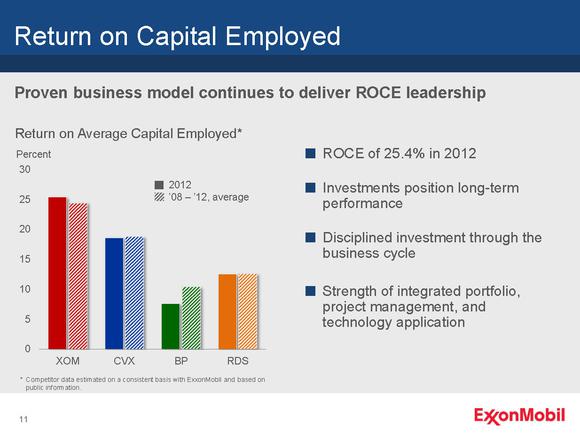 What does this chart show? That Exxon is the best capital allocator in the business.

In the oil industry, we have a handy metric to determine how well a company is managing our money: return on capital employed, or ROCE. The ratio measures how much cash is going into the business versus how much is coming out. And this is important in industries that consume a great deal of capital such as airlines, semiconductors, or energy.

What Exxon has that its competitors don't is discipline. The company only allocates capital to its highest returning projects. If management can't find enough ventures that meet a very high bar for profitability, they will return excess capital to shareholders through dividends and buybacks.

Exxon's rivals, in contrast as evident above, are a little too eager to redeploy that capital into lower return ventures. Guiding over a larger business empire may stoke boardroom egos, but merry executives never funded anybody's retirement.

Sure, like its competitors, Exxon could grow faster. But that would require costly investments, and shareholders may be able to find better returns elsewhere. The fact that management acknowledges this reality is probably the main reason why Buffett chose Exxon Chief Executive Rex Tillerson over his peers.

Foolish bottom line
Buffett's investment in Exxon is an important lesson for the rest of us. As energy investors, we shouldn't be concerned about production growth but production growth per share. It's not about growing the business but generating returns for investors. Sometimes those are synonymous. Sometimes they're not. Exxon understands this better than anybody, and that's why Buffett is investing in the company.

Why is Buffett Buying Exxon? The 1 Chart You Have to See @themotleyfool #stocks $RDS.A $XOM $CVX Next Article
Current