O'Reilly Automotive (NASDAQ:ORLY) has been a top performer in the aftermarket retail space, outperforming the likes of Advance Auto Parts (NYSE:AAP) and AutoZone (NYSE:AZO). The automotive sector has seen a revival of late, with recent trends indicating strength in the industry . The resurgence of the auto industry is good news for all related ancillary and service industries as well.

As a result, all three aftermarket retailers mentioned above have had a good run recently, as shown in the chart below. This is pretty understandable, as the average age of vehicles in the U.S. has grown to an all-time high of 11.4 years , up from 11.2 years and 10.9 years in 2012 and 2010, respectively. Moreover, the percentage of vehicles over 12 years of age has increased by 20 %, leading to higher demand for aftermarket automotive products. 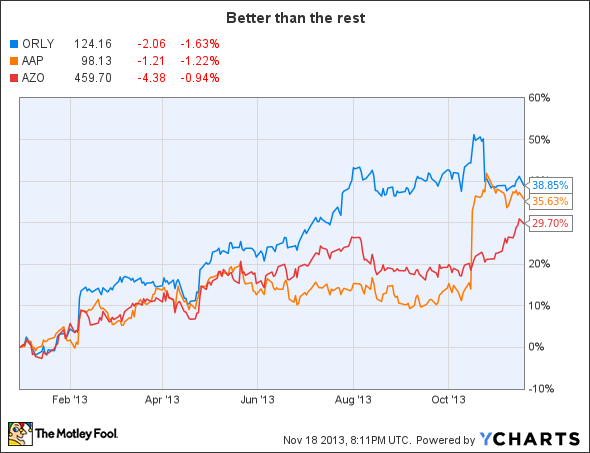 O'Reilly posted a 28% increase in earnings to $1.69 per share as compared to $1.32 per share in the year-ago quarter. The company managed to beat the consensus estimate of $1.65 per share. This marked the 19th consecutive quarter of 15% or more growth in earnings per share.

Plans ahead
Going forward, O'Reilly plans to relocate the distribution center in Lewiston, Maine, to a bigger facility located in Devens, Massachusetts, which will have a capacity to service 280 stores and is expected to be operational beginning in the second half of 2014. This will also act as a catalyst for the company's future expansion strategy for New England. In addition, in 2014 O'Reilly plans to open distribution centers in central Florida and Chicago.

The real-estate group of O'Reilly is busy identifying site zones throughout the Northeast, and is currently in the process of negotiations for potential new store openings in these markets beginning in early 2015. As O'Reilly continues to grow its store network, it will be able to cater to a greater number of old vehicles.

Advance Auto and AutoZone are also making some moves
Just like O'Reilly, Advance Auto Parts has also been performing very well and the company is expanding its network through store openings and acquisitions. Advance Auto's revenue has grown as a result of the acquisition of BWP Distributors and the net addition of 170 new stores in the last 12 months.

Advance Auto also announced the recent acquisition of General Parts International for $2.04 billion. The successful competition of the acquisition by late 2013 or early 2014 will make Advance Auto the largest after-market auto parts retailer in North America.

AutoZone is yet another option for investors to consider if they are looking to invest in the aftermarket retail industry. AutoZone's revenue growth has been decent, with growth rates superior to those of Advance Auto. 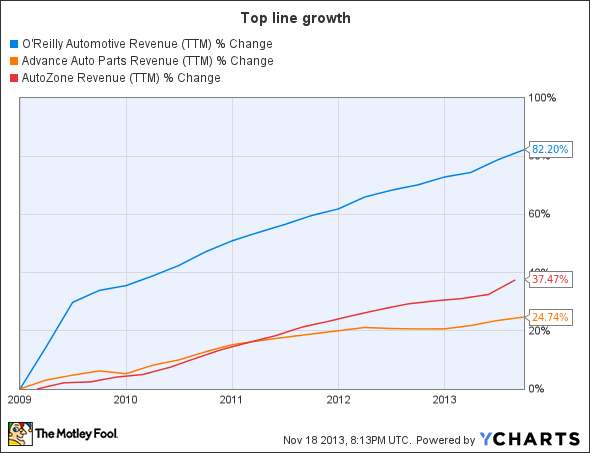 AutoZone has also been repurchasing shares to keep shareholders happy. During the previous quarter, AutoZone repurchased 1.3 million shares for $560 million and still had $468 million worth of shares remaining for repurchase at the end of the fourth quarter. Thus, combined with its store expansion initiatives and shareholder-friendly moves, AutoZone is a stock worth watching in this industry.

Takeaway
Aftermarket retailers should continue doing well as the average age of cars increases. O'Reilly's store growth plan, superior same-store sale growth, and increasing sales per store are some good positives. The stock has been the best of the lot when compared to peers and it could continue gaining going forward on the back of solid strategies and execution.