This year has been very kind to United Technologies (NYSE:RTX) shareholders. Shares of the building systems and aerospace technologist have soared 33% higher year to date, leaving fellow Dow Jones (DJINDICES:^DJI) members in the dust. 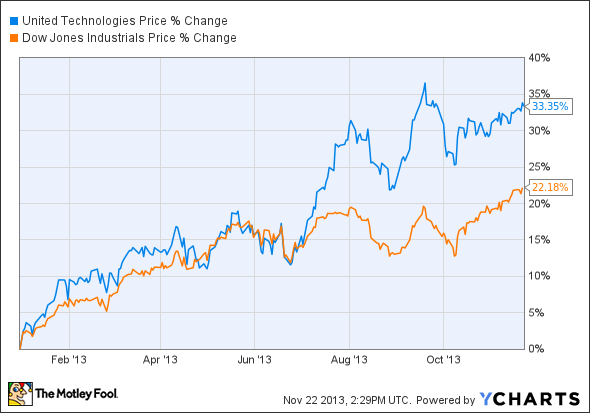 Will 2014 be another great year for United Technologies? Let's have a look at the early evidence.

Starting on Wall Street, analysts generally expect United Technologies to hum along exactly as it has been doing in recent years. Estimates point to roughly 11% higher earnings per share in 2014 on $66.2 billion in sales -- a 5% annual improvement. Three-year estimates assume that these growth rates continue unchanged. All of these figures are consistent with United Technologies' trailing three-year growth rates.

In other words, no big changes on the horizon.

Fellow aerospace titan and Dow member Boeing (NYSE:BA)is crushing the markets even harder than United Technologies right now, with shares rising 78% so far in 2013. Boeing's success rests on the 787 Dreamliner jet, which promises to drive its sales and earnings growth for years to come. The Dreamliner looks good to airline customers because it is amazingly fuel efficient. In an industry of high operating costs, razor-thin margins, and cutthroat competition, fuel efficiency becomes the best selling point I can think of

United Technologies gets to participate in Boeing's Dreamliner growth by providing crucial technologies that make the magic happen.

But United Technologies' aerospace division supplies most of the parts that make up the Rolls-Royce engine, and that's just the tip of the iceberg. All told, United Technologies ships more parts for the Boeing Dreamliner than any other company.

This Dreamliner is big enough for at least two of us
The Dreamliner parts contract is certainly big enough to move margins for United Technologies, even without a direct engine-building agreement.

Here's how it's going to work: Pratt &Whitney will actually add some drag to United Technologies' margins for the next couple quarters, but the deal will be a net positive in the long term.

In a recent earnings call, United Technologies CFO Greg Hayes explained this counterintuitive trend this way: "We saw additional headwind as sales pick up on 787, there's still negative margin there. I think we 'll come down the learning curve on the 787 next year, so that's going to improve."

This situation repeats in Pratt & Whitney's latest complete engine design, the so-called Geared Turbofan PW1000G. Early deliveries of this ultraefficient engine for smaller jets will add headwinds to United Technologies' margins, only to turn around later. "These are great long-term programs that point to a great future for Pratt & Whitney, " Hayes said, "but we'll need to work down the learning curve as these aircraft enter service."

So the Pratt & Whitney segment is paving the way to big profits a couple of years down the road, but taking a hit in the short term. That long-term plan struck a happy nerve with investors in 2013. In 2014, the story should develop as United Technologies drives down manufacturing costs on its new products.

I'd keep an eye out for next-generation technology announcements on both the aerospace and building materials sides of the United Technologies conglomerate. At worst, we're looking at business as usual -- and that's not bad at all.