Dropbox -- a popular service that allows users to share photos, docs, and videos -- has taken Silicon Valley by storm, as the successful start-up plans to raise $250 million in additional funding in the next two weeks, according to Businessweek. The company is apparently seeking a new valuation above $8 billion, which more than doubles the valuation it got during its last funding round, in October 2011.

Even at $8 billion, Dropbox could be undervalued, according to venture capitalist Om Malik, who recently tweeted that the company is on its way to reach $1 billion in annual revenue. With more than 175 million users, the company is not only selling storage to individuals, but also to several corporations. Aware of the strong demand for cloud storage, tech giants Microsoft (NASDAQ:MSFT), Google (NASDAQ:GOOGL) and Amazon (NASDAQ:AMZN) are also in the race, offering more free storage. Which company is more likely to win the cloud storage space? And how does Dropbox plan to remain competitive? 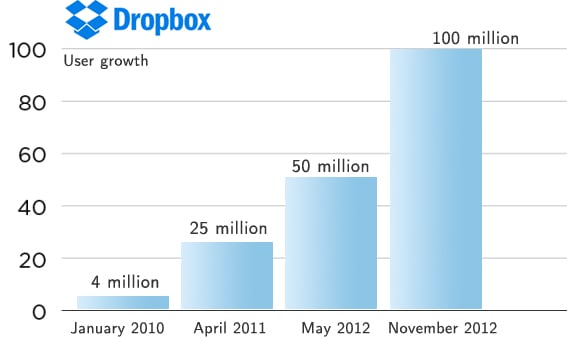 Why Dropbox remains strong
Dropbox's main competitors are Microsoft SkyDrive, Google Drive, and Amazon Cloud Drive. All of them offer more free storage than Dropbox. However, the company has managed to protect its market share due to its easy-to-use, minimalistic user interface.

Before Dropbox, many users considered the process of uploading and downloading files to be quite complex, and technically demanding. Dropbox targeted these users, and provided them with a so-simple-it's-addictive service. This allowed the company to experience fast growth and high engagement from a very early stage. Most of these users are now so accustomed to Dropbox's interface that they won't leave easily for a new cloud storage product.

Microsoft's plan to win the race for supremacy in the cloud storage world
Microsoft is also interested in the cloud storage market. Its SkyDrive product gives up to 10 gigabytes of free storage, and the company has integrated its product to Windows and Microsoft Office, making it easy to save documents for Windows users. In Windows 8.1, SkyDrive is actually the default place to save new documents.

In the middle run, Microsoft will probably use its free storage service to cross-sell its Windows Azure integrated cloud platform, which goes beyond traditional storage, and allows users to create virtual machines or even deploy websites in the cloud.

Google Drive and Chromebooks
To compete against Dropbox and Microsoft, Google Drive is giving up to 15 gigabytes of free storage. Although Google Drive was launched four years after the release of Dropbox, Google has had reception and fast growth, because it offers cheaper plans than Dropbox, more storage for free up front, and integration with a suite of cloud-based apps, including Docs -- word processor -- and Spreadsheets -- similar to Excel.

Google is selling its cheap Chromebooks with a 100 gigabytes Google Drive plan for two years. This clever strategy aims at making users get accustomed to working with Google Drive first, and charge them later.

Amazon's cloud strategy
With $3 billion in revenues from its cloud server farm, Amazon is an important player and innovator in cloud computing. Its long-awaited cloud storage service, Amazon Cloud Drive, was launched less than two years ago. The company also provided a music player that allows users to stream music stored in their account on up to ten devices, and received great early reception.

However, the service has also been criticized for relying too much on Adobe Flash, being relatively expensive, and having limited mobile support. Moreover, in the beginning, Amazon's product lacked the ability of file-syncing, which prevented it from becoming a Dropbox killer.

Final Foolish takeaway
The global cloud storage market will be worth $46.8 billion by 2018. Furthermore, demand for cloud storage is growing significantly faster -- around 50% per year, according to Microsoft -- than storage capacities, which are growing at 25% per year. Big tech companies, hungry for top line growth, cannot ignore this asymmetry. In this context, the ability of developing and marketing a so-simple-it's-addictive service, such as Dropbox, will be crucial to winning this fierce market.