Investors love master limited partnerships because of the lucrative distribtuions they pay out every quarter. By law, MLPs can't hang on to cash. They must pay it out to limited partners, which means that to fund growth, our beloved cash cows have to issue large amounts of debt and equity.

Keeping track of your partnership's debt can be a tad boring, which is why today we're looking at Magellan Midstream Partners' (NYSE:MMP) debt story using three incredibly exciting charts. For context, we'll compare Magellan's data with a few of its peers along the way, including Plains All American Pipeline (NYSE:PAA) and Buckeye Partners (NYSE:BPL).

1. 10-year debt picture
Before we overwhelm ourselves with debt metrics, we should have a solid idea of what Magellan's debt load looks like for the next 10 years. The following chart gives us just that, detailing the partnership's principal and interest payments per year for the next decade. 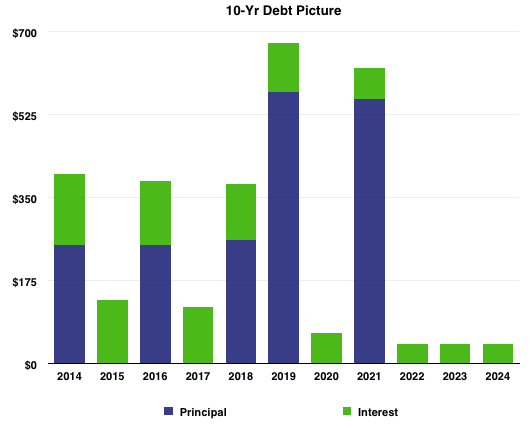 The blue bars reflect the amount of principal due each year, while the green indicate how much Magellan will pay in interest on its fixed-rate debt. The one thing this doesn't capture is the partnership's revolving credit facility, or any floating rate bonds it has issued, because those rates may change.

2. Debt maturity
Looking at an MLP's debt maturities can tip investors off to a few things. First, debt that matures decades from now is more desirable than debt that matures tomorrow. This is especially true right now, when many energy companies are spending big-time dollars bringing major infrastructure projects online. You don't want to have to tack on hefty principal payments in the midst of building expensive new projects. Longer maturities allow these new projects to get up and running -- and generating cash -- before their respective bills come due. The one caveat is the impact duration has on interest rates: The longer the maturity, the higher the rate. Therefore, the ideal debt offering would be for a long-term bond sporting the lowest interest rate possible.

Here's how debt breaks down over time at Magellan Midstream Partners: 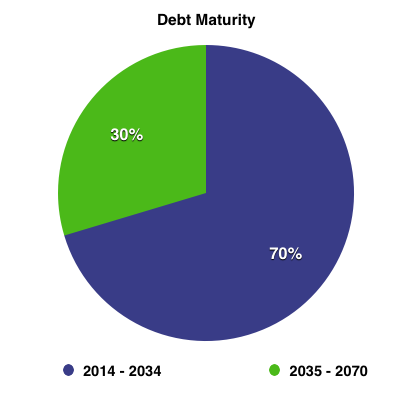 Ultimately, the most important factor is whether or not Magellan is able to generate enough cash to pay its debt off, which brings us to our last chart.

3. Debt to adjusted EBITDA
To determine whether Magellan's assets are generating enough cash to pay its debts, we look to the debt-to-adjusted EBITDA ratio. 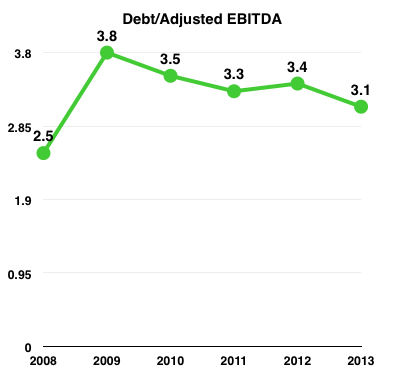 You can see that Magellan is currently carrying about three times as much debt as it earns on a yearly basis. That is a very low number for an MLP; Buckeye Partners currently sports a 4.2 times adjusted EBITDA ratio, while Plains All American is at 3.3 times.

The debt-to-adjusted EBITDA metric is important, not only because it indicates a partnership's ability to pay its debts, but also because credit agencies such as Standard & Poor's rely on it when they issue ratings. The S&P, for example, stipulates that an MLP must have a ratio no higher than 4.0 to 4.5 times debt-to-adjusted EBITDA to achieve investment-grade status. That rating will tie in directly to the interest rates on a partnership's debt, increasing the importance of a healthy ratio.

Bottom line
On their own, these charts don't comprise any sort of buy or sell thesis, but examining the 10-year debt outlook, debt maturities, and debt-to-adjusted EBITDA ratio for a master limited partnership can show you how important a good debt story is to an MLP's future success.

Too much debt can ruin a credit rating if your MLP isn't generating enough cash, making capital more expensive and hurting competitiveness down the road. Successful investing in this space is all about finding an MLP that strikes the right balance between issuing enough debt to spur growth, and developing projects that will generate enough cash to pay it off.