Bitcoin may have just had its biggest breakout week ever. Surviving two Senate panels, impaired exchanges, and political tweets, Bitcoin is on an upward trend.

Here's a recap of the previous week.

Monday
The online cryptocurrency hit a new all-time high, reaching toward $900 per Bitcoin at Mt. Gox, one of the largest Bitcoin exchanges. 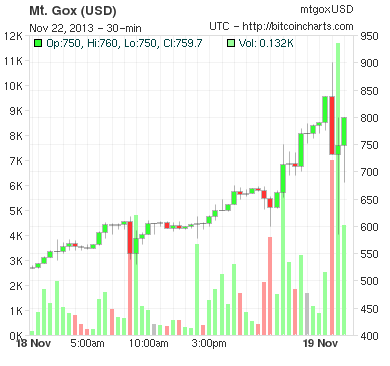 That all-time high came after the Senate Homeland Security and Governmental Affairs Committee held a hearing on the usefulness of Bitcoin. Enthusiasts were happy with what they heard. Several government agencies, including the Department of Justice, explained that Bitcoin had legitimate uses. Many expected the hearing to be a net negative for Bitcoin.

Titled "Beyond Silk Road: Potential Risks, Threats, and Promises of Virtual Currencies," senators discussed Bitcoin and its existence after authorities shut down Silk Road, a popular black market fueled by Bitcoin merchants and service providers. The Washington Post called it a "Bitcoin lovefest."

Bitcoin interest peaked. "Bitcoin" temporarily became the most popular search term on Google across the world.

In a monumental win, at least one politician changed his stance on the online currency. Chuck Schumer tweeted:

This wouldn't be significant if not for the fact that, in 2011, he called Bitcoin an "online form of money laundering."

Tuesday
All the positive news couldn't keep Bitcoin prices up, however. On Tuesday, Bitcoin crashed to a price of $600 each, still on its way to find a bottom. The crash in Bitcoin prices was largely blamed on a downtime at popular exchanges. Coinbase and Bitstamp were out of Bitcoin and offline for much of Tuesday.

The financials team at The Motley Fool bought its first Bitcoin on Tuesday -- all of 0.12 Bitcoins. See how that process turned out to be a little more difficult than expected.

Wednesday
A second Senate committee took a look at Bitcoin. The result? Again, largely in favor of the decentralized currency. In fact, one senator went so far to reach out to the Bitcoin community, speaking directly to enthusiasts on Reddit. Clearly, Washington is learning how much the Internet just loves its Bitcoin.

With the two Senate panels behind it, Bitcoin began to rally again by midday after striking a fresh low of $460 on Wednesday, with prices nearly half off Monday's peak.

Thursday
With Coinbase and Bitstamp back online, Americans new to Bitcoin could buy once again. The price began to rally, closing on Thursday at just under $750 per Bitcoin.

At 3:56 p.m. ET on Thursday, Bitcoin went mainstream. Sandwich shop Subway posted a Tweet of one Bitcoin user's purchase of a sandwich via Bitcoin, adding another big win in its adoption.True story.

I Bought @SUBWAY With #Bitcoin and It Was Awesome https://t.co/xjs4tJaJDs

(No, you can't buy a sandwich with Bitcoin at all Subway locations, but many believe it's a step in the right direction.)

Powered by new buyers, Bitcoin recovered much of its lost ground, closing near $750 per coin.

Friday
Bitcoin is back on track. After starting the week at $525, Bitcoin rallied to $900 by Monday, cratered to $460 on Wednesday, and has since recovered to $779 at the time of this writing.

With the Senate hearings behind it, and no regulation in sight, at least for now, Bitcoin looks poised to continue on its trajectory toward widespread adoption and legitimacy.