Loews Hotels & Resorts recently showed the world that Twitter (NYSE:TWTR) can be much more than a service to view the latest goofy trending topics or a platform for awful celebrities to go on idiotic, hate-filled rants. Twitter can also be an innovative and useful tool for multi-billion dollar businesses to transact with customers.

Only a hashtag away
Earlier this month, Loews Hotels, a subsidiary of the insurance, oil drilling, natural gas pipeline, and luxury hospitality conglomerate Loews Corporation (NYSE:L), launched its new "Loews Hotels Social Reservation" service. This service allows potential guests to book their next Loews hotel stay directly from the Twitter app. The whole Twitter-based transaction is much simpler than calling a toll-free number or navigating a website. Tweeting the hashtag #bookloews to @loews_hotels will begin the transaction. From there, one of Loews' travel planners will respond with a link to a secure chat conversation. Customers can then begin a private chat, book the hotel reservation, and have their payment information securely processed, all on a platform users interact with daily. 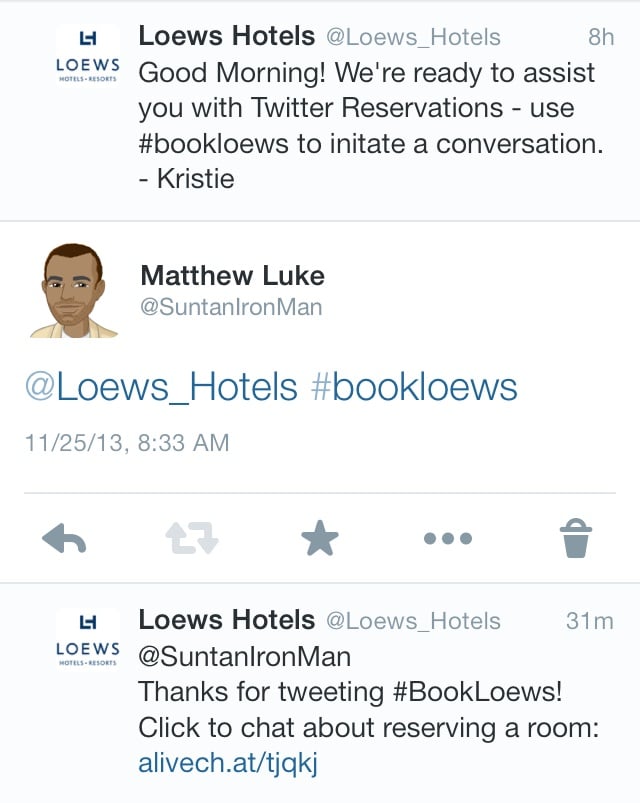 Loews was not the first Fortune 500 company to use Twitter for more than promoted tweets and social media branding. American Express (NYSE:AXP) got the Twitter e-commerce party started earlier this year with the introduction of Amex Sync. This program allows American Express cardholders to sync their cards to their Twitter accounts and receive special discounts for both offline and online purchases. Amex cardholders can even purchase certain items and complete transactions entirely within the Twitter platform.

Still a lot to prove
With the much-hyped initial public offering now in the rearview mirror, and the company currently valued at a market capitalization of over $22 billion, Twitter has a lot to prove to its new shareholders. Despite all the potential and promise of this popular and powerful social media platform, Twitter has yet to actually turn a profit at any point in its short history. Not only has Twitter yet to become profitable -- net loss of $133.8 million for the first nine months of this year -- but the company does not expect to earn a profit until 2015 at the earliest.

Losses at this stage are to be expected from a very young and rapidly growing company. Case in point: As of September, the company has over 2,300 employees, up from only 100 at the beginning of 2010. That is a lot of new hires in a very short amount of time. Clearly, the company is not afraid to make substantial investments in hopes of making a handsome profit in the future. Plus, it is moves by Loews Hotels this month and American Express in February that further legitimize Twitter as something more than an unprofitable 140-character-limit chat platform.

Twitter certainly has many factors working in its favor. In its seven short years of existence, Twitter users -- 232 million actively using the service -- have created over 350 billion tweets. That's 350 billion tweets worth of information Twitter has on its users, allowing marketers to create relevant ads to engage a very specific target audience.

Foolish bottom line
It should go without saying that a young, unproven company valued at $22 billion that has yet to show a single quarterly profit is a risky investment. You will find no arguments about that here. But, with that risk comes a management team that has changed the way the world communicates. That same management team is also quickly finding new and innovative ways to monetize this change in world communication. For those investors more tolerant to risk-taking, Twitter could very well be the next great tech stock to own.