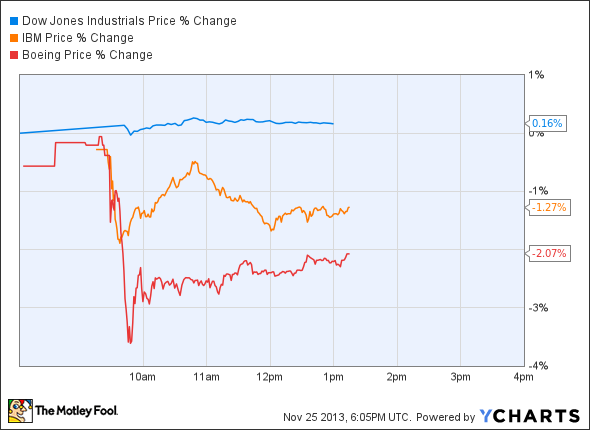 The Dow's gain would be 35 points higher today if not for Boeing and IBM, which carry high stock prices that give the companies undue weight in the Dow. The Dow is structured as a price-weighted index so stocks with high prices get proportionally higher weights. IBM currently makes up 7.25% of the Dow Jones Industrial Average, just behind Visa's 8% and ahead of Goldman Sachs' 6.7% and Boeing's 5.4%.

Boeing is today's worst Dow stock, down 1.88% ($2.55) to $133.40. Over the weekend, the company asked owners of 787 Dreamliners and 747s with General Electric's GEnx engines to avoid high-altitude thunderstorms that can lead to engine-icing problems. Japan Airlines responded by changing the planes it uses on some international flights. The stock's drop is likely an overreaction given recent headlines of Thanksgiving ice storms that are expected to hamper holiday travel on the East Coast. Boeing has had a monster year, with the stock up nearly 18.5% year to date. Fool analyst Dan Caplinger recently took an in-depth look at Boeing's 2013. You can read more here.

IBM is today's second worst Dow stock, down 1.25% ($2.26) to $179.04. The company continues to fall after legendary investor Stanley Druckenmiller revealed at the Robin Hood Foundation investor conference last week that he is short the stock, believing the business will be replaced by newer cloud technology. In an interview on Bloomberg TV, Druckenmiller said, "If you want to be short innovation, be long IBM." Druckenmiller's position is notable given IBM is one of Warren Buffett's largest holdings. The Oracle of Omaha has a tremendous record but has called technology one of his blind spots. It will be interesting to see who the long term proves is right.