If you've followed my musings here at Fool.com over the past year, you probably know Markel (NYSE:MKL) stands tall as one of my favorite long-term investments.

More recently, even though Markel has made a habit of repeatedly delivering solid results, I've asserted over and again my belief that shares of Markel are significantly underpriced -- and I'm certainly not alone in my thinking. Heck, that's why I even added to my personal position in the up-and-coming financial holding company early last month.

Sure enough, the stock has steadily climbed around 6% since then and on Monday touched a new all-time high at nearly $560 per share.

But don't take my word for it ...
Even so, that didn't stop one of the world's most renowned value investors from allowing a huge chunk of his company's money to be allocated to buy shares of Markel.

Investors, meet Markel President and longtime Chief Investment Officer Tom Gayner. To be sure, Markel's board just approved a new share repurchase program covering buybacks of up to $300 million.

Don't get me wrong -- these purchases aren't guaranteed to happen immediately. Remember, the new $300 million replaces a previous share repurchase authorization under which Markel bought around $101 million of its own common stock over the last three years. What's more, Markel's press release states that "management has the discretion to purchase shares at prices that are deemed reasonable in light of circumstances at the time of purchase."

That said, even with the broader market trading near all-time highs, shares of Markel currently sit at a very reasonable 1.2 times book value. For those of you keeping track, that's the self-imposed limit under which Warren Buffett recently told investors he'd be willing to buy back shares of Berkshire Hathaway (NYSE:BRK.A)(NYSE:BRK.B). For some perspective, shares of Berkshire Hathaway are currently trading around 1.4 times book value.

But wait, you say. Why should we believe someone who says his own company's stock is cheap? Isn't that akin to asking a shoe salesman whether you need shoes?

In this case, however, if I were to make a list of folks whose investing "discretion" I trust, Tom Gayner's name would be right near the top. After all, look at how Markel stock has performed relative to both Berkshire Hathaway and the broader market since Gayner took over its investment operations in December 1990: 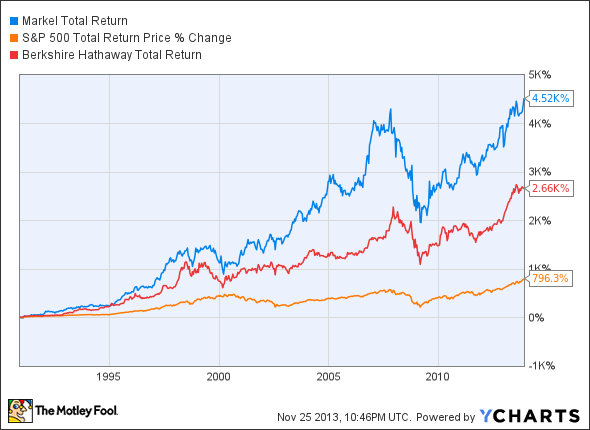 But Gayner doesn't deserve all the credit. Also contributing to Markel's long-term success is its high-quality group of diversified underlying businesses, shareholder-friendly incentive policies, and a talented, highly antonymous management team. Then again, those are also three more compelling reasons investors should be eager to buy shares.

And in case you're wondering just how much longer Markel can keep this up, remember it's still around 37 times smaller than Berkshire Hathaway, which Warren Buffett steered to fame over the past five decades using a strikingly similar business model.

All things considered, and even if my previous conviction wasn't enough, that's why this week's $300 million repurchase authorization solidifies my opinion. Namely, I'm still convinced Markel is set to handsomely reward patient shareholders over the long term.