Utilities in the United States are aggressively building natural-gas powered electric plants. But that same dynamic simply isn't taking place around the world and it's why companies like Peabody Energy (OTC:BTU), Alpha Natural Resources (NYSE: ANR), and Arch Coal (NYSE: ACI) have plenty of upside potential.

Through the looking glass
The environment is one reason why U.S. utilities are switching to natural gas, but taking advantage of a cheap fuel option is an equally important reason for the dramatic shift. That's a big part of why U.S. investors are so down on coal -- it's almost as cheap to burn natural gas.

However, that isn't the case in Germany, where three new coal-fired power plants are in the cards. Why? For starters, the country is trying to phase out its nuclear reactors and the lost power must be replaced somehow. But coal is being favored over natural gas because gas is more expensive to burn, leaving gas plants running in the red.

Peabody Energy, meanwhile, has been talking about China's use of coal gasification. It makes sense for the country to turn coal into a gas because international natural-gas prices are "four to five times that of the U.S." And while Germany is talking about three plants, China is working on 20 coal-to-gas projects. If you are looking at U.S. natural-gas prices and extrapolating that across the globe, you are making a mistake. 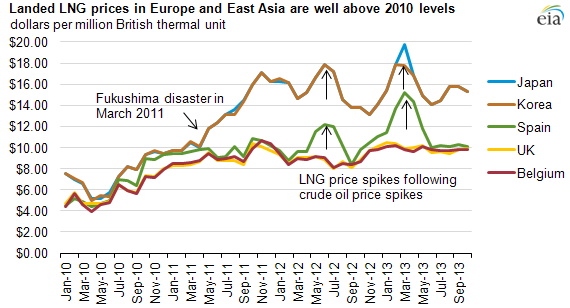 There to benefit
Although there is a global supply glut of coal right now depressing the commodity's price, that will eventually work off. And when that happens, coal miners will be ready to shine again.

Peabody, with operations in Australia and the United States, is poised to benefit. It is perfectly positioned to sell coal into China as that nation continues to use the fuel as a primary source of electric power. And, as global demand heats up, the company's scale in the ultra-cheap Powder River Basin will allow it to export coal from the West Coast to Asia, too.

Interestingly, however, global shipping rates are increasingly hampering coal exports from Australia to Europe. Alpha Natural Resources specifically highlighted this as a positive for met coal. However it is also good news for thermal coal, which European nations like Germany have increasingly been importing from the United States. While Peabody benefits from Australia being close to Asia, Alpha and Arch will benefit from the U.S. being close to Europe.

Met coal accounts for about 45% of the top line at both Arch and Alpha, but the remainder is thermal. So high gas prices in export markets will end up being supportive for this pair. Alpha has more exposure to higher-priced Central Appalachian coal, which is a negative. However, both Arch and Alpha have extensive access to ports, allowing them to ship coal overseas as demand picks up.

Only one country
The United States is a large and important global player, but it is only one country. The low price of domestic natural gas may be a game changer here, but the supply/demand dynamic that has pushed gas prices to historic lows is unique to this country. China, India, Japan, South Korea, and numerous European countries, like Germany and Poland, are still committed to coal.

The coal industry is working its way through the trough of that fuel's supply/demand cycle. Over the long term you should look for global demand to grow for thermal coal. And don't be afraid to stake out a position now in globally diversified giant Peabody or downtrodden Arch and Alpha. When the coal market starts to turn notably higher, it may be too late to jump aboard.