Investors in off-price retailer The TJX Companies (NYSE:TJX) will be very pleased with the company's latest results. Not only were earnings ahead of estimates, but management also guided investors toward some significant developments that should drive the company's long-term growth. There has always been a lot to like about TJX, and now there is even more.

TJX previously guided toward diluted earnings per share in the range of $0.69-$0.72 and comparable-store-sales growth of 2% to 3%, but it delivered $0.75 and 5%, respectively, in its third quarter.

The company has a history of giving conservative guidance, and it arguably did so again this time around. Despite the impressive third-quarter numbers, management reiterated its fourth-quarter forecast of only 1%-2% comparable-store-sales growth, and diluted EPS of $0.77-$0.80. Don't be surprised if it beats projections.

A note of caution
A note of caution came from the outlook provided by a rival off-price retailer Ross Stores (NASDAQ:ROST). In giving its outlook for the all-important fourth quarter, Ross' management argued that the upcoming holiday season "will be the most intensely competitive and promotional holiday selling period in recent years."

One issue that faces the entire retail industry is the six fewer shopping days between Thanksgiving and Christmas this year. In other words, in-store shopping is likely to be more intense, and retailers will fight hard for foot traffic by offering promotions. This is likely to create some confusing signals from the sector.

However, to be fair, Ross and TJX offered up the same guidance of 1%-2% comparable-store growth in the fourth quarter. The difference was that TJX beat EPS estimates in the third quarter, while Ross was only inline.

It was a similar story with Dollar Tree Stores (NASDAQ:DLTR). The dollar store missed analyst estimates for the second straight quarter, and its management spoke of "weak consumer confidence" and inevitably the short shopping season this year. Furthermore, EPS guidance for the fourth quarter of $1.01-$1.07 was weaker than the analyst consensus of $1.10.

TJX's long-term growth prospects
Turning back to TJX, each of its divisions achieved good sales growth in the quarter. 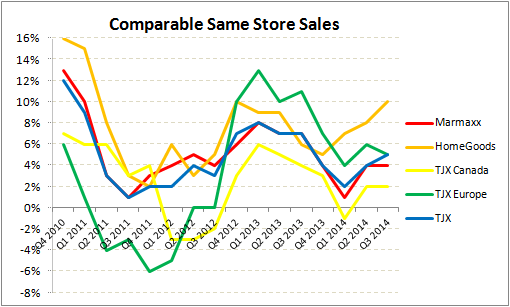 Note that TJX's home goods (10% of total segment profits year-to-date) sales grew much faster than the company average, while according to management Ross' home business "ran at the same rate as the company" in the third quarter. Furthermore, TJX gave some positive updates on its long-term growth plans in three ways.

First, the company's management now believes it can increase its number of stores by 60% to 5,100 stores, with Marmaxx's (73% of segment profits and around 1,966 stores  currently) potential raised to 3,000 locations, some 400 more than it previously estimated.

Second, management declared itself "excited" by its e-commerce plans, and more investment will follow in due course.

Finally, its European segmental margins (6% of year-to-date segment profits) grew to 10.4% versus 9.1% last year, and TJX raised its long-term target to "10%-plus." Considering that Marmaxx has margins better than 15%, it's reasonable to expect that TJX can continue to increase European margins in the future.

Where next for TJX?
It's going to be a tricky season for retailers. The spending environment isn't fantastic, and the shortened selling season will cause great potential for retailers to report mixed signals as the holiday season progresses.

Nevertheless, TJX has consistently demonstrated an ability to appeal to off-price shoppers, irrespective of market conditions. Meanwhile, its long-term growth prospects are getting stronger, and investors should focus on these aspects of its potential rather than the short-term noise created by a shorter selling season.