Warren Buffett's investments in Coca-Cola (NYSE:KO), Procter & Gamble (NYSE:PG), and Wal-Mart Stores (NYSE:WMT) are significant not only because of the Oracle of Omaha's outstanding track record but also because of his extreme portfolio concentration.

Although Buffett's holding company, Berkshire Hathaway, owns 43 stocks in its portfolio, most of its positions are tiny and inconsequential. The largest nine positions account for 81% of the portfolio -- and Coca-Cola, Procter & Gamble, and Wal-Mart are three of those nine. As three of Buffett's top nine investments, each is an important stock for coattail investors to scrutinize.

Always Coca-Cola
Nowadays, everyone "knows" Coca-Cola has a defensible competitive position in the soft-drink market, but the picture was not so clear when Buffett bought his original stake in 1988. Back then, many investors were alarmed by Coca-Cola's declining earnings and feared that the company would lose market share in the years ahead. Of course, the iconic beverage company regained its composure and continues to dominate the industry to this day.

There are several reasons why Buffett still owns a 16.5% position in the company. For one, it has a stable and leading market share. This is evidence that Coca-Cola has been able to keep competitors at bay and keep earning out-sized profits. 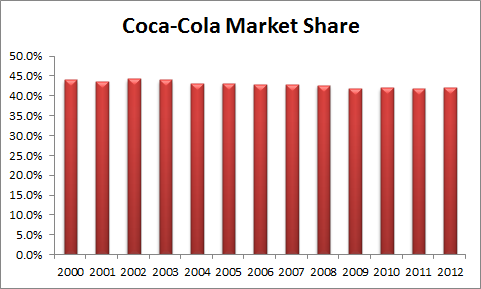 The sources of Coca-Cola's market share stability are its unparalleled distribution network and its second-to-none brand portfolio. Distribution networks are difficult and expensive to build; only PepsiCo has anything close to Coca-Cola's distribution scale in the non-alcoholic beverage industry. As a result, Coca-Cola is able to get its products into more stores and on better terms than many of its smaller rivals.

Coca-Cola's brands include Coca-Cola, Minute Maid, Powerade, and other ubiquitous beverages. The consumer mind share that its brands have attained -- and their low prices relative to consumers' total grocery budgets -- allows Coca-Cola to raise prices and still attract a loyal following of consumers that will not settle for any other brand. A company like this has significant earning power, which is why the Oracle is still bullish 25 years after his original investment.

The ubiquitous Procter & Gamble
Procter & Gamble's brands range from laundry detergent to cosmetics to pet food, but the origin of Buffett's stake in the company is an un-diversified razor-blade company called Gillette. Buffett purchased shares of Gillette in 1989 and held onto the stock until it was acquired in 2005 by Procter & Gamble.

After Gillette was acquired in an all-stock deal, Buffett owned about 100 million shares of Procter & Gamble. Today, Buffett owns only 52 million shares. He started to reduce his stake in 2009 to raise cash for other investments -- eventually acquiring Burlington Northern Santa Fe, among other multi-billion-dollar investments, with the proceeds.

Despite Buffett having reduced his stake by half in the last five years, Procter & Gamble remains a 4.3% position in Berkshire's portfolio. The recession exposed Procter & Gamble's over-expansion during the boom years, which is probably to blame for Buffett's current lack of enthusiasm for the stock. But the company's strong portfolio of consumer brands should enable it to continue earning above-normal profits for decades to come.

Some of its best-known brands include Charmin, Cover Girl, Tide, and Iams -- each is a leading brand in its respective category. As a result, Procter & Gamble's earning power is at least as safe as Coca-Cola's.

Buffett goes to wally world
Wal-Mart is a 4% position in Berkshire's portfolio after Buffett more than doubled his stake in the company in late 2009. If you investigate Wal-Mart's competitive position, it is not hard to see why Buffett loves the company.

Wal-Mart is the largest retailer in the world, giving it unmatched bargaining power in negotiations with suppliers. For many consumer-products companies, Wal-Mart is the single most important customer. This is a powerful position -- one that Wal-Mart is not shy about exploiting.

In addition to being the largest retailer by sales, Wal-Mart is also the largest non-government employer in the world. The company is often accused of paying its employees unlivable wages, but as the only option for many unskilled workers seeking employment, Wal-Mart's low wages are better than no wage at all.

Ethical misgivings aside, Wal-Mart's ability to exploit its bargaining power on suppliers and employees, and its ability to destroy smaller competitors, gives the company a defensible competitive position that will create value for shareholders for years to come.