The Dow Jones Industrial Average (^DJI 1.05%) has wobbled between losses and gains today and as of 3:15 p.m. EST the index is down 0.26%. The only nugget of economic data to point to today was the Institute for Supply Management's factory index climbing to 57.3 in November from 56.4 in October. That's a small improvement and isn't enough to be a big market mover today.

One big factor moving the Dow lower today is a 3.4% plunge in 3M's (MMM -0.71%) shares. Analyst Nigel Coe at Morgan Stanley downgraded the stock from equalweight to underweight today, equivalent to a sell rating on the stock. Analysts can often move a stock short term, but long term it's company performance that will drive a stock. On that front, let's see how 3M stacks up. 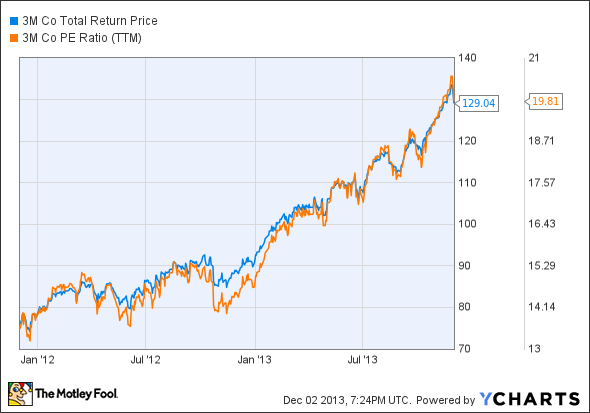 What will drive 3M in 2014?
If 3M doesn't grow sales or earnings significantly in 2014, I could see the stock and its earnings multiple fall. But there's reason to think the growth engine is working again at 3M.

Below I've laid out the organic local currency growth at 3M over the last seven quarters. You can see that growth is trending higher, especially last quarter.

One or two quarters of great growth doesn't make a trend, but if 3M's organic growth continues to be in the mid-single-digits, or higher, then the stock will deserve a higher multiple and may have another good year in 2014.

Pops and plunges are short-lived
Stocks can often pop or plunge after upgrades or downgrades, but they don't drive stocks long-term. In fact, big bank analysts have little incentive to get their calls correct at all, as our in-depth research has found.

Look at this as a data point, but not a reason to either buy or sell the stock. Instead, take the data, like I've laid out above, and decide for yourself whether 3M will outperform the market.

Personally, I think the stock is expensive but with increasing organic growth and one of the most reliable dividends investors can buy, I also think 3M has earned a premium multiple. Whether the stock outperforms in 2014 depends on if that growth figure continues to trend higher or falls flat. We'll see next year whether it will happen.