I think the president has less influence over the economy than most people think. We'll always have recessions and bear markets, booms and bubbles, no matter who is in office. One of my favorite political quotes comes from bank lobbyist Andrew Lowenthal: "Every election I've ever been involved with has been 'the most important election in history,'" he says. "At some point, it's not. It's just the path of history."

But people always need someone to blame, or thank, for the economy, and the person occupying the White House is a natural target. As long as that's the case, the hard facts about how the economy and markets have performed under different presidents are important.

By popular demand, here's an updated chart of the S&P 500 (and its historical equivalent) adjusted for both inflation and dividends. These are average annual returns, so whether a president served one or two terms doesn't skew the results: 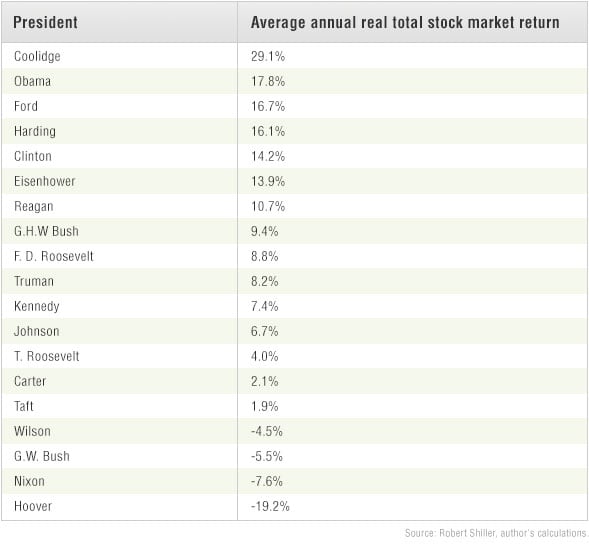 Rather than the president, I think a more meaningful (and shocking) figure comes from the Federal Reserve: Since 1994, nearly all of the stock market's gains have come within 24 hours of FOMC policy announcements.

Last year I looked at GDP growth, inflation, unemployment, and corporate profits under past presidents. You can see those here.