The chain's KFC numbers continue to show weakness, indicating its China woes aren't over yet.

Finally -- finally! -- Yum! Brands (YUM 1.86%) has seen a reversal of fortunes in China, as same-store sales turned positive for the first time in more than a year, posting a 1% gain for November.

But before you get too excited that the chicken joint has turned the corner, there's a major caveat attached to the number: KFC ran a limited-time promotion for a half-priced bucket of chicken that drove the numbers 16% higher for the first 10 days of the month. As soon as the promotion ended, comps plunged once more, tumbling 8% over the next 20 days, indicating it still has massive problems in attracting and keeping customers. Overall for November, KFC's comps were flat.

As has become well-known by now, last December, Yum!'s suppliers were accused of giving chickens unapproved levels of antibiotics and a drug used to treat Parkinson's disease that's banned for use in food. Then it ran into a PR disaster when it was revealed ice cubes it served at some stores were allegedly dirtier than toilet water. The impact was swift and unrelenting: As the chickens came home to roost, its customers flew the coop.

In February, the restaurateur began detailing the sure and steady decline in same-store sales, with monthly releases tallying the dismal losses. It will release December comp numbers in mid-January, and that will be the end of this monthly self-flogging exercise it's engaged in. And while the numbers won't come out monthly anymore, investors can still witness the gory details when they're outlined in the quarterly reports.

While there are a specific set of circumstances that contributed to Yum!'s woes, there are larger forces as well at play, and they're extending to other chains too. McDonald's (MCD 1.77%), for example, has seen its China sales take a hit as fears of avian flu continue to cause consumers to shy away from such plates.

Yet as I noted last month, don't count Yum! out. While its chicken franchise has faltered, its Pizza Hut chain is still going strong, recording 7% growth in China in November. 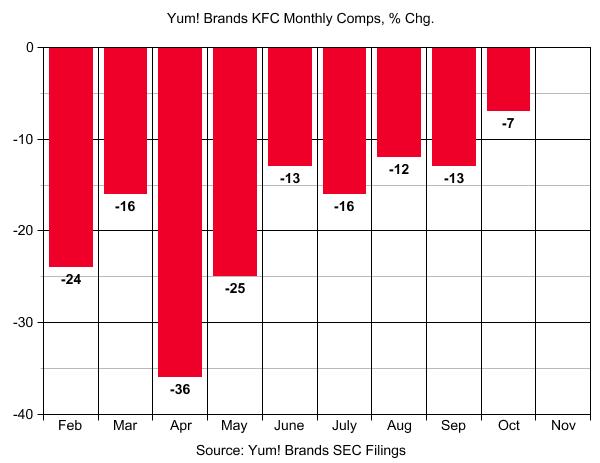 Although they do appear to be improving slightly, it appears the brave face Yum! put on earlier this year when it declared comps would turn positive in the fourth quarter may have been a little too much wishful thinking, particularly if you exclude promotional activity. As the restaurant operator won't be repeating the half-price bucket offer in December, we can expect more bleeding when it issues its final report.

With rivals like McDonald's introducing new menu items to woo customers away from KFC and its sister pizza chain Pizza Hut, Burger King Worldwide looking to open as many as 1,000 restaurants in China over the next five to seven years, and analysts expecting Dunkin' Brands to expand further into China and steal share from KFC, Yum! has additional problems beyond luring customers back into its stores.

The success of the half-price chicken promo shows China's not a lost cause for Yum!, as customers are still willing to still eat its chicken, so it might take future discount offers to keep easing them back in. With the specter of avian flu still a threat and competitive pressures mounting, Yum! could find this year a lost cause because of its China woes -- though with its stock up 20% year to date, it seems the market scoffs at such worries.

True, these will one day be behind it, and as I noted, an investor shouldn't discount the stock, but there's a time and a place for everything, and it doesn't appear this is yet the time to believe it will put these troubles behind it for good.