The U.S. automotive industry continued its strong rebound in November, with its fastest seasonally adjusted annual rate, or SAAR, in nearly seven years. The industry's SAAR rose to 16.4 million in November, which was far above last year's mark of 15.3 million, and well ahead of analysts' forecasts of 15.8 million. 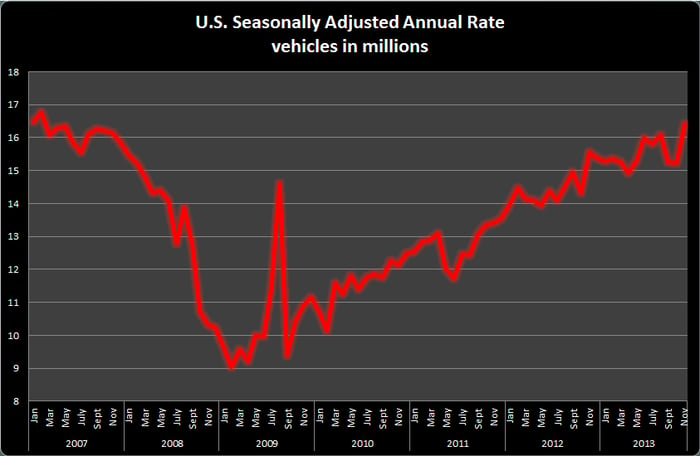 Detroit automakers fared well, with General Motors (NYSE:GM) and Chrysler leading all major automakers with 14% and 16% sales increases for the month. Those results compared favorably with Toyota's, Nissan's and Honda's 10%, 11%, and 0% increases, respectively. Here are some of the details, along with the highlights and what to expect going forward, for all three domestic automakers.

General Motors: 212,060 vehicles sold, 14% increase
General Motors' four brands all performed well, with double-digit sales increases, all above the 9% industry average increase. Chevrolet led the charge in terms of volume, with deliveries topping 145,000 vehicles for a 12.6% year-over-year increase. Next in line was GMC, with more than 35,000 vehicles delivered for a nearly 20% year-over-year increase. Cadillac saw a healthy 11.4% gain to more than 16,000 units, and retail sales have grown in each of the past 18 months, driven by success of its new XTS and ATX models. In terms of volume, Buick brought up the rear for General Motors' brands, with a 13.4% increase to over 15,000 units delivered.

Two of the biggest highlights of General Motors' November sales are its retail sales improvement and full-size pickup results. Even better than the company's overall 14% increase is that it's not due to inflated fleet sales. In fact, fleet sales declined 3% in November while retail sales, typically more healthy sales, were up 19% -- enough to deliver GM's best November in six years.

As always, when full-size trucks are bringing in large sales gains, Detroit automakers reap large profits. That looks to continue as U.S. consumers continue to buy full-size pickups by the droves. While both Ford (NYSE:F) and General Motors topped $3,000 in incentives for its pickups, average transaction prices for the full-size trucks continue to outpace the rest of the industry -- helping protect those juicy margins. GM's Chevrolet Silverado and GMC Sierra sales were up a healthy 12% and 22%, respectively, in November. 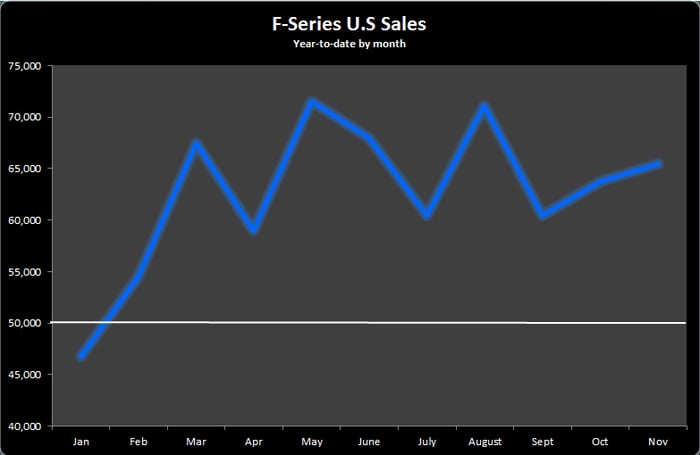 November marks the seventh straight month where F-Series sales topped not just 50,000, but 60,000. Sales of the F-Series surged 16.3% in November, higher than its main competitor, the Silverado, which saw a 12% increase -- and the F-Series is working off a higher base comparison to boot.

Ford's Fusion has brought a flash of style to a typically bland segment. Photo credit: Ford.

Ford's other popular vehicles also posted strong gains, including the Fusion's 51% year-over-year increase to nearly 23,000 vehicles sold -- a record November for the popular sedan. Ford's Escape had a slower result than it's been accustomed to, selling nearly 21,000, which was good for only a 0.1% increase, year over year. However, when digging deeper, the result isn't as bad as it appears. While the overall result is a small gain, the Escape's retail sales surged 9% while its fleet sales declined.

Ford also announced that it will slow its production to 770,000 vehicles for the first quarter of 2014, down roughly 2% from last year's first-quarter production. Ford is aiming to match supply and demand at a time where its inventories are up and planned plant shutdowns for adjustments on new production models.

Chrysler Group: 142,275 vehicles sold. 16% increase
Chrysler posted its best November sales since 2007, led by a 30% sales increase of its Jeep brand. Jeep's huge sales gain was driven by strong results of the Cherokee.

"Our all-new Jeep Cherokee is off to a terrific start, with more than 10,169 units sold in its first full month on sale," said Reid Bigland, head of U.S. sales, in a press release. "Our launch emphasis on Jeep Cherokee quality is now being rewarded with brisk sales and helping Chrysler Group achieve our 44th consecutive month of year-over-year sales growth."

Similar to rivals Ford and General Motors, full-size truck demand helped drive big results in its Ram truck brand, which was up 22% in November. That marks the Ram's best November sales in nearly a decade.

Overall, investors should feel great about seeing domestic automakers move forward into 2014 and beyond. All three are doing better jobs of matching supply and demand and improving operations to increase margins. As the economy gradually improves and credit remains readily available and affordable, U.S. sales should continue to be robust -- providing healthier profits than domestic automakers have seen in years.