If you're an Intel (NASDAQ:INTC) investor, 2013 was a seriously interesting year. Intel shares came into the new year looking troubled and cheap, only to soar in the summer and ride a huge roller coaster in the back half of the year.

This is how Intel shares performed versus its Dow Jones (DJINDICES:^DJI) peers, year to date: 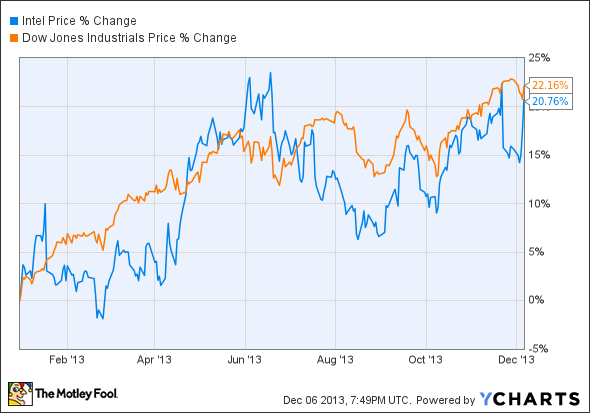 Twelve months ago, the "death of the PC" meme seemed to be written in stone. Because of this toxic idea, Intel traded at less than 10 times trailing earnings last December. The chip maker's shareholders also worried about the company's corner suite, as then-CEO Paul Otellini had announced his retirement without naming a successor.

Intel stuck to a time-honored script. Like Otellini before him, new CEO Brian Krzanich took the route to the top via the COO office. His selection was announced between two solid if unspectacular earnings reports and helped to calm jangly investor nerves. Uncertainty is never fun, you know.

Krzanich's game plan is not drastically different from Otellini's. You'd hardly expect a U-turn from the guy who ran Intel's day-to-day operations for the last three years. But Krzanich's chip manufacturing background is shining through in the back half of his first year.

Intel has always seen its manufacturing expertise as a competitive advantage. It's part of the magic recipe that has held chief rival Advanced Micro Devices (NASDAQ:AMD) at bay, even when AMD had the stronger chip designs in the mid-2000s. AMD could simply never keep up with Intel's relentless manufacturing process improvements, and the smaller company always had to wrangle its chips at a discount to Intel's premium-branded products. That deadly combination makes it nearly impossible for AMD to turn a profit and helps Intel investors sleep at night. 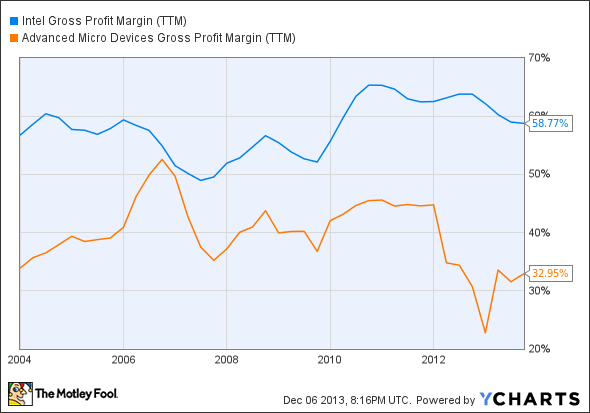 But the mobile revolution changed things, and AMD is no longer Intel's most important rival. If the PC really is dying, AMD would be the first to join the choir invisible. So under Krzanich's manufacturing-minded hand, Intel is looking to spin its process expertise into new markets. Mobile ones, please.

In particular, the rumor mill (and common horse sense) says that Intel wants to build chips for Apple (NASDAQ:AAPL). Not design processors for Apple's iPads and iPhones, but make the custom processors that Apple designs in-house. Winning Apple's business would be huge, given Cupertino's habit of churning out untold millions of units of every new device. And it makes sense, because Apple is not terribly fond of current chip-making partner Samsung. You don't sue the ones you love. Inserting Intel into Apple's supply chain would distance Apple from the South Korean giant even further.

This is a potentially game-changing strategy that every Intel investor needs to keep a close eye on. This year might go down in Intel's history book as the point when the chip foundry business finally matured. Add Intel to your Foolish watchlist and we'll keep you abreast of the whole foundry situation.

The price chart up top comes with two sharp turns near the end. First, Intel warned investors that revenue might look a little flat next year, giving shares a huge haircut. Today, Intel shares moved back up as Citigroup analyst Glen Yeung upgraded the stock to buy.

Analyst writings can often be ignored, but this upgrade makes plenty of sense. Yeung is a veteran of the Intel beat, and his previous hold rating shows that we're not talking about a cheerleader for the company. His analysis points to solid demand for corporate PCs, which should help Intel's revenue meet or beat guidance next year. In Yeung's view, Intel's 2014 projections are "sufficiently conservative."

And that's where we stand today. Intel shares have largely kept up with the Dow in 2013, albeit along a very bumpy road.