Please ensure Javascript is enabled for purposes of website accessibility
Log In Help Join The Motley Fool
Free Article Join Over 1 Million Premium Members And Get More In-Depth Stock Guidance and Research
By Harsh Chauhan - Dec 7, 2013 at 8:00AM

Stiff competition from Dollar General and Family Dollar Stores is hurting Dollar Tree Stores. Should you invest now, or wait?

Dollar Tree Stores (DLTR 0.13%) might not have figured on Kantar Retail's list of least expensive places to shop, but the stock has surely become cheaper over the past few days. Dollar Tree has dropped close to 3.5% after its third-quarter results turned out to be a disappointment. A weak outlook, and the fact that Dollar Tree's two direct competitors -- Dollar General (DG 0.20%) and Family Dollar Stores (FDO.DL) -- were among the top three least expensive places to shop in the Kantar survey look like ominous signs for investors.

In a tight spot
Dollar Tree management cited cautious consumer spending and weakening consumer confidence, along with a shorter holiday shopping season as reasons behind its weak performance. The Thomson Reuters/University of Michigan consumer confidence index has declined over the past few months, dropping to 72 in November from 73.2 in the prior month, and this isn't good news for retailers.

In addition, six fewer selling days this holiday season are expected to impact Dollar Tree's sales to the tune of $25 million. The company's same-store sales are expected to improve in the low-single digits in the ongoing quarter, and might be close to the 2.4% growth seen last year.

Are Dollar General and Family Dollar Stores eating its lunch?
Dollar Tree had issued weak guidance at the end of the second quarter as well, which means that the best performing dollar store stock this year is now under pressure. Its revenue growth seems to be slowing down as bigger rival Dollar General further strengthens its position in the segment.

Despite being the largest dollar store chain of the three, with more than 11,000 stores, Dollar General has been reporting the fastest growth. Dollar General's same-store sales had increased 5.1% in its last reported quarter, while the revenue jump was even more impressive at 11.3%. In comparison, Dollar Tree's same-store sales grew 3.1% and revenue increased 9.5% from the year-ago period, and it has slightly less than 5,000 stores in operation.

Dollar General's aggressive store expansion strategy -- it is on track to open 650 new stores this year -- and rapid addition of consumables to its product portfolio seem to be working well for it. Dollar General is now carrying tobacco in all its stores and this is further aiding sales growth. According to management, two-thirds of customers who purchase tobacco bundle their purchase with one or more items.

Also, Dollar General has been refreshing its store format to make them more customer-friendly. This has also played a part in improving sales growth as customer feedback has been positive. What's more, Dollar General was the least expensive place to shop in the Kantar Retail survey.  Thus, with a mix of a low pricing and aggressive growth strategies, Dollar General seems to be hurting Dollar Tree.

Dollar Tree is installing coolers in its stores at a fast pace and has already exceeded its target this year. It has installed coolers in 566 stores so far, and now offers frozen and refrigerated products in 3,115 stores. This is important since management expects this category to drive higher traffic into its stores, along with sales of its higher-margin items.

Dollar Tree is looking to reach more customers -- through store openings and its e-commerce platform. The company has increased its online product offerings by 40% this year and this has worked well. Traffic to Dollar Tree Direct, its online business, increased 25% in the previous quarter and topped 5.6 million unique visitors. Dollar Tree claims to be the leading retailer in the U.S. at the $1 price point, and this could work in its favor in a challenging environment as it reaches more customers.

Then again, Dollar Tree is focused on growing profitably, and that's why it hasn't been focusing on lower-margin items such as tobacco. To make its operations more efficient, it opened a new 1 million-square-foot distribution center in Windsor, Connecticut, earlier this year, and recently completed the expansion of the Marietta, Oklahoma, distribution center to 1 million square feet.

These initiatives could help Dollar Tree grow both revenue and margins going forward. In fact, Dollar Tree's gross margin has held its ground while both Dollar General and Family Dollar have been struggling as seen in the chart below. Dollar Tree's earnings growth has been historically superior, and investments in distribution centers and focus on higher-margin items might help it keep this advantage in the future. 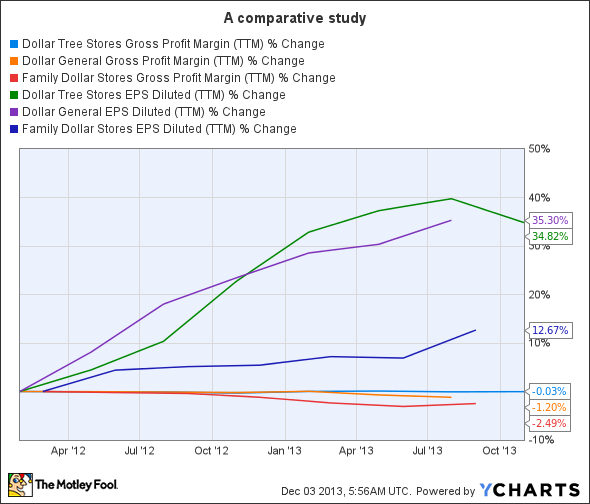 Also, Dollar Tree is likely getting more traffic as compared to Family Dollar, the second-largest dollar store. Family Dollar's same-store sales are expected to decline in the low-single digits in the ongoing quarter, a steep drop from the 6.6% growth that it had reported in the year-ago quarter. In its last reported quarter, Family Dollar's same-store sale performance was woeful as the metric stayed flat while management had initially guided for 2% growth.

In comparison, Dollar Tree seems to be better off, probably due to its focus on $1 items and impressive e-commerce growth. But, Dollar Tree doesn't look like a good buy at the moment. Shares are up around 40% this year, outperforming even Dollar General that's gained around 30%. As such, Dollar Tree is now relatively expensive with a trailing P/E of 20.3 and PEG ratio of 1.20 that exceed Dollar General's metrics.

Final words
However, Dollar Tree could get back to its superior growth ways once again considering its strategic moves. Writing it off after a couple of quarters doesn't make sense. Hence, depending on the risk profile, existing investors could continue to hold the stock or take some money off the table given its solid run this year. On the other hand, potential investors should wait and watch for signs of stronger numbers from Dollar Tree.