The term "hands-free" is starting to have an entirely new meaning.

Two of the tech industry's big dogs are on the cutting edge and have developed amazing new devices that push the boundaries of what's currently possible. Google ( GOOGL -0.60% ) and Microsoft ( MSFT -0.15% ) have successfully created "touchless tech" -- devices that allow users to interact with each other, their computers, other wireless devices, and the Internet -- all without lifting a finger.

Look, but don't touch
The most well-known of these touchless tech inventions is, by far, Google Glass. Without getting too deep into technical specifications, Glass projects images onto clear lenses in front of the wearer's eyes, creating the equivalent of a 25-inch HD screen viewed from eight feet away. With this device, it's possible to browse the web, check email, view pictures and videos, and interact with a plethora of new apps. Most interaction is through Bluetooth voice commands, although a small touchpad exists for additional controls.

Possibilities are endless for a product like Glass, allowing almost completely hands-free operation and the ability to see both a "computer screen" and your surroundings at the same time. The addition of prescription lenses sometime next year should lead to significantly greater sales in the future. Business Insider projects an estimated "21 million units in annual sales by year-end 2018," which could be "a $10.5 billion annual market opportunity" if Glass is sold for $500 per unit. 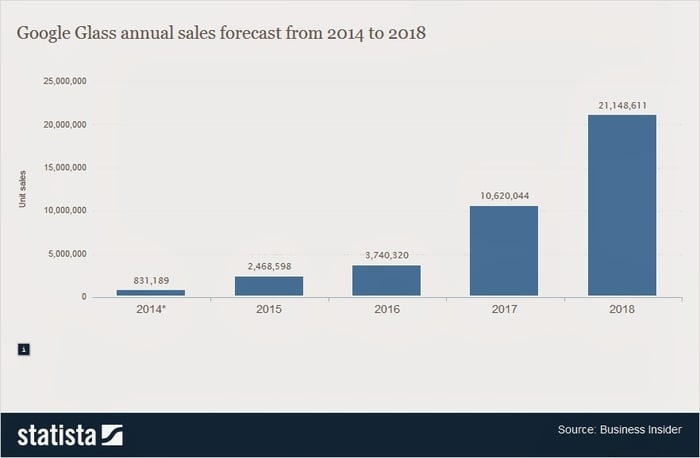 With a market cap approaching $352 billion and earnings per share of almost $35, Google's $1,050 share price still has room to grow. Two Baird analysts recently raised their price target for Google to $1,175 and Goldman Sachs raised it to $1,125. Once Glass hits mainstream markets at a realistic price point, I'd expect Google investors to reap the benefits.

Watching your every move
Microsoft has made impressive advances with its Kinect device. The Kinect, designed specifically for use with the Xbox video game console, contains a high-resolution camera that enhances a user's gaming experience. According to InfoWars.com, "The Xbox One's array of microphones and video cameras can distinguish between six different voices in a room, while responding to voice commands and reading skeletal and muscular movements. The device can even tell if someone is looking at or away from the television." With the integration of Skype technology into the Xbox One, Kinect allows users to video chat with other gamers and people around the world.

Now, thanks to "three crucial innovations coming with Xbox One Kinect," namely the device's ability to "recognize some points of facial expression and body movements, including discernment of fingers and the rotation of hands," Kinect can detect sign language and translate hand motions into printed text displayed on another user's screen -- or even more impressively, into spoken words played through another user's speakers. The implications of this technology are far-reaching, beyond simply facilitating easier communication for the hearing impaired.

Unfortunately, since the Kinect device "is almost as expensive to produce as the console itself," and only $28 of the $499 retail price of each Xbox One is actually profit, there's a chance that Microsoft might actually realize losses approaching $1 billion this year due to extreme competition from Sony's PlayStation 4.

What's up Apple's sleeve?
Possible revolutionary advancements in how we interact with computers can easily be imagined considering the Kinect's existing capabilities. Factor in Apple's ( AAPL -0.32% ) ability to develop innovative, cutting-edge technology, and it came as no surprise when news was released last month that the company acquired PrimeSense for $360 million. PrimeSense is the small Israeli-based tech company responsible for developing the sensors used in the Kinect device.

While Apple has remained tight-lipped about the reasons for the acquisition, rumors and speculation abound regarding the possibilities, which include significantly advanced capabilities in everything from an iTV to an iWatch to the next-generation iPhone. There have even been rumors that Apple has plans to turn the Apple TV into a game console. Apple's entry into a new product category would definitely please its shareholders.

Foolish final thoughts
Advances in the way we interact with computers and other tech devices continues to evolve at a rapid pace that pushes the boundaries of possibility. What was once thought impossible has become a familiar reality, and each new technological development raises the bar and sets a new paradigm. Companies like Google, Microsoft, and Apple have remained at the forefront of such evolution, continually impressing us with new inventions and upgrades to existing ones.

While the battle for consumer dollars will never end, all three of these companies -- in their struggle to gain profit and market share -- will play a major part in furthering technological evolution and making science fiction a reality. These innovative leaders make solid candidates for every portfolio.