Intuitive Surgical (NASDAQ:ISRG), the company that popularized robotic surgery over the past 13 years, has had a tough year.

Declining sales of its da Vinci systems, commonly used for minimally invasive prostatectomies, gynecological procedures, and cardiac valve repair, led to speculation that demand for its $1.5 million machines had peaked. Meanwhile, medical professionals and the FDA have voiced doubts regarding the efficacy, cost effectiveness, and safety of the systems.

As a result, shares of Intuitive Surgical have fallen more than 24% since the beginning of the year after soaring 2,300% over the past decade. Are Intuitive Surgical's best days behind it or is this just a momentary lull, which could be a lucrative buying opportunity for long-term investors? 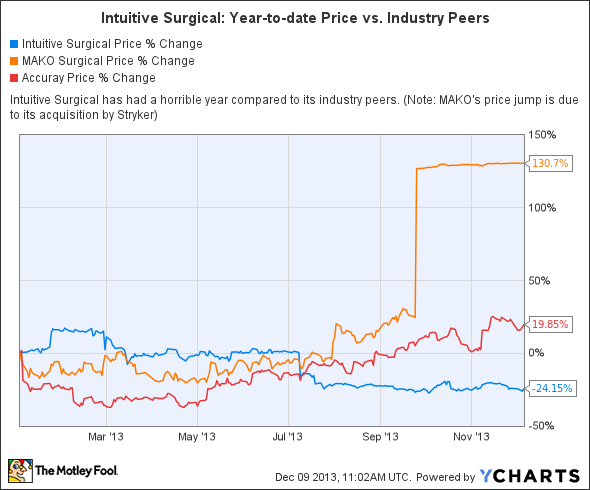 To answer that question, let's take a look at three key investing lessons we learned from Intuitive Surgical in 2013.

Lesson No. 1: Demand for robotic surgeries is surging
Intuitive Surgical's da Vinci system was initially approved for laparoscopic surgery in 2000 by the FDA. Since then, it has been approved for many other indications, and it has made a profound impact on the market for robot-assisted surgeries.

Between 2000 and 2012, the number of worldwide robotic surgeries surged from 1,000 to 450,000. Robotic surgeries are less invasive than traditional methods, resulting in less blood loss, smaller scars, and a shorter hospital stay.

Surgical instruments, controlled by the da Vinci's arms, enter the patient's body through small incisions and are controlled via a console by a surgeon. The impressive, next-generation nature of the da Vinci system has made it a top product for hospitals to carry in order to attract more affluent patients.

This has opened the door for other makers of surgical robots, such as orthopedic surgical system maker MAKO Surgical (NASDAQ:MAKO.DL) (recently acquired by medical device giant Stryker (NYSE:SYK)) and Accuray (NASDAQ:ARAY), the maker of a cancer-cutting laser system known as the Cyberknife.

However, Intuitive Surgical remains the 800-pound gorilla among these industry peers, as seen in this comparison of market caps and annual revenues.

Lesson No. 2: Multiple sources of revenue don't mean much if they all rely on one product

All those factors are positive catalysts for Intuitive Surgical, which reports revenue in three segments -- systems (da Vinci surgical robots), instruments and accessories, and service fees.

Last quarter, da Vinci systems accounted for 32% of the company's revenue, instruments and accessories comprised 48%, while service fees made up the remaining 20%. Of those three segments, only systems revenue declined.

Unfortunately, this has been a year long trend for Intuitive Surgical -- demand for those pricy da Vinci systems apparently peaked three quarters ago, as seen in this review of system sales over the past year.

In other words, hospitals like using the da Vinci system, but there's not much market demand for new ones to be installed. In the short term, this won't matter since Intuitive can still rely on its other two business segments, but in the long term, it must boost system sales to continue growing its top line.

A study published in the Journal of the American Medical Association revealed that the median hospital cost of a robot-assisted hysterectomy was $8,868 -- 33% more expensive than a traditional laparoscopic hysterectomy, but offered little added benefit for the cost. However, critics acknowledged that the da Vinci system indeed caused less blood loss and scarring.

Unfortunately, that was only the start of Intuitive's problems. The FDA noticed that 70 deaths related to robot-assisted surgical procedures had been reported since 2009, and initiated a probe of Intuitive Surgical in March. It found that Intuitive Surgical had warned patients and doctors regarding possible problems with its systems without notifying the FDA first.

A recent draft FDA analysis linked the da Vinci system to "an overall increasing trend in the rate of death and injury reports" since 2004, recording 4,798 adverse events in the U.S. that resulted in 85 deaths, 414 injuries, and 3,402 device malfunctions.

As a result, Intuitive Surgical is dealing with high-profile injury lawsuits from 33 patients, a report that a cracked instrument in the system could cause internal burns and a new warning that friction could cause the da Vinci's arms to momentarily stall.

In times like these, great expectations easily turn into panic. However, Intuitive Surgical's fundamentals should set a floor for the stock price. If Intuitive Surgical had been a more speculative company without solid revenue and earnings growth, its stock would have fallen far more than the 24% that it lost this year.

For fundamental investors, Intuitive Surgical's plunge could represent an exceptional time to invest. 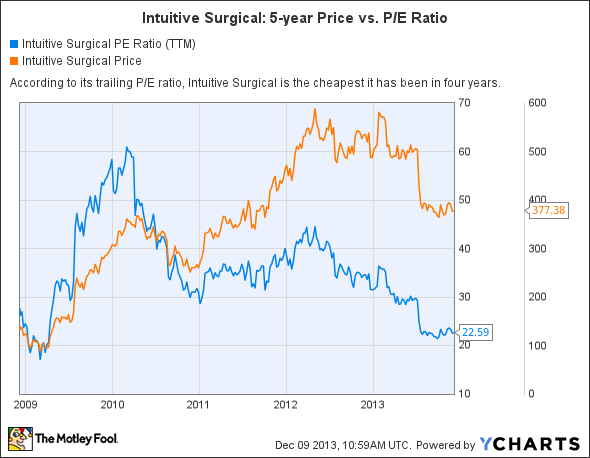 Intuitive Surgical's trailing P/E ratio of 22.6 represents the cheapest that the stock has been since 2009. Over the past five years, its P/E has declined 18.3% while its price has soared 169% -- two clear indications that Intuitive Surgical could be an undervalued growth stock.

The Foolish takeaway
Looking ahead into 2014, the most important thing for Intuitive Surgical is to assure doctors, patients, and investors that the da Vinci system is the a cost-effective and safe choice for minimally invasive procedures. If it can survive this ongoing storm of negative PR, Intuitive Surgical has a very good chance to reverse its slumping system sales and get back on track.

In closing, Intuitive Surgical could be one of those undervalued stocks to buy "when others are fearful," since it is still the undisputed market leader in the growing market for robot-assisted surgeries.