Apple only just launched the location-based technology in its retail stores, but Major League Baseball and others have big plans for iBeacon.

There's been a lot of chatter about Apple (AAPL -2.54%) launching iBeacon in its retail stores. The location-based technology can help customers find products, display product info, and provide indoor mapping services on iPhones at retail stores. But much of the media coverage made iBeacon out to be some sort of marketing gimmick for Apple retail stores, when it has the potential to be much more than that.

Shining a light on iBeacon
iBeacon was briefly introduced at Apple's Worldwide Developers Conference back in June, but the company has been rather quiet about the technology so far. That's because it's only beginning to see implementation -- Apple itself only launched it last week.

So what is it? iBeacon is a software update to all iOS 7 devices that uses Bluetooth technology for location-based signal and information sharing. iBeacon uses Bluetooth low energy, called BLE, that allows devices to send out location signals almost constantly with very little battery usage. While Bluetooth allows users to send lots of data wirelessly or stream music to a set of speakers, BLE can only send and receive a very small amount of data. 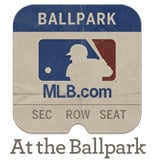 Apple is using the tech to give customers more information about products they walk past -- letting them know if they qualify for a device upgrade -- and display pick-up information if customers are coming to the store to get a device they ordered online. But the tech can be used for much more than just Apple's own retail stores.

One example of iBeacon's potential comes from Major League Baseball's implementation of the technology into a few stadiums for the 2014 baseball season. Back in September, MLB showed how its At the Ballpark app using iBeacon can take iPhone users directly to their seats, offer discount coupons when a user steps into a merchandise store, or even potentially automatically display the customer's ticket on their iPhone as they approach the stadium. In addition to MLB testing out iBeacon, Macy's is testing the technology at its New York and San Francisco stores as well.

Upending NFC
One of the major opportunities for iBeacon is its chance to become the mobile payment system that near-field communication, or NFC, has failed to live up to. NFC works only with a small percentage of Android devices that actually have NFC chips installed in them, and works only in close proximity to sensors used for payments. iBeacon, on the other hand, can broadcast up to 150 feet, which could allow for customers to simply leave their phones in their pockets and automatically pay as they walk out of the store.

Unlike near-field communication, iBeacon works with existing Bluetooth technology that's already found in the vast majority of smartphones. It can also be implemented into current apps, like the MLB At Bat app, and doesn't need its own app in order to send and receive data. Unlike many other Apple endeavors, iBeacon uses open technology that can be implemented by Android devices and developers after software updates.

For Apple investors, iBeacon represents the opportunity for the company to transform how the retail industry interacts with customers and possibly how they pay for their products. It's Apple's way of using its devices and software to not only create a new experience for users, but a way to ensure its services stay ahead of mobile trends. If Apple implements mobile payments into this system, it's possible the company could collect a small percentage per payment, like other mobile payment processors do. But for right now, investors need to keep tabs on how well Macy's and MLB do with iBeacon, and if other retailers and companies start jumping on board with the service.

Fool contributor Chris Neiger has no position in any stocks mentioned. The Motley Fool recommends Apple. The Motley Fool owns shares of Apple. We Fools may not all hold the same opinions, but we all believe that considering a diverse range of insights makes us better investors. The Motley Fool has a disclosure policy.