Investors may not want to order a double of this distiller's stock just yet.

The world, it seems, has rediscovered the simple pleasure of drinking whiskey. If there was one area of Brown-Forman's (BF.B 0.45%) second quarter earnings report that deserved a toast, it was the distiller's Jack Daniels brand, which saw sales jump 10% from the year ago period all across its price points and brand extensions.

From its Tennessee Honey to Gentleman Jack, the distiller saw smooth, double-digit growth in whiskey, while its super premium bourbons Woodford Reserve grew sales 27%, and sales at Old Forester rose 16%.

Unfortunately, the rest of Brown-Forman's spirits products couldn't keep up with the pace whiskey set. Its Herradura tequila might have risen 7%, but the segment's ready-to-drink offerings tumbled 16%, Finlandia vodka was up only 1%, and Southern Comfort fell 4%.

The distiller's efforts would likely have been even better but for the toll a weak economy exacted on consumer confidence, which led drinkers to pull back from dining out. Brown-Forman said that despite its off-premise sales remaining strong, on-premise drinking at bars and restaurants lagged, negatively impacting trends.

That's not surprising since the industry analysts at Technomic say on-premise channel volume grew just 0.7% in 2012 and was expected to decline this year and next. At the same time, though, they found that drinkers wanted to tap new, complex flavors leading them to try premium products, but they've chosen to drink them at home.

While Brown-Forman's results would seem to confirm that, Technomic further suggests trends that could prove worrisome. For those willing to pay up at the bar, people were ordering Irish whiskey more than any other adult beverage, followed by craft beers and vodka.

When it reported interim results back in October, organic sales growth for Diageo (DEO 0.47%) came in below analyst expectations largely because of market changes in China, a decline in Europe, and a disappointing wine portfolio, but it was still able to see its largest division, the U.S. spirits business, power on with better than 5% growth in North America.

In particular Ciroc and Ketel One vodkas led the way, heavy favorites anyway since Diageo owns 25% of all vodka production, representing one of the fastest growing drink niches. Additionally, its Scotch whiskies like Johnnie Walker, Buchanan's, and Talisker maintained market dominance. 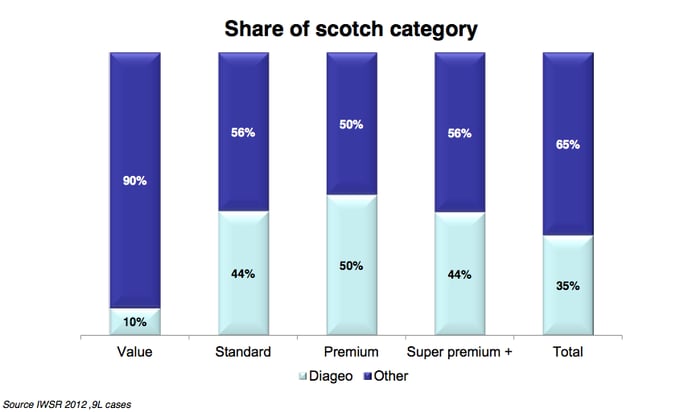 Diageo also plans on introducing two new ultra-premium bourbons, Orphan Barrel and Blade & Bow, which mimics the trend seen in the "browns" market and other distillates. Beam's (BEAM.DL) Maker's Mark saw a heady 17% spike in comp sales as well this past quarter.

Further proof the Technomic data is on course is the change in fortune Boston Beer has witnessed in its flagship Samuel Adams craft beer. After years of seeing depletions fall quarter after quarter, it's put together two straight periods of rising sales.

For Brown-Forman then, it's become heavily reliant on its Jack Daniels brand to carry the weight of its operations, and while a formidable opponent, it faces considerable challenges from Diageo, Beam, and Pernod Ricard.  With the distiller's stock having already bounced some 25% off its 52-week lows investors may want to consider going on the wagon for awhile.