General Electric (NYSE:GE) gave itself a radical makeover in 2013. The company finalized the sale of NBC Universal ahead of schedule and used the unexpected $16 billion cash infusion to go on a shopping spree.

GE heads out of 2013 with a tighter focus on industrial operations, fewer noncore distractions, and a net debt load that's $21 billion lighter.

How did this transformational year set General Electric up for 2014? Let's have a look at what's coming up for your favorite industrial conglomerate and Dow Jones (DJINDICES:^DJI) component.

What's the story?
CFO Jeff Bornstein set the stage very clearly at GE's investor day last month. "We continue to stress simplification," Bornstein said. "In 2014, we still plan and will continue to invest in simplification. And we will do that ahead of gains. So we will spend more in restructuring in 2014 than we have in gains. In 2015, we expect gains to run ahead of restructuring. And over the two-year window, for those two things to more or less pay for one another economically."

This simplification program is more than just cost-cutting and shedding some extraneous business units. "This is a cultural change inside our company about how we run GE," Bornstein said. Running a lean business model is part of that vision, sure, but there's more.

Working through that complex puzzle is at the top of GE's agenda, not just in 2014 but over the next several years. As much as the company changed in 2013, you should expect plenty of additional transformative moves in the near future. Bornstein and CEO Jeff Immelt are "re-architecting the backbone of the company," the CFO said, from internal processes to building the right synergies between customer-facing operations.

Next year most definitely will not be "business as usual" for General Electric. The deep-reaching makeover will hold back 2014 earnings somewhat, starting from a projected 2013 run rate of roughly $1.64 per share. Some of the changes toward a leaner-and-meaner GE will hurt next year.

Patience, young grasshopper!
The big payoff comes in 2015, when the new, slimmer cost structure and more coherent company structure start to pay dividends. Bornstein hopes to see $0.15 per share of bottom-line boosts in 2015 from this overarching strategy, which should largely make up for what will have been lost (English lesson of the week: hello, future perfect!) to the same project in 2014. From that point on, the reformed GE can refocus on revenue growth with a more efficient earnings conversion under the hood.

So 2014 might be a good year to keep an eye on GE for moments of temporary weakness. Pouncing on these buy-in windows might not help you beat the Dow in 2014, but should pay off handsomely in the long run. General Electric's shares have stuck fairly close to the Dow in recent years. Management has a big, bold strategy that could help GE investors separate from the pack and start beating the market. 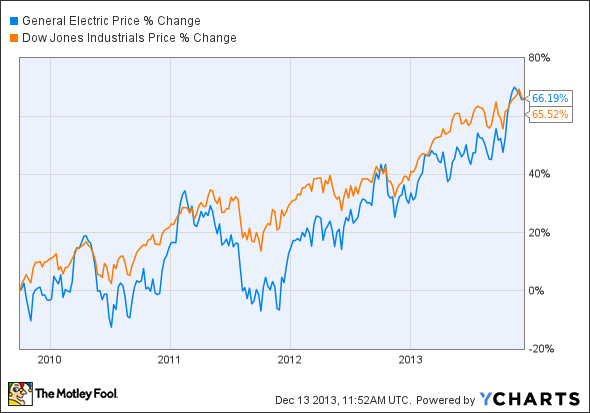