The retailer's stock has lost more than half its value even as rivals Macy's and Nordstrom have gained ground. What's behind J.C. Penney's epic collapse? Find out here.

Retailer J.C. Penney (JCPN.Q) has had an abysmal 2013, with its 57% drop so far this year leading the ranks of decliners in the S&P 500 despite the stock market's gains of more than 25% during the same period. Fellow department store rivals Macy's (M 1.91%) and Nordstrom (JWN -3.64%) have found ways to boost their share prices in the same retail environment that Penney faces, yet despite its turnaround efforts, Penney simply hasn't been able to regain its footing. Let's take a closer look at J.C. Penney has done so badly and whether it can finally turn things around in 2014 and beyond.

What crushed J.C. Penney stock?
Put simply, 2013 has had investors waiting for yet another shoe to drop all year long. Just as it seemed that the retailer had finally hit bottom, some new piece of bad news came out to send the stock lower still.

The first piece of bad news for Penney came when it reported its quarterly results for the 2012 holiday season in late February. Total revenue plunged 28% on a 25% drop in same-store sales, closing a fiscal year in which the company lost almost $1 billion. Although many investors had been willing to give then-CEO Ron Johnson the benefit of the doubt until the critical holidays approached, it became apparent in comparing Penney's results to Nordstrom's and Macy's results that Johnson had largely missed out on key growth drivers like direct Internet-based sales. The retailer's holiday failure led to Johnson's ouster in April.

Yet even with former CEO Mike Ullman reassuming the top executive's seat, Penney wasn't able to keep investors' confidence. Activist investor Bill Ackman, who had acquired a huge position in Penney, decided in August to quit the board and then sold off his entire 18% interest in the retailer. In doing so, Ackman got back about $500 million of his original investment, locking in a loss of $470 million from what he paid for the shares three years early. 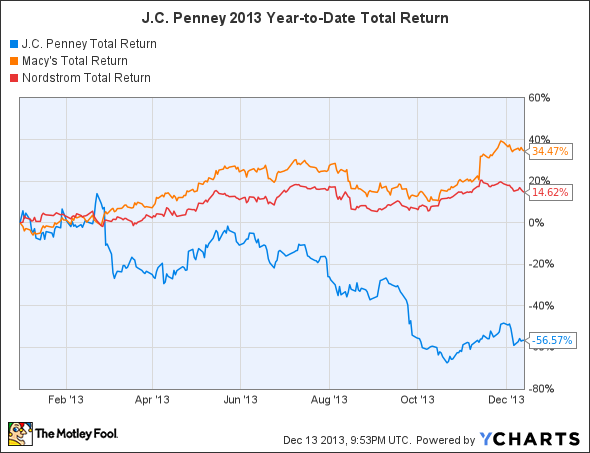 One reason that Ackman and others lost confidence in Penney came from the retailer's unfortunate about-faces on some key issues. For instance, when Penney got a five-year loan from Goldman Sachs in May, investors assumed that the proceeds of the $2.25 billion loan would be ample to meet Penney's cash needs. Yet just months later, Penney tapped the capital markets again, this time with a highly dilutive stock offering of 84 million shares at $9.65 per share. Particularly damaging was the fact that Ullman had said just before the offering that the company wasn't looking for new financing, with many investors deciding that they couldn't believe what Penney said any longer. Rumors that Penney was considering bankruptcy sent shares tumbling even further.

Since hitting lows below $6.50 in late October, though, Penney has rebounded modestly. Investors took positive comments about the retailer's coming fiscal third-quarter earnings report to heart, and even though those results included a 5% drop in revenue on 4.8% lower same-store sales, shareholders seemed to focus on the tiny 0.9% comps gain for the month of October. Yet even when J.C. Penney announced earlier this month a stunning 10.1% jump in same-store sales for November, the stock couldn't hold onto its gains and have now slid 15% just since the beginning of December.

What's next for J.C. Penney?
Obviously, the current holiday quarter will mark a key turning point in J.C. Penney's future. With terrible results last year, comparisons should look incredibly strong even if Penney doesn't come close to recovering all the ground it lost during the 2012 holiday season. Macy's and Nordstrom have performed solidly throughout the year, yet some other competitors have noted that the holiday season this year is more competitive than usual, with substantial discounting wreaking havoc on margins. If Penney can build on its November same-store sales growth, it could get investors feeling better about the retailer in the short run.

Longer term, though, Penney still faces the huge problem of getting back to profitability and convincing its customers to return and start buying again. After such a long period of trying to eliminate that fundamental aspect of what defined Penney for so long, it's hard to predict whether customers will believe J.C. Penney when it tries once again to make its discount model work

Click here to add J.C. Penney to My Watchlist, which can find all of our Foolish analysis on it and all your other stocks.

Fool contributor Dan Caplinger has no position in any stocks mentioned. You can follow him on Twitter @DanCaplinger. The Motley Fool has no position in any of the stocks mentioned. We Fools may not all hold the same opinions, but we all believe that considering a diverse range of insights makes us better investors. The Motley Fool has a disclosure policy.

Why Macy's Stock Jumped on Thursday
358%